Four years ago, John would have described himself as a “cat person.”  They’re low maintenance, independent, can be left alone on a weekend away, and are to be admired for their flippant, unaffected attitude.  I would have considered myself a “horse person” having grown up with horses as the primary focus of my life.  I had no relationship with human or animal closer than the one I had with my quarter horse, Jack, and caring for him took up all the hours that school and sleep did not. 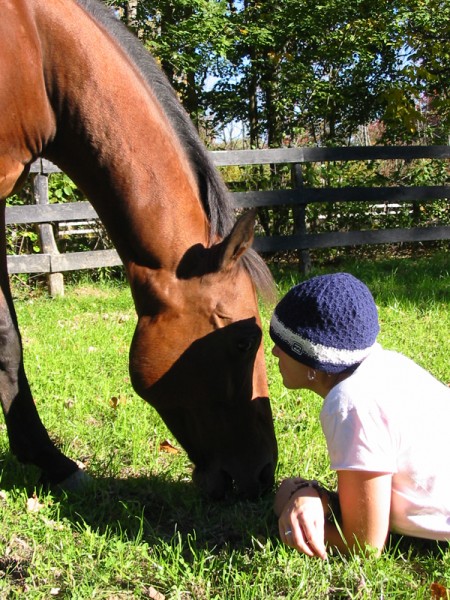 Dogs have always been a part of my life, but they were farm dogs or family dogs – not mine to train or to really concern myself with, but fine to pet and be around when they were there. In truth, most dogs that I knew were not particularly useful or well behaved.  You couldn’t ride them and showing them seemed very boring  (I didn’t know about agility then.)  Even our borderline aggressive family dog was not fit to go anywhere out of our house or yard, due to a lack of strong leadership and socializing.

I spent my talent and deep interest in animal behavior and psychology working with horses and learning their habits and brains.  I had aspirations to be one of the top riders and trainers in the country and was willing to clean thousands of stalls to get there.  The inner workings of dog brains remained a mystery until college.

When I moved to school, I gave up the horses almost completely.  Jack stayed with my mom, also a rider.  I knew he was in good hands, but I no longer had the time and access I had grown accustomed to.  Acclimating to my new life as an art student at Ohio University dominated my time, and I didn’t see how there was room for anything else.  However, I knew that a life without animals was NOT for me.  For the first time in my life, I turned my attention to a species that would fit in my college apartment and my modest budget – canines.  The moment I was out of the dorms and in an apartment, a boyfriend’s dog, Killer, moved in (with the landlord’s permission) and my crash course in dog psychology began.

This was in 2006, right around the time that Cesar Milan’s “The Dog Whisperer” started airing on National Geographic.  I decided to watch an episode while channel flipping one afternoon, expecting it to be lame and hokey with some touchy-feely explanation of a dog’s feelings and past life.  Needless to say, I did not have high hopes or expectations, but these feelings were quickly distinguished as I watched.  He was using the same techniques I had spent the last 15 years learning and applying with horses.  Cesar was just applying it to a psychology I didn’t understand, but the basic rules were the same:  Energy, consistency, repetition, and a reward system of affection and positivity.  I learned quickly thanks to my training background.  Although it might sound overly dramatic, I can honestly say that my world would never be the same.  I was learning to speak dog.

Killer, a basset/wire hair jack russell by our best guess, had grown up on the boyfriend’s horse farm and was already decently well-balanced.  He was a great dog to start with and over the year and 1/2 that I had him, I learned a great deal.  But, as happens with most college relationships, he and I split up and Killer went with him.  I was dogless for the next 6 months or so.

John and I had been best friends for the last 3 years, and that summer we started dating.  We took a trip to Italy with the Art History department and spent the rest of the summer as pre-college advisers for the School of Art.  There was little time to be a dog owner that summer, but I spent almost all of my free time on petfinder.com looking for the right dog. 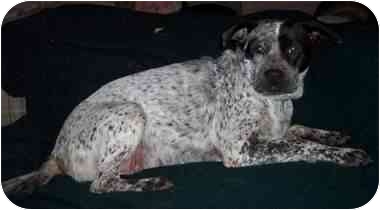 the first picture I ever saw of Grace- it was with her petfinder.com ad

I sent many email inquiries, but the following message about a dog named “Ellie” sent to Stephanie at Camelot Puppy Sanctuary ended up being the important one:

“Hello, my name is Kait from Athens, Ohio.  I have been searching dogs for adoption for a few weeks and have come across Ellie.  I am looking for a
companion and shadow, a dog that I can (or will someday be able to) take
everywhere with me, and then to hang out with in the evenings.  Ellie
sounds like she may be a pretty good match.  I would like to know how she
is with cats and other dogs.  I have 2 cats and because I would be taking
her around with me, it would be good to know how well socialized she is.
Any additional information would be appreciated!  Thank you.  -Kait

This was her response:

“Hi Kaitlin, Ellie has pretty much just been here at the Sanctuary for about
1 year..there are no cats here, but she pretty much leaves everything alone
and is very social with the other dogs, but she has a very strong energy, so
no one ever challenges her.(her nick name is Momma TANK)  She is quiet, laid back, loves to be groomed and sleeps at the foot of the bed.  She really has no bad habits, and everyone that meets her loves her, because she is so unusual.  You would probably just have to come visit and see what you think..she is just hard to describe, sort of un-dogley~
I imagine that she would be fine in cars, and really is fine about
everything.  She loves to go walking and sometimes carries a toy with her.  If you would like to make an appointment to meet her, just let me know when, and i will send directions to our Sanctuary.
And thanks so much for your consideration of a Rescue Dog~
Stephanie”

and she sent these photos along with the email: 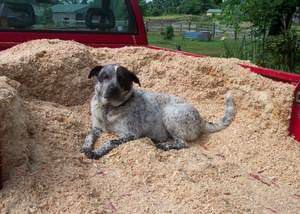 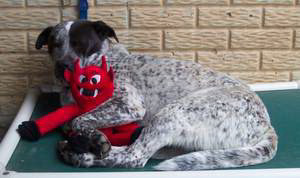 John and I visited and met Grace – still called “Ellie” or “Mamma Tank” at the time – and decided to bring her home at the end of the month when our schedules settled down.  We re-named her “Grace” in the car on her way home from Camelot.  We just kept suggesting things to each other, name after name, but she picked up her head and pricked her ears when John said “what about Grace?” Done.  Grace it was.  Over the next 2 years, first I, then John and I, worked with her and took her everywhere – class, the bank, friend’s houses, camping, the bar, the park, anywhere she was allowed.

We learned quickly that the more she experienced, the more she looked to us for guidance and stability.  She learned to be calm regardless of where we were or what was going on.  John and I, her people, became her constant – not the house we lived in, or the yard behind it.  These lessons were applied to Max when John brought him home from Camelot Puppy Sanctuary 2 years later. 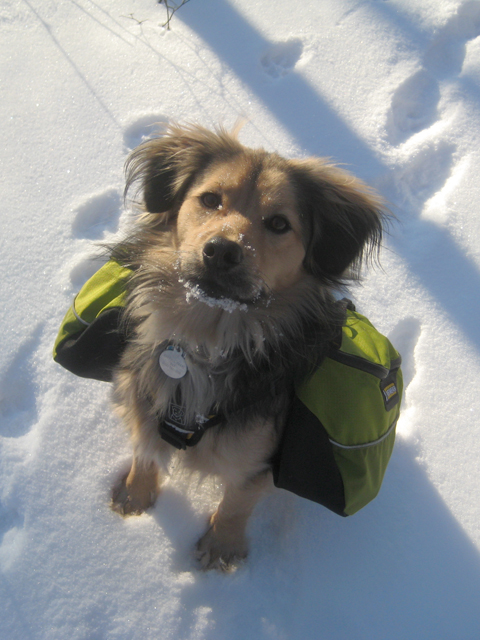 Since then, our team of four has traveled all across the US.  We have lived many lives in many places.  We have lived in 8 different houses in 3 different states and visited 20 others (and Canada).  We have seen the Grand Canyon, both oceans, cities, farms, and everything in between.  Through it all we have kept our dogs at the center of our lives, as they bring us closer to the world around us.  They have remained well-balanced, well-adjusted, well-behaved dogs every step of the way – a fact that we attribute to simply taking them everywhere and immersing them in our lives.  We have taught them what we know with patience and dedication, and they continue to teach us more about ourselves with every adventurous day.

If you are looking for a new dog friend, please consider a rescue!

Camelot Puppy Sanctuary, located in McArthur, OH, can be reached at:  http://www.petfinder.com/shelters/camelotpups.html

One Response to A beginning