John and I took a great deal away from getting to meet Linny, Walter, and Sojourner, but there are a few specific things that changed an idea to walk cross-country into something we see as being possible.

When they left LA, they had an idea for a route, but nothing concrete.  They also had money saved for the journey, but knew that they probably didn’t have enough to make it the whole way without additional support.  They left California with little more than a mission, faith, and each other.

So how did this all work out for them?

The whole trip went incredibly well, thanks to the kindness of strangers.  Everywhere they went the whole way across the country, they were met with open arms, homes, and stables.  Everyone they encountered was so enamored by this crew, their positivity, and dedication to their mission and to one another.  They wanted to help in any way possible.  Some offered them beds and a stall for the night.  Others fed them, gave them gear, or simply handed them a few dollars to help them on their way.  This Human family that is the American People came together over this little group of pilgrims and looked after them through all 8 1/2 months and 3,700 miles of their trek.

Linny’s stepfather, Stephen, had only intended to man the phones from his home in L.A. for the first week or two of their journey.  He called ahead for them the first day, and then the next, and then the next.  It went on like this until the day he and I spoke on the phone seven months later, and it continued through the final days of their travels.   All he had to do was tell the story of their journey, and we – everyone – asked what we could do to help.  Stephen was an integral contributor to their success, and very much a member of their team.

They also had no sponsors when they departed.  The sponsorships they earned were picked up along the way.  They learned that the farther they went, the more credibility they gained.  Potential sponsors could see that they were already well on their way, not just theorizing.  Their horse feed was sponsored, much of their horse equipment, the campgrounds and other various places they stayed, etc.  The complete list of sponsors and links to their web pages is available on the left side of her blog at http://linnykenney.blogspot.com/

And of course, we must give credit where credit is due:  Walter volunteered to drive the support truck, full of horse feed and camping gear, all the way across the country.  By Linny’s account, he was an endlessly patient and motivated navigator and custodian to her and Sojourner.  John’s suspicion is that he knew one way or another that this journey was as much for him as it was for Linny.  What started as Linny’s dream became his dream as well.  He was generous and gave of himself, but he was at all times immersed in the journey, an active participant in manifesting their collective Dream.  Everyone should be so blessed as to have a Walter.

While everyone has their own methods, it was an incredible gift to speak with Linny and Walter and hear not just that they found a way to make it possible, but specifically what they were able to do that made it possible.  For the right mission and with the right attitude, help is not just available – it is waiting for you. As John and I experienced, we felt elevated by simply being able to support Linny and Walter and their mission.  We gained the faith that walking across the country is not just a pipe dream; it is in fact possible, and it will change our lives.

When we leave the East Coast next year, we will leave with a cause, a plan, and hopefully a handful of sponsors and supporters that will grow along our way.  Every step we take even now brings us one step closer to San Francisco. 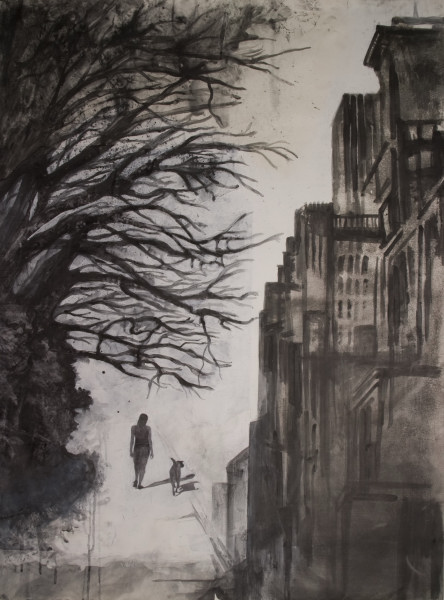 -Continue to build the website/blog

-Begin making local therapy visits with the dogs (Max and Grace passed their exams last month and our paperwork is almost complete!)

Thank you Linny and Walter for showing us how this dream could be possible.  You brought us the courage we had yet to find ourselves.  This walk is possible because of you and your journey, and the lessons you taught us along your way.

One Response to Lessons from Linny