practice what you preach 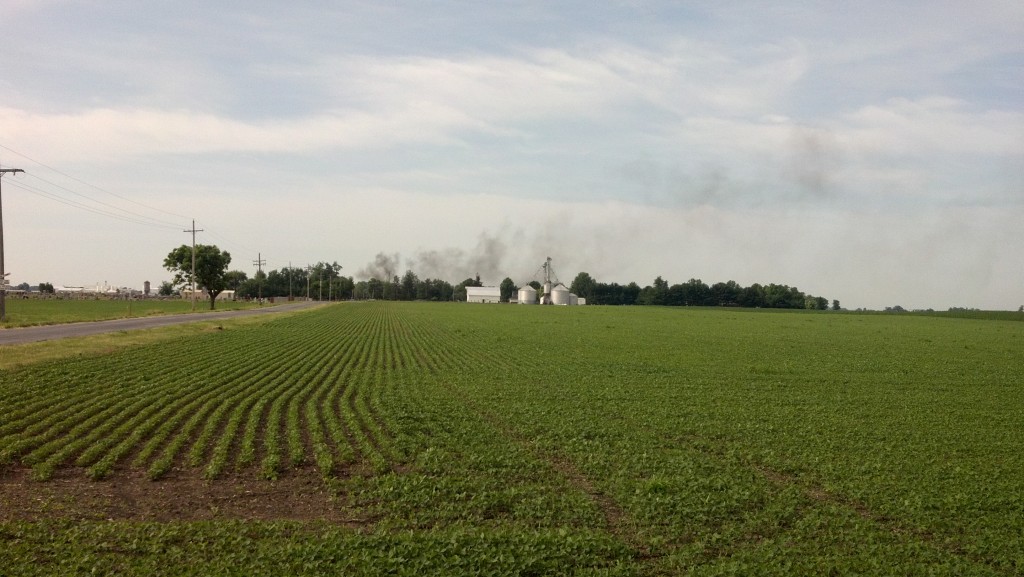 ominous smoke in the distance

As the sun started to drop, we walked out of the city limits of Elwood, Indiana, heading west toward Tipton. The houses were getting further apart, and we started knocking on doors to find a yard to camp in for the night. The first house looked friendly enough, and when I knocked I heard a dog bark and someone speak – but nobody came to the door. We shrugged and moved on.

We walked on, past empty houses with no lights on and no cars in the drive. Finally, we came to the end of a long cobblestone driveway, leading to a large brick house with a sprawling front yard. The flower beds were immaculate. A full-sized Recreational Vehicle sat parked in front of the house. A pair of carved stone lions flanked the end of the drive, staring at one another across the expanse of red cobblestone. I took off my hat and sunglasses, and started toward the door. Kait raised an eyebrow and asked, “Are you sure?”

The man who answered the door was older, and greeted me stiffly. I told him who I was, what we were doing, and that all we needed was a safe place to camp for the night. I pointed to a corner of trees near the road, and asked if we could pitch our tent there. Although he was excited when I told him about our walk and volunteer service, he immediately said that we couldn’t stay there, and gave me some explanation that didn’t make much sense. He went inside to ask his wife, and came back shortly saying, “She agrees with me, you shouldn’t stay here. But can I ask, are you “Born Again?”

Caught off-guard by the question, I went with my first response which was an honest “No.” The gentleman proceeded to give me a solid 15-minute lecture about how I was destined for the lake of fire, all while refusing to help me in the simplest of ways. I found myself unable to rudely cut him off so that I could leave, nor did I feel comfortable getting into a theological or moral debate with the man on his front porch. I didn’t think that would be very respectful, and considering that Kait and I had been walking all day, frankly I just wanted to sit down somewhere. I tried to find common ground with statements about the positive influences of all religions, and the fact that we were currently building our lives around the practice of serving our fellow man, but the answer was the same every time:

“I’m not being judgmental, I’m not throwing stones, I’m not trying to tell you what to do. But, if you don’t get Baptized and accept Jesus as your personal lord and savior, then one day you’ll face God, and he’ll look at his list-” (he made a motion in the air, pointing his way down down an imaginary ledger) “and he’ll say ‘I’m sorry, John, but I don’t see your name here. I have no choice but to send you to Hell.'” He told me of a place where creatures “many times stronger than us” would tear me apart for “eternity – that’s forever” and that he wasn’t talking about no “voodoo” when he told me to accept the Holy Spirit and allow Christ to enter me. At one point, his wife poked her head out the door and without so much as looking at me, pointedly told her husband that dinner was ready. In parting, he told us that there was an open field where a house had burned downed years ago. The owner no longer lived on the property, and he didn’t think it would be any trouble if we camped there. Hoping aloud that we would find the same salvation that he had found, he closed his door and left us to our task of finding a place to sleep.

As I walked away from his house without a place to stay, my mind reeled with all of the things wrong with what had just happened. He had refused to help a stranger in the simplest way possible, but had insisted on threatening me with damnation without knowing anything about me as a person. He talked of Christ’s love and example, while turning away a pilgrim. It was fine that he didn’t want to let us camp there – it was, after all, his hard-earned property – but it was truly insulting to be judged harshly by a man who seemed to disregard the very heart of the teachings that he preached about.

I was reminded of the Fellowship back in West Virginia, and how they followed the teachings of Christ as truthfully and closely as any group I have ever met – but they wouldn’t even call themselves Christians. Timothy told me that Jesus didn’t come to build churches and convert people – he came to set an example, and show us how to live a good life. In our time with them, they never once made us feel pressured or obligated to accept their faith. We were welcomed as brothers and sisters, and relished the opportunity to see faith working its magic. The Fellowship redefined my concept of what religion can be, and how we should be using the teachings of all religions to help one another. “Do Unto Others” is universal. Islam, a religion currently stigmatized by a handful of violent radicals, at its core emphasizes the importance of service to one’s community. Buddhism emphasizes the concept of karma, through which your good and bad deeds reflect upon you. Reincarnation, Heaven, Hell – these are all concepts that are meant to motivate us to live our lives well. But a lot of people seem to miss the message. 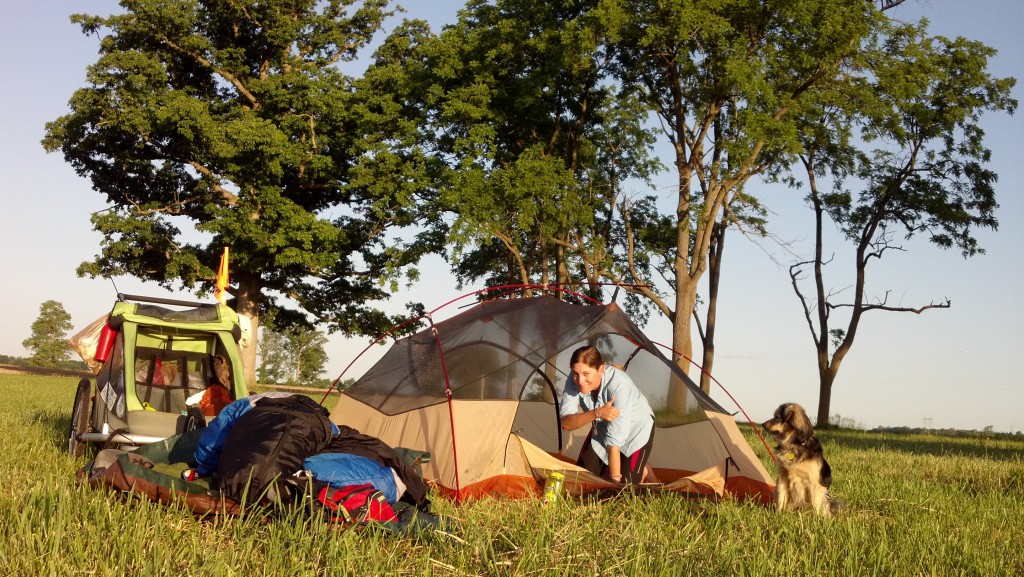 making camp before the sheriff showed up

We moved on, camping in the aforementioned empty field about 8 miles from Tipton. There was no property owner around to ask permission, but we were confident that we wouldn’t be in anyone’s way. As the sun went down and we settled into our sleeping bags, the Tipton Sheriff’s cruiser came rolling into the field, lights on. I got out of the tent, provided identification, and explained what we were up to. While one officer ran our ID’s, the other talked details with us. We knew that we did not have permission to be where we were, and explained that we were willing to pack up and start walking, but our odds of finding a place to stay after dark were very slim. Since we have no warrants or criminal records, the officers went out of their way to call the property owner and tell him that we weren’t causing any trouble. With that, he gave us permission to stay and the officers gave back our ID’s and wished us good luck. 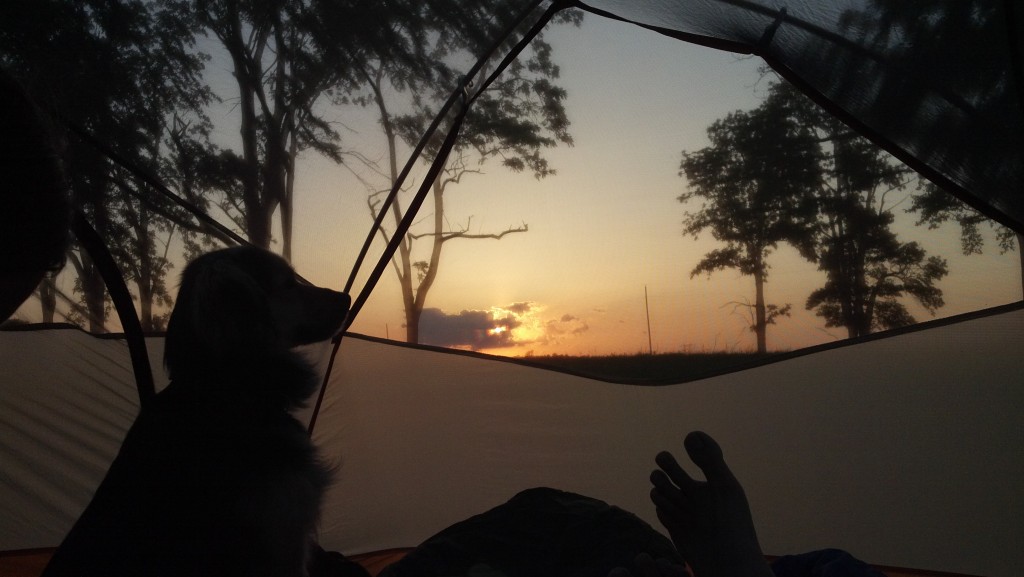 We slept well on the soft grass, and in the morning we walked the rest of the way to Tipton where we stopped at the grocery store, and then made our way North through the city to bypass the heavily traveled routes toward Lafayette. We stopped at a real local haunt, Faye’s Northside Cafe. The food was awesome, and when I went to pay the check our waitress, Theresa, decided that it should be a donation to our cause. She even gave us a couple slices of pie for the road, and advised us on our route.

A man named Bruce stopped to talk to us earlier in the day, and told us how he was able to sell his truck and live car-free by riding his bicycle everywhere. After we parted ways and finished our lunch, he tracked us down just to hand us a donation toward the walk. While we were talking, Theresa brought some of her family down the road to meet us as well. On a quiet corner on the gruff side of town, we had a little family get-together before we finally left Tipton. The community there really welcomed us, and cleared away the unpleasantries of the previous night. 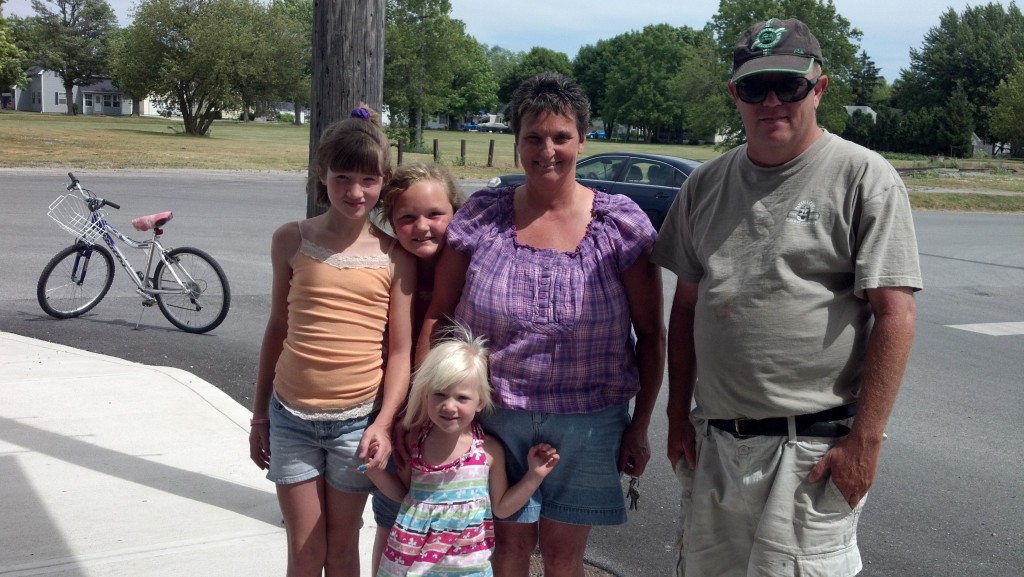 Bruce on the right, Theresa, and her three little angels

A few days on and further down the road, we met back up with Chris – the guy who invited us to his family’s cookout on Memorial Day. He brought us lunch on the road, and right as the skies started to open up with much-needed rain, we piled into his truck to eat and chat. We talked at great length about faith and religion, and the importance of actions over words. So many people get hung up on the minutia of their holy texts, and forget that the act of living is where the true value lies. “The Bible is a game of Telephone that’s been going on for over 2000 years,” said Chris. “Don’t tell me you’re a good christian – show me.” Talk is cheap. If there is a God that is going to judge us one day, I doubt he will care how many times we told others that we are good. We have been blessed to meet so many people on the road who are living with love in their hearts, and reach out to help one another. These people have rekindled my faith in faith. What matters most is how we live, and how we treat our fellow man – everything else is just talk.

This entry was posted in Trail Life and tagged across, america, do unto others, dog, elwood, faith, faye's, indiana, northside, practice, preach, the golden rule, tipton, walk. Bookmark the permalink.

14 Responses to practice what you preach