You’ve got a friend in Friend.

Good times in Nebrasky. As we passed through Crete, Kait got in touch with Gale Lothrop, one of the founders of Healing Heart Dogs. Gale and her husband, John, came out to meet us on our lunch break in Dorchester’s park, and they brought their Belgian Trevuren, Mysti, to meet us. 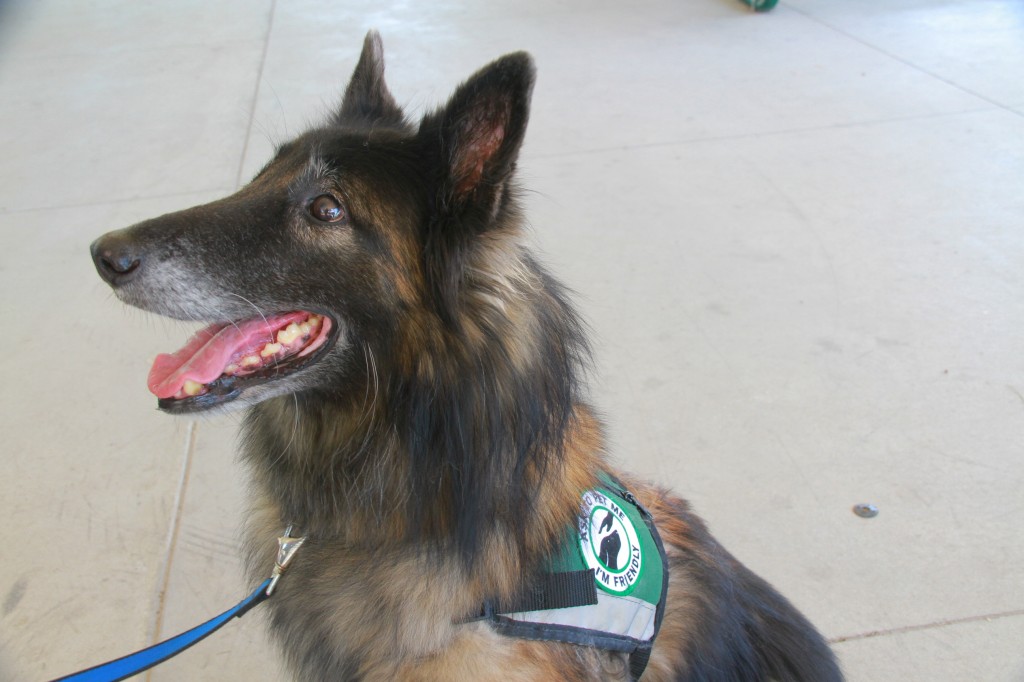 Since 2005, Healing Heart Dogs have been offering Crisis relief to those in need. Crisis Relief dogs take pet therapy to communities that have suffered collective shock from floods, tornadoes, violence, and other community disasters. Gale also travels the country, training other pet therapy groups in crisis relief. The comfort her team is able to bring those in need is inspiring. 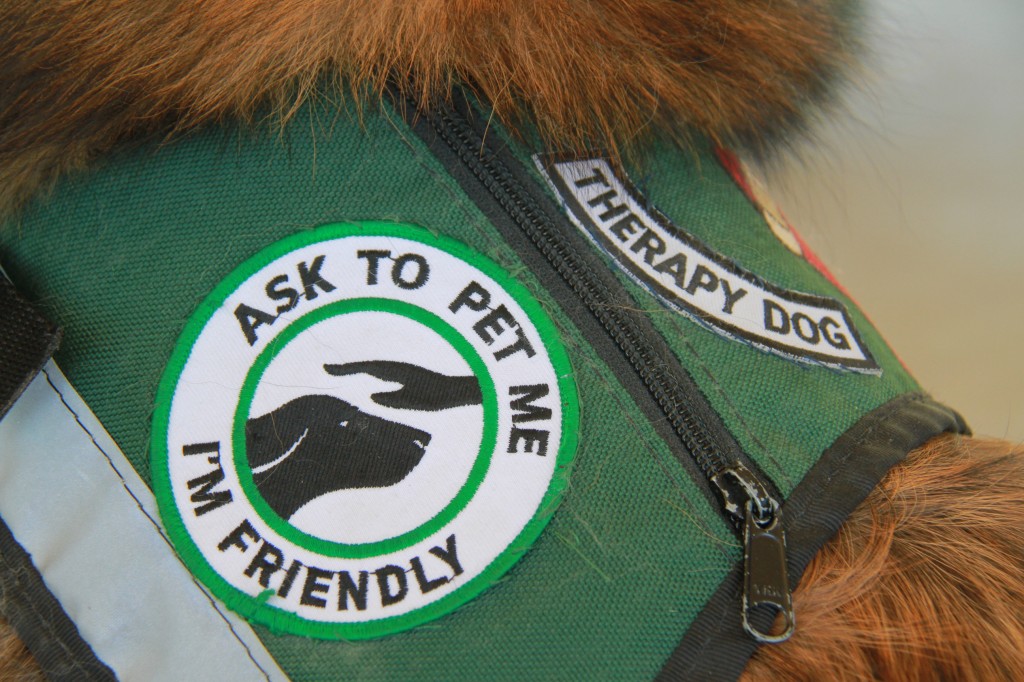 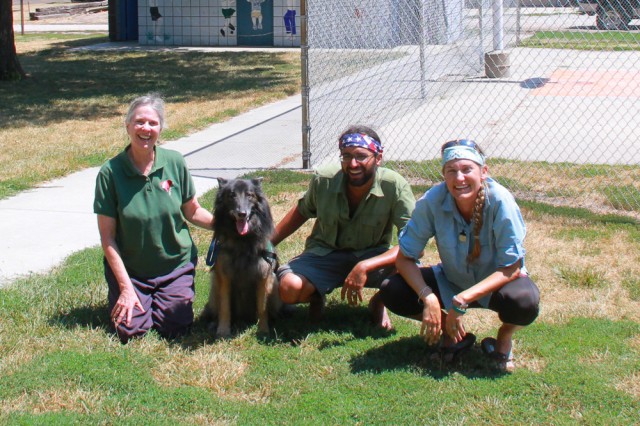 with Gale and Mysti

Moving past Crete, we picked up historic US Route 6. Route 6 runs coast-to-coast and has been walked by many before us. It is also a welcome change from the narrow gravel roads we have walked through much of Eastern Nebraska – the shoulder is wide AND paved! All the better for making some miles. We booked it to Friend, NE. Yes, Friend. 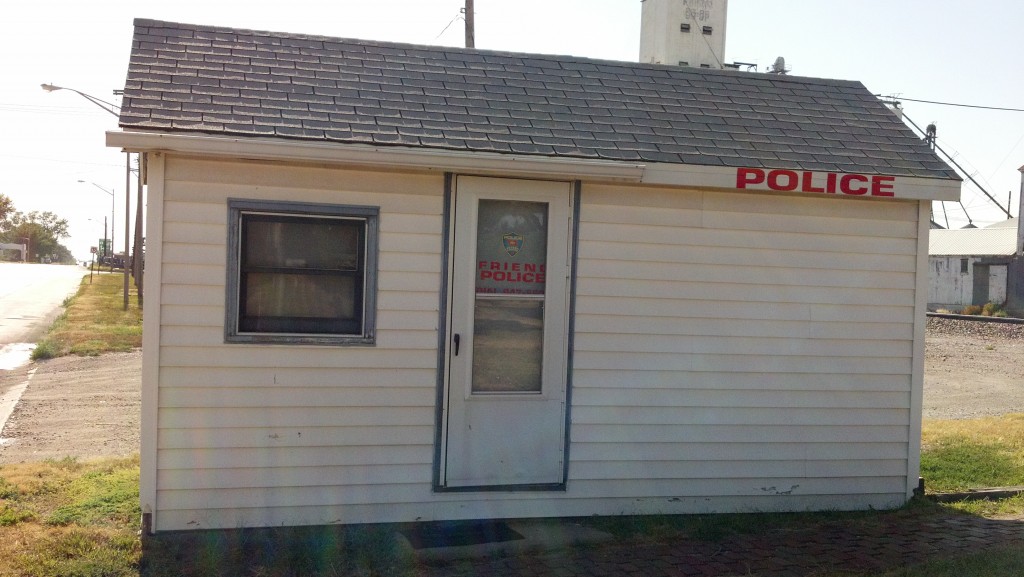 The city so nice they have a closet for a police station.

Craving sustenance, we went to Sidewaze bar and grill for some much-needed caloric intake. We ate food. People were nice – especially the owner, Natalie. She was telling us about her two daughters that moved away from Nebraska, and Jon leaned in to ask, “Are your daughters as beautiful as you are?” Natalie made the most amazing face as she asked, “Did you really just say that?” “…Yes.” Natalie shook her head, speechless. Kait said I can’t put that story in the blog, but I disagree. Because it was hysterical. 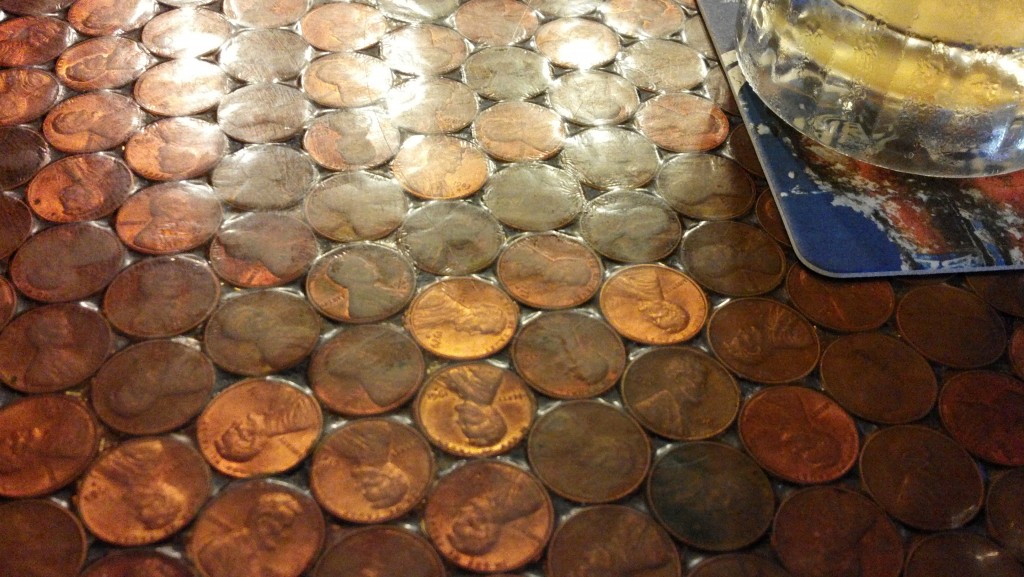 collest bartop ever. remind me to steal this idea.

We had already called the tiny sheriff’s office and gotten permission to camp in the city park, but a kind man at the bar named Darrell offered us his backyard (and bathroom.) His two kids, Dakota and Marley, were super hosts and made us feel right at home. We slept through some much-needed rain, and were back on the road the next morning. We found ourselves in Grafton. 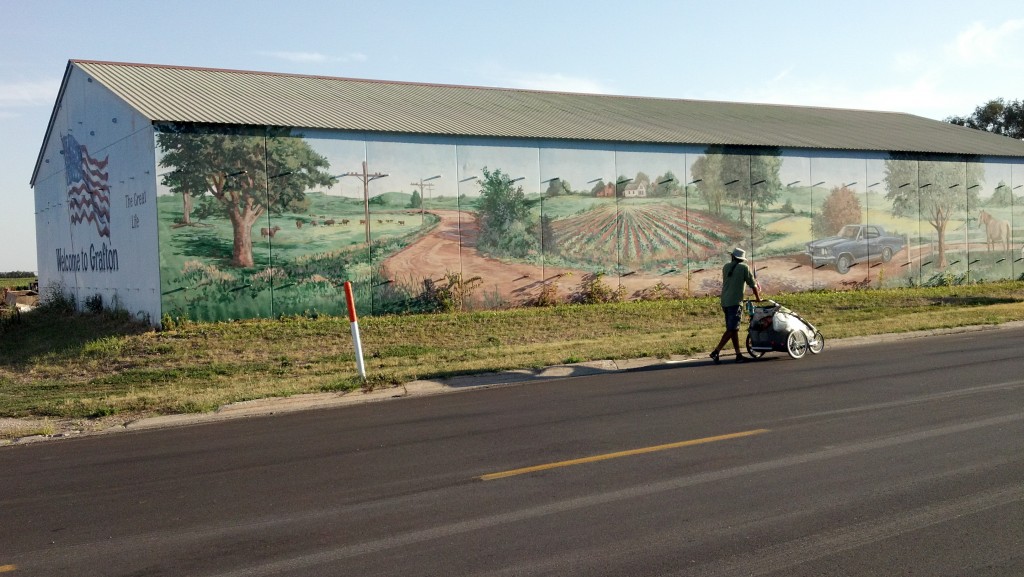 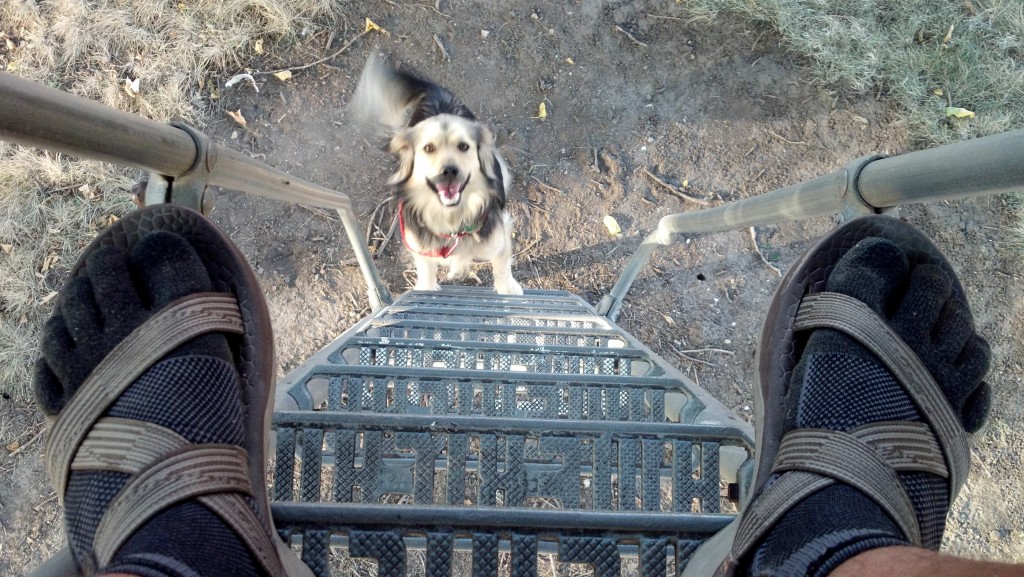 we camped in a park. we do that a lot. 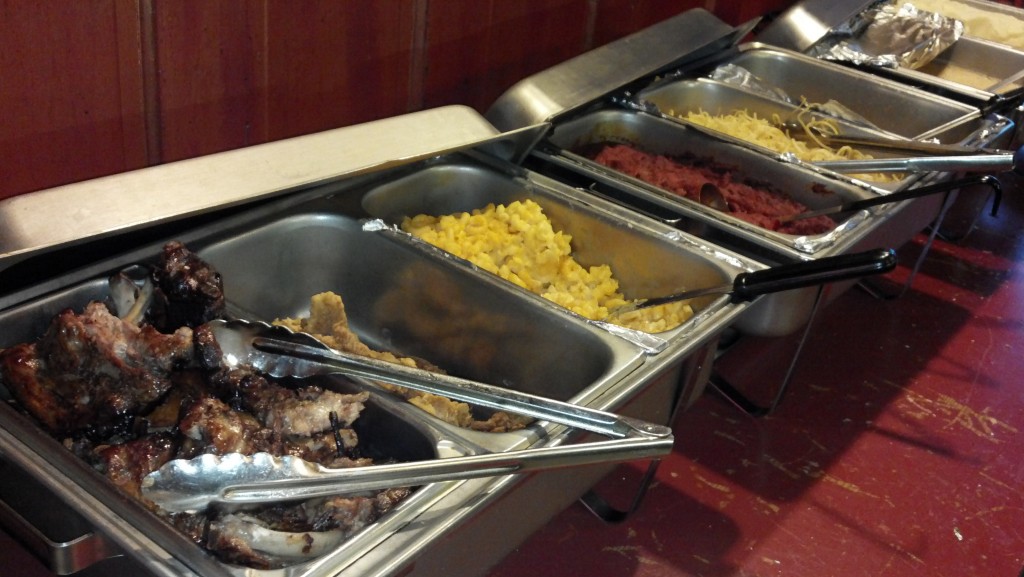 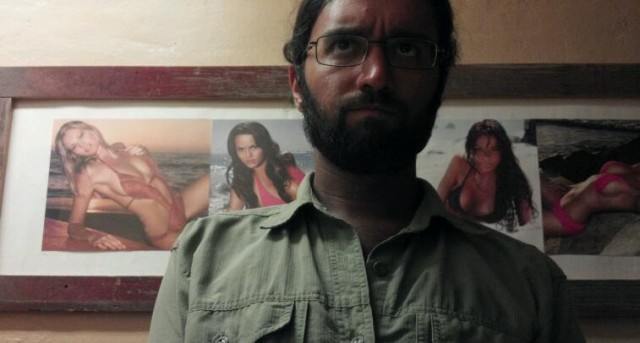 I didn't come to the bathroom for a show - I just needed to take a sink shower.

Still walking West. we stopped a bit short of our daily “plans” and rested in the park in Sutton. Although we lamented taking a half day and wondered if we were being wusses, the reason for our short day came clear when we made camp for the night. Right at sunset, a big van came pulling in and a kind man named Steve hopped out, looking like he had just driven for 12 hours (he had.) Steve was on his way back to Utah, and had the air of a well-seasoned Seeker. His hobbies fascinated us – specifically how he likes to harness his two Malamutes to his scooter and rage all across the land. 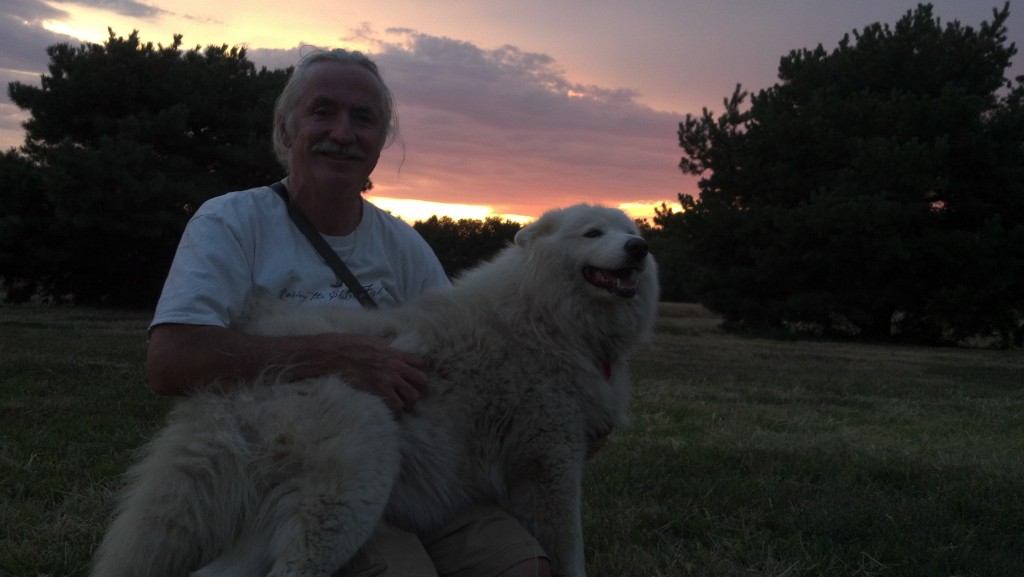 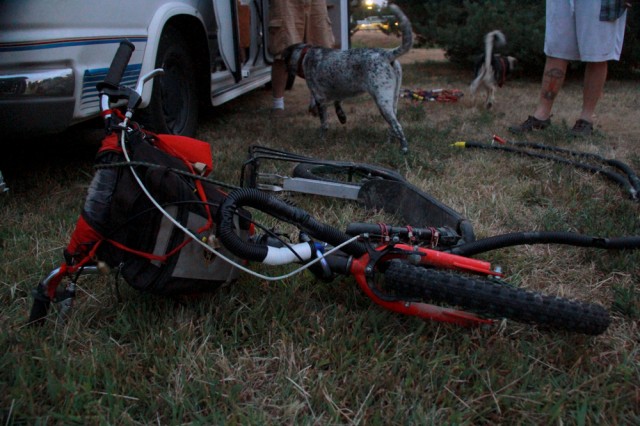 the one-of-a-kind dog-powered scooter. it takes a brave soul to ride this beast.

We spent some time sharing stories of travel and nature with Steve. At his request, Kait retraced the path that we have walked on his well-worn road atlas, while he told us of homemade apple wine and Hopi prophecies. Someday, the Earth will shake and a new age will begin. Theoretically speaking, of course. Hopefully, our paths will cross again someday. 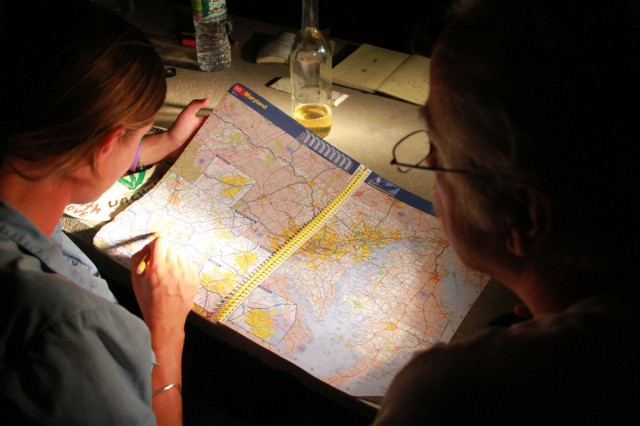 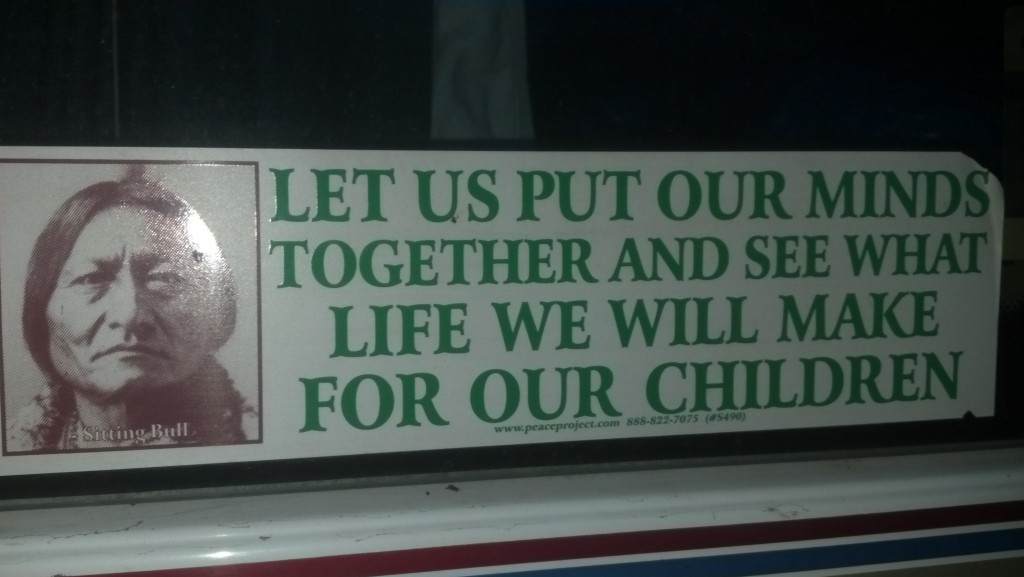 We moved on toward Hastings. The towns in between the places are getting smaller and smaller, and the distance is growing longer. Even when we find a town, the odds of a restaurant that isn’t closed are falling. 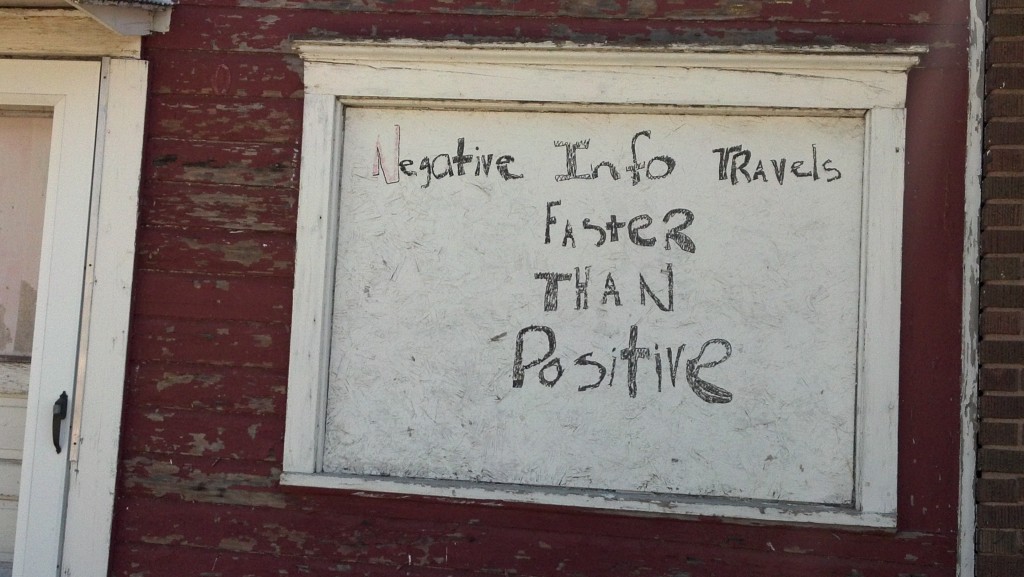 we go 4 miles per hour. does that make us positive?

Only a handful of miles outside of Hastings, we got an amazing surprise. James and Kyra – the couple we met in Lincoln – came to hunt us down on the road. They brought us pink lemonade, food donated by Rico at the CEDARS home for children, and their foster son, Jayden. James walked the last few miles with us, soaking up the experience of walking until you smell really bad. He aspires to walk across the States in the future, and we hope he can pull some inspiration from his time on the road with us. 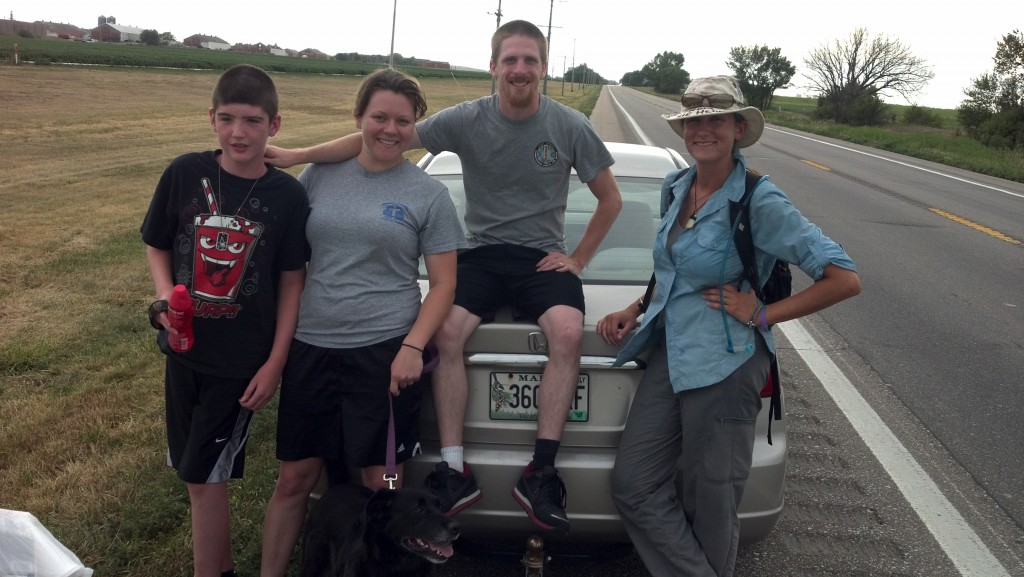 Hastings was a little less than pleasant. We had no luck finding a single pet-friendly hotel – in fact, Kait got laughed at and sassed over the phone when she explained that our dogs are therapy-certified and insured. “I’m sorry for laughing at you, but everybody says that.” So rude. 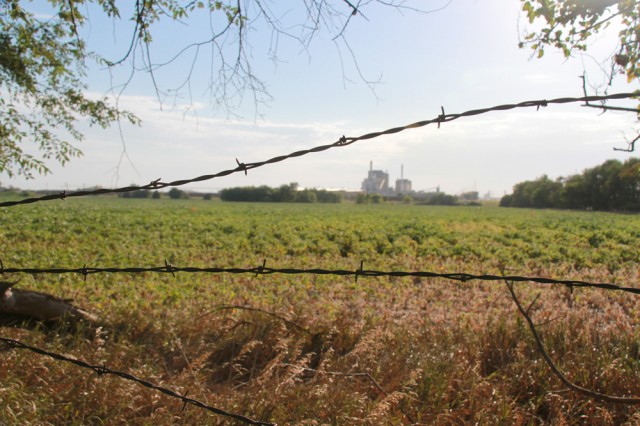 We ended up hosted for a discount at the Hastings Campground, and went to a Chinese buffet for dinner. The only other table was occupied by a young girl and her mother (or older sister, hard to tell) and a baby in the high chair. As we chowed down on General Tso’s, we listened to the saga of this girl. Her friend had called her, telling her the cops were looking for her. Apparently, this teenage CHILD had attacked another girl in a bathroom earlier that day, and someone videotaped the assault.

“OmmygodOhmygod youcan’tlumpingputhatonfacebook!!!!!11! Ok ok you didn’t see me all day, I was at the waterpark with my aunt.”

…was the gist of the conversation. She spent our entire meal calling every witness she could think of to get her cover story straight. People is weird.

Before we left Hastings, we were invited to the Mary Lanning Memorial Hospital to visit with their staff and patients. Now that all four of the dogs are certified and insured (Jenny’s in training) we can go into facilities with confidence. The staff was overjoyed to meet the dogs – we could feel their workplace tension lift as they rolled around and scratched the bellies. 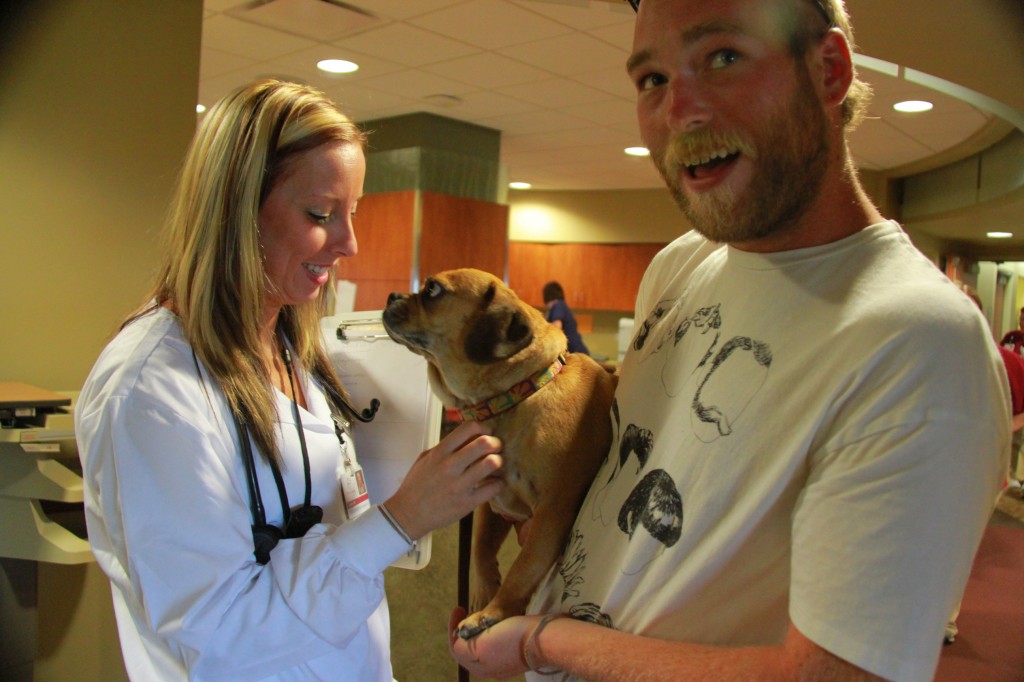 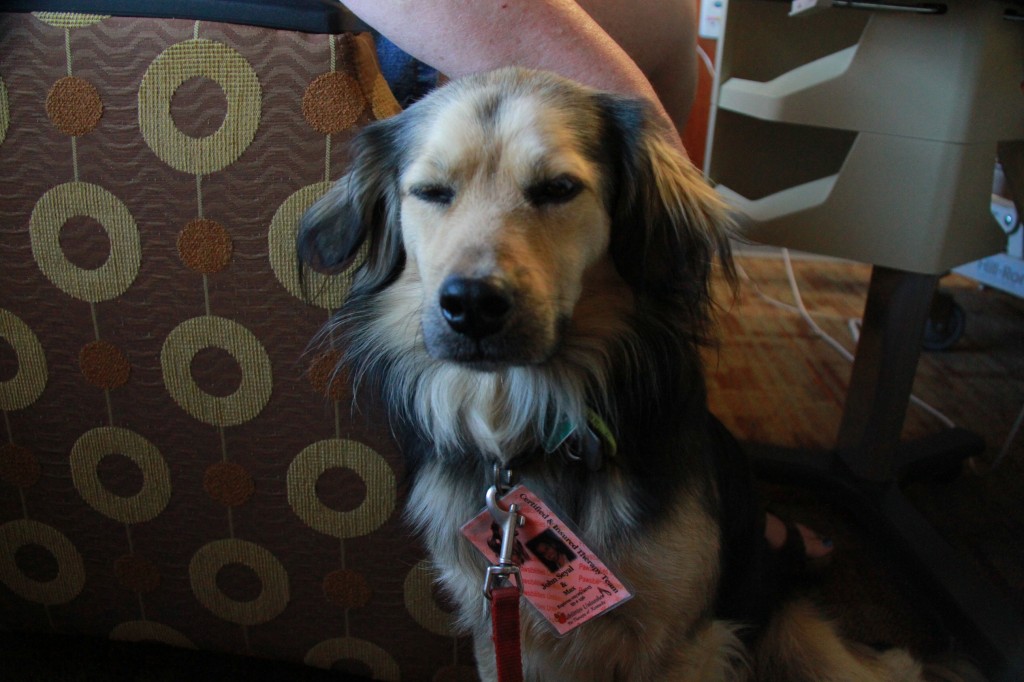 We moved on, bringing some light to the bed-bound patients. There was a five-year old boy who we were told would love a visit, and his family welcomed us into his room. He had to have each dog on his bed in turn before he could pick a favorite. In other rooms, we told Jenny’s story while the more seasoned four-legged therapists worked hard, rolling around on beds and making people smile. 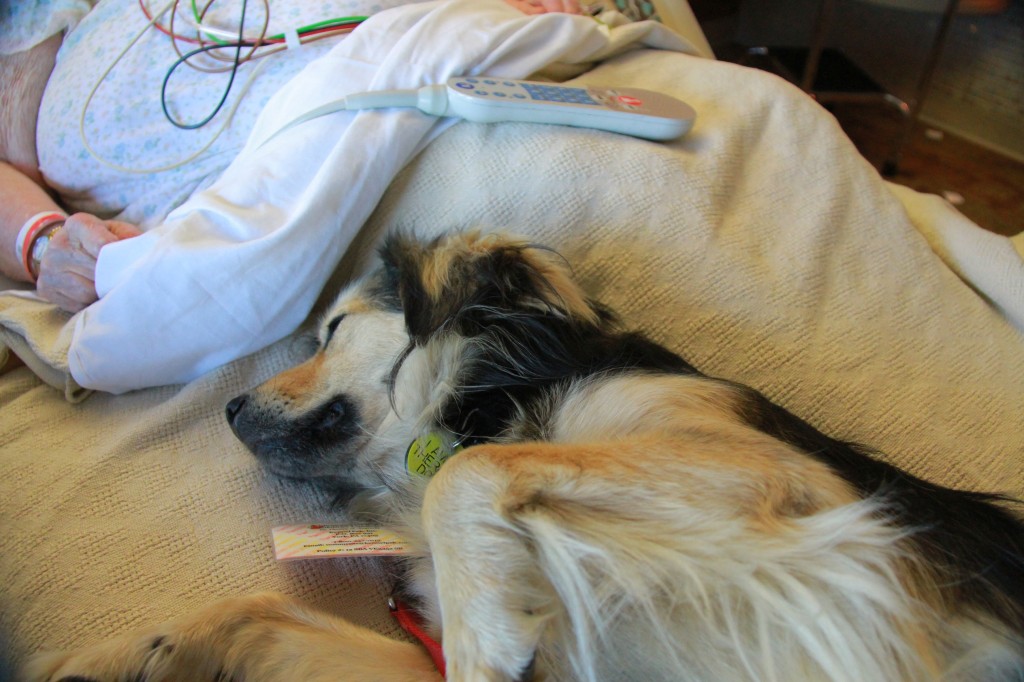 We often have trouble getting into hospitals on short notice, and it was a real privilege to be welcomed into Mary Lanning. With any luck, we helped brighten some days before we moved on. 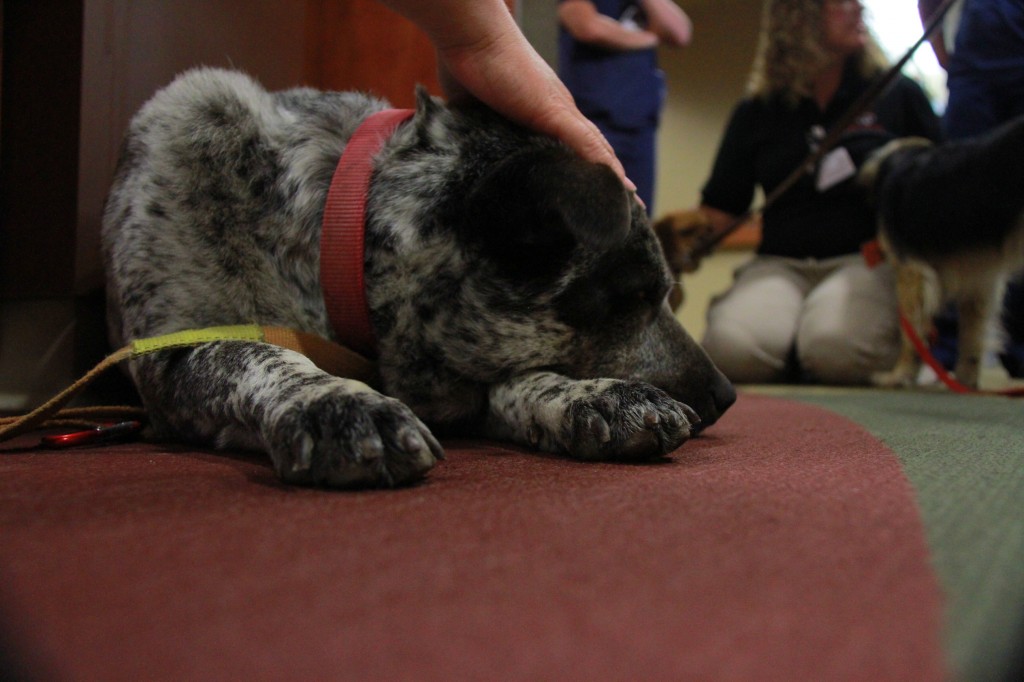 5 Responses to You’ve got a friend in Friend.