Three months have passed since we stepped into the Pacific Ocean. We have been settling back into the domestic way of life, trying to wrap our heads around organizing our house (“what is all this stuff?”) and building a daily routine that isn’t maddening. Things have been weird. Now that I have gotten my bearings and can form coherent sentences again, we’ll pick the story up after we left San Francisco, and started to drive our way back East. 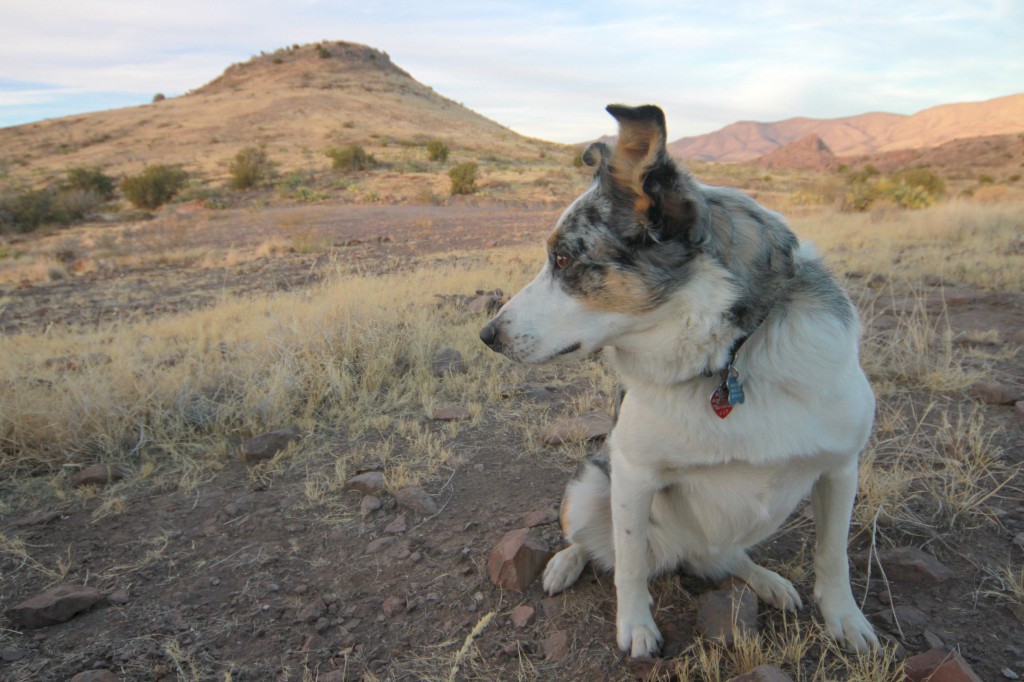 We took our time driving back across the Great American Bulge. Unnerved by the isolation and intense speed of the Interstates, we abandoned those straightest lines for roads less traveled across the deserts of Arizona and New Mexico. Whenever possible, we sought quieter, rougher roads with faded lines and sweeping vista. We stayed with Kait’s aunt and uncle Lynn and Alvaro outside of Tucson. Their house sits up on a hill or mountain of some kind, overlooking the valley. We watched the sun set and the city glow and just out of sight on the horizon was Mexico.

Our stop was brief and refreshing, and we were on the road again. Outside of Safford, Arizona, we pulled onto a rough dirt road to find a place to camp for our last night under the desert stars. We had planned it out ahead of time and picked up groceries and drinks for the occasion; after all, we had grown quite attached to the desert’s awe-inspiring openness, and this would be our last time sleeping under its unabashedly clear night sky. 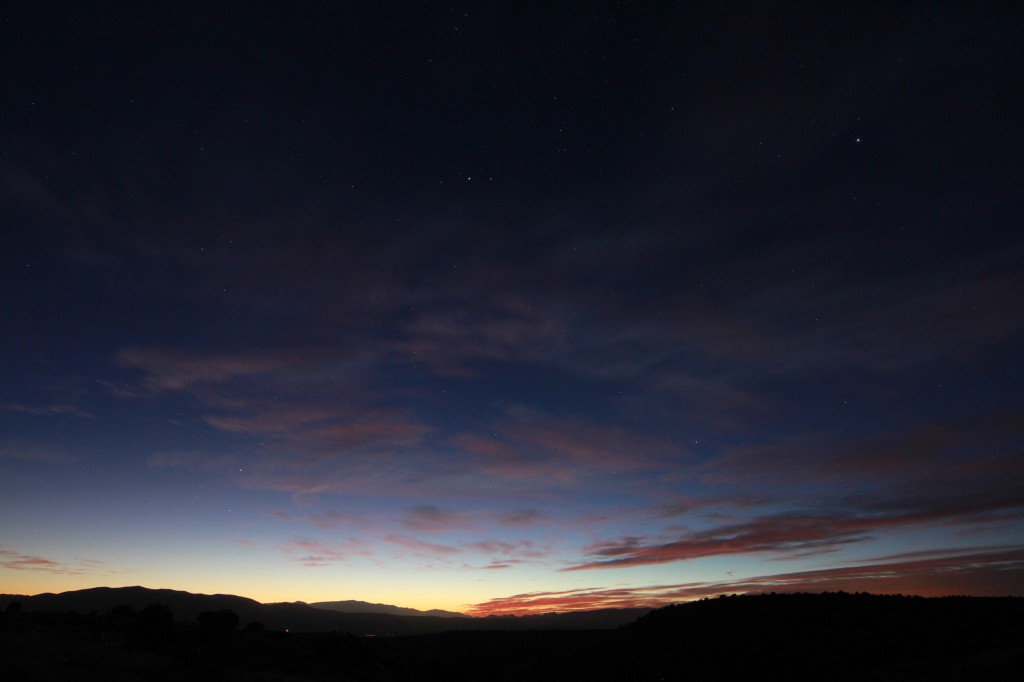 We found an unmarked ranch road and followed it back about a quarter of a mile until we came to a flat elevated clearing, where we pitched our tent and cooked our dinner over the fire while the stars whirled infinite above our heads. 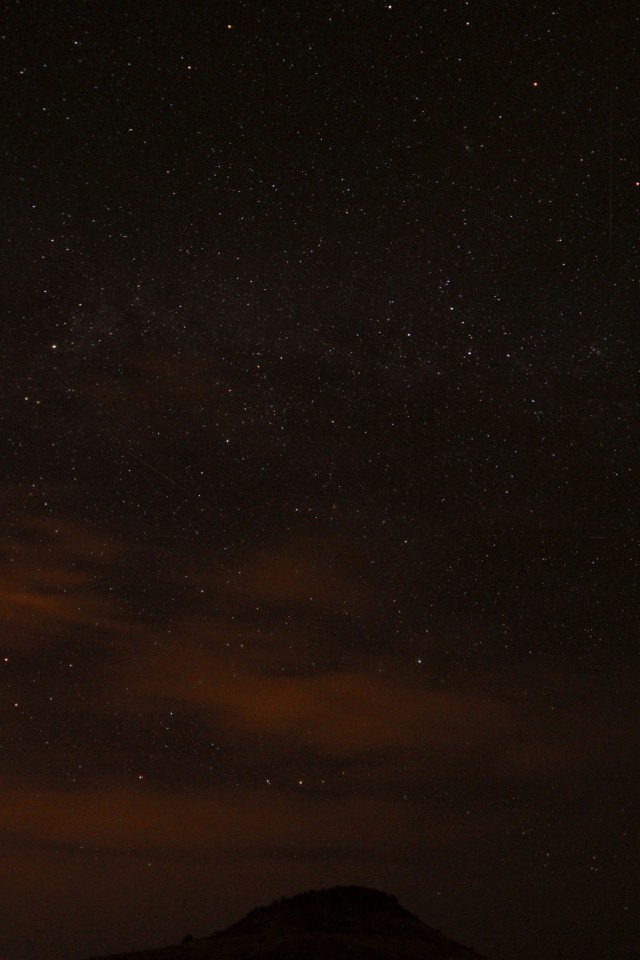 The next morning, the car wouldn’t start – dead battery. We sat and scratched our heads and thought. We could walk back out to the small highway we had turned off of, and try to flag down a brave-looking driver to follow us back up the ragged dirt road and give us a jump; or we could keep walking down the dirt road and see what we found at the end. We looked at the map and decided to walk the mile or so further back to see if there was a house or ranch at the end of the drive.

It is hard to say what you might find at the end of an unmarked dirt road in the middle of the desert. On that day, we were lucky enough to find Cold Creek Ranch and the Schwennesen family. I knocked on the front door and Jean answered, and immediately offered to help when I explained our situation. She didn’t even bat an eyelash at the fact that we had camped on their property, and they were happy to give us a lift back to the car and give us a jump. It’s good to know our trail magic didn’t end at the ocean.

Back on the road, we backtracked to Safford to buy a new car battery. Better safe than sorry, as they say. And onward we drove to Albuquerque, to see our best friend Scott. He’s just the best. We spent a brief night with him and his wife, Tracy, catching up and cackling on about all sorts of ridiculous and paranoid delusions. Scott and I just get each other. In the morning we headed off for Santa Fe to stay with Kait’s cousin Alison. Scott promised to head up for a day or two, and we planned to hang out for several nights. Alison and Molly live up on a hill, and their yard backs up to a sprawling dog park that overlooks the city.

Santa Fe was a blur. We planned to see the city, but our first day in town it snowed all day. In the desert. The flakes came down heavy and clung to adobe walls and cactus thorns. 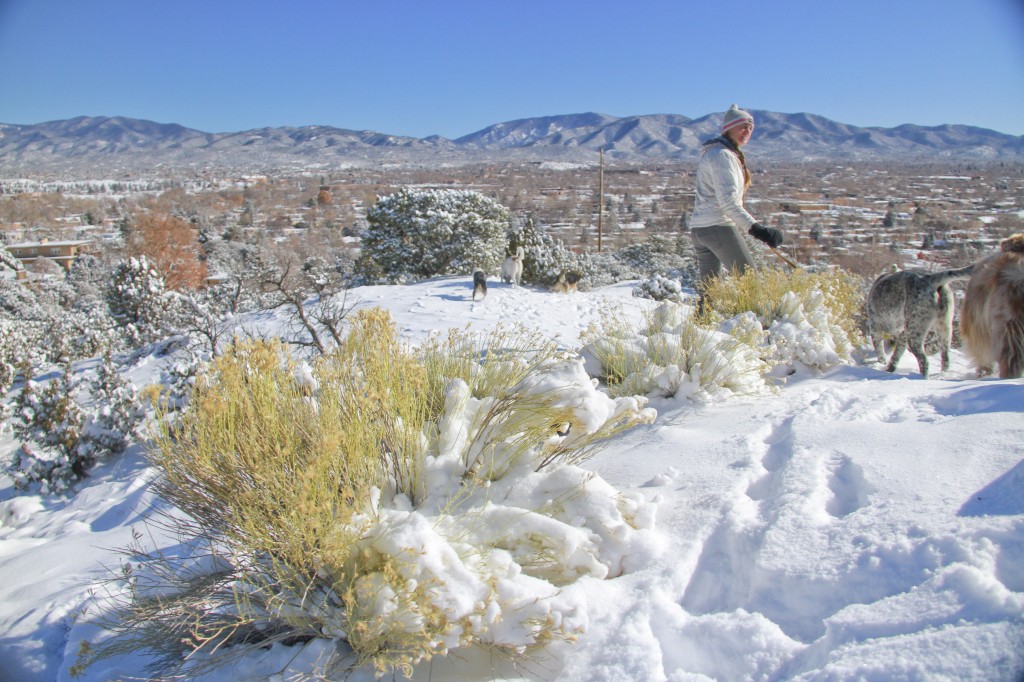 The snow melted off and Ali drove us out to hike Tsankawi Mesa, an annex of Bandalier National Monument. The short loop trail followed ancient paths worn deep into the soft rocks, past ruins littered with pottery fragments and caves with ancient paint chipping from the walls. 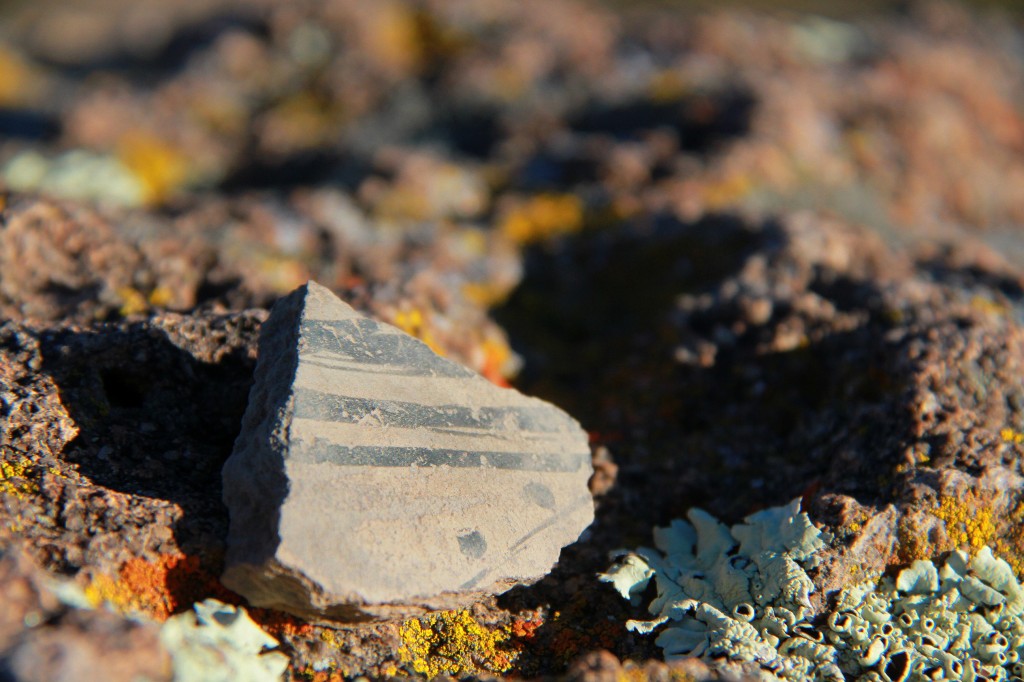 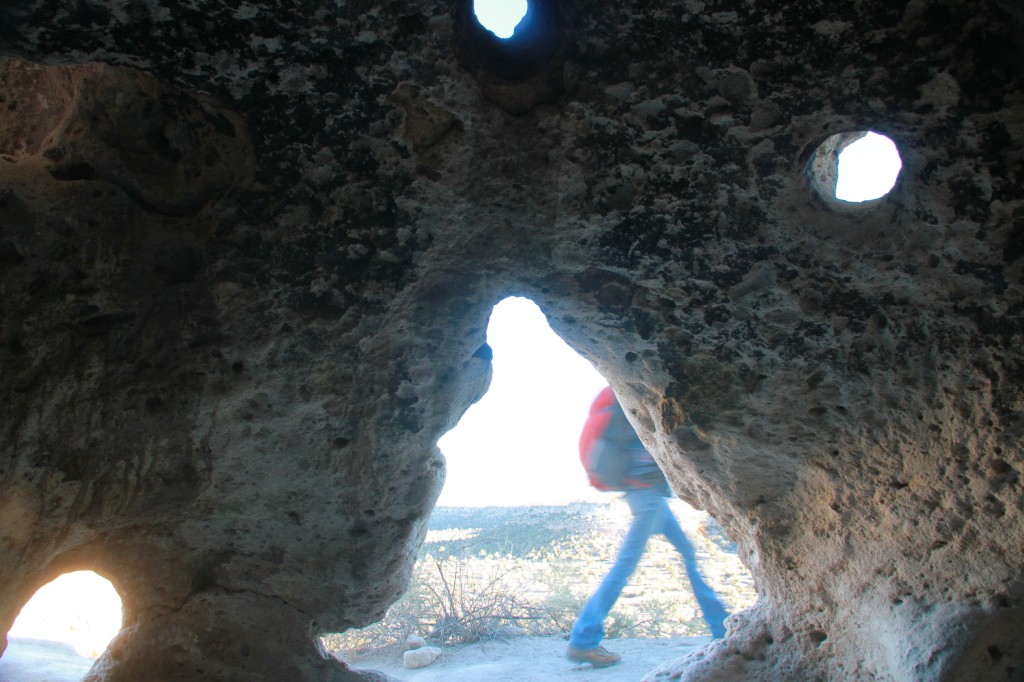 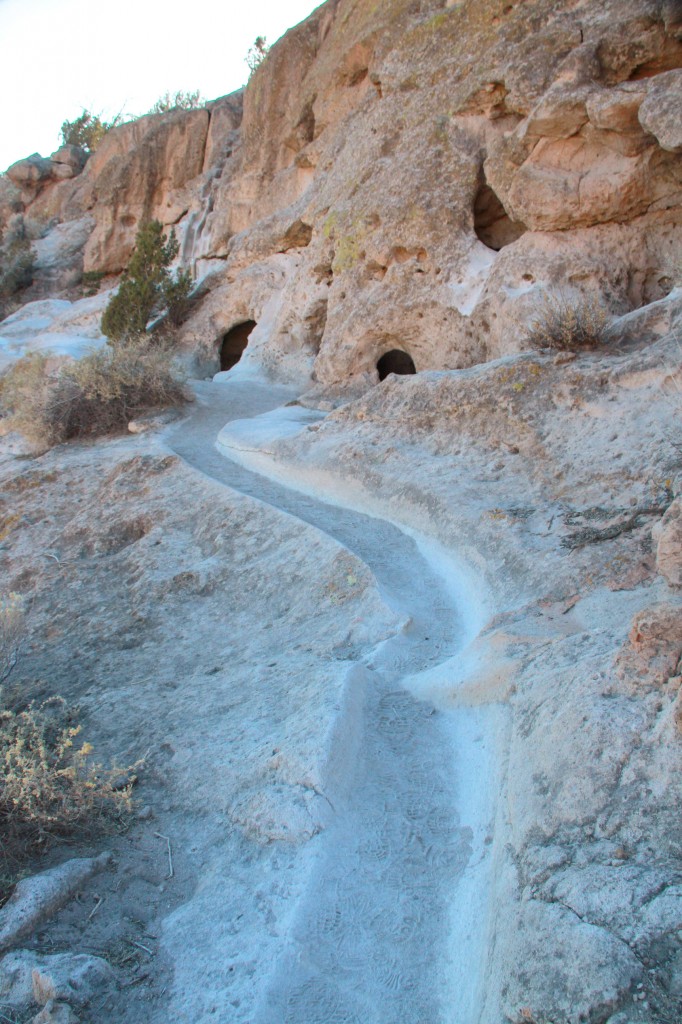 After our little field trip back in time, we cut hard north through Kansas, heading towards Kait’s brother up in Milwaukee. We stayed a night in Dodge City because, well, it’s Dodge City, and the next day found ourselves retracing some of our steps in southern Nebraska. A certain stretch of U.S. Route 6 – between Minden and Holdrege – stuck out as a particularly amazing day of walking. We drove it in about 20 minutes. Unreal.

Once again, we stayed the night with the O’Brient family in Villisca, Iowa. Staying with Jesse and Krystal again was a milestone in our re-entry, because knowing that they were real, living in their house just like we remembered, with their charming boys and deer skulls in the garage – it made the whole Walk real again. Staying with a host family from the Walk reminded us that it wasn’t just a dream – we were here. We knew that place, and those people, and they are still real and wonderful. That night, lying on the couch in their living room, I quietly wept in the comfort of their home.

And we made one final push north, through Chicago toward Milwaukee. We caught Tyler for lunch, and confirmed that we are indeed a rare breed of lunatic to have done what we did. Tyler even made bumper stickers that he only gives to other people who have walked coast-to-coast. He’s a fun guy. And we belong to a very strange and exclusive club of transcontinental pilgrims, and dedicated seekers of all things unsought.

Milwaukee was our last stop before heading back to Kentucky to unpack and breathe through the panic of “settling down”. Patrick, Kait’s younger brother, took us out on the town and laughed at our oddities. We are like wild beasts, trying to learn how to live inside and use toilets again. One day at a time, as they say. One day at a time.

We said our goodbyes and dropped south and east toward my old Kentucky stomping grounds. Just before we made it home, we stopped to find a fellow Walker out on the roads of Indiana. Jonah is fresh out of high school and taking time off before college to walk across America. He is chronicling his coast-to-coast adventure at Dudetrek.com. His plan was to walk on into the winter for as long as he could, and hunker down if he got to the Rockies before the spring thaw. That is one ballsy plan, man. 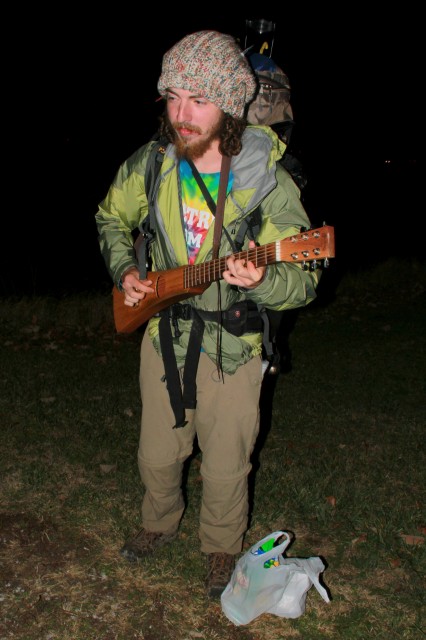 We took him out to dinner and talked his ear off, before dumping him on the side of the road, in the dark. We had a moment of realization when we found ourselves worried about his safety. Suddenly, we understood all of the hosts and people we met on the road that worried for us, and didn’t want us to leave, and went out of their way to check up on us. Coming from the walk, we knew exactly the kind of dangers Jonah is facing – and I don’t know if we worried more or less because of it.

So if you see Jonah (I think he’s in Missouri as of this posting,) buy him a big hot meal if you can. And ask him to play you a song. And tell him we sent you.

3 Responses to the way home