My first taste of The Walk

On Sunday, Kait and I embarked on a training walk that we have had planned for months. Leaving from our house in the Highlands of Louisville, we walked 10.75 miles to my parents’ house out in the suburbs. The walk represents a solid half of the mileage we want to cover every day next year, covering a variety of terrain – from the heart of the city, along potentially hazardous (but BEAUTIFUL) River Road, and out into the commuter-friendly suburbs. It was also my first real training walk. 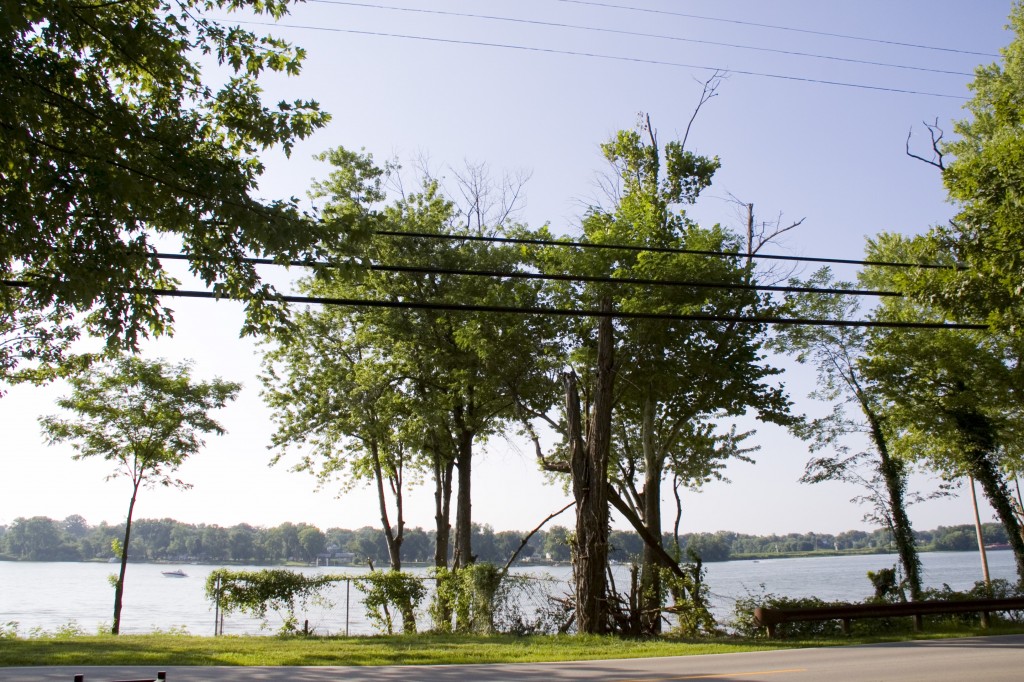 I’m always amazed at the response we get from friends when we talk about walking. For this particular outing, we had two friends who practically demanded to walk with us (lucky for them we love the company.) Javier and Jen rounded our group out nicely. I have been told that as Kait and I walk across America, we should be prepared for a lot of walking in silence. This may be the case, but it’s still great to have a group talking and bantering as we trek. 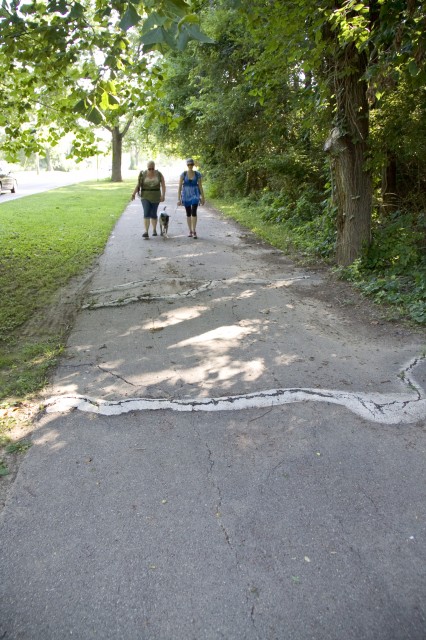 Kait, Grace, and Jen meet the clever speed-bump roots on the bike path

I should write about what learned, or the logistics of walking. Obviously, water is priority #1 – for our safety, and the dogs’. We carried plenty – I didn’t use everything that I brought, but I am sure that I could have. I hydrated regularly, and any time we paused we offered water to the dogs. It is funny to see them panting so much! At first, I was concerned – it is a stark contrast to their usual, non-panting selves. But I remember that dogs don’t sweat – that heavy breathing is their only temperature control. Once I got used to seeing Max and Grace breathing hard, and I was sure that they had enough opportunity for water and rest, I stopped worrying as much. We are all training and working to be stronger, and a little sweating (or panting) is a sign that we are doing just that – working. 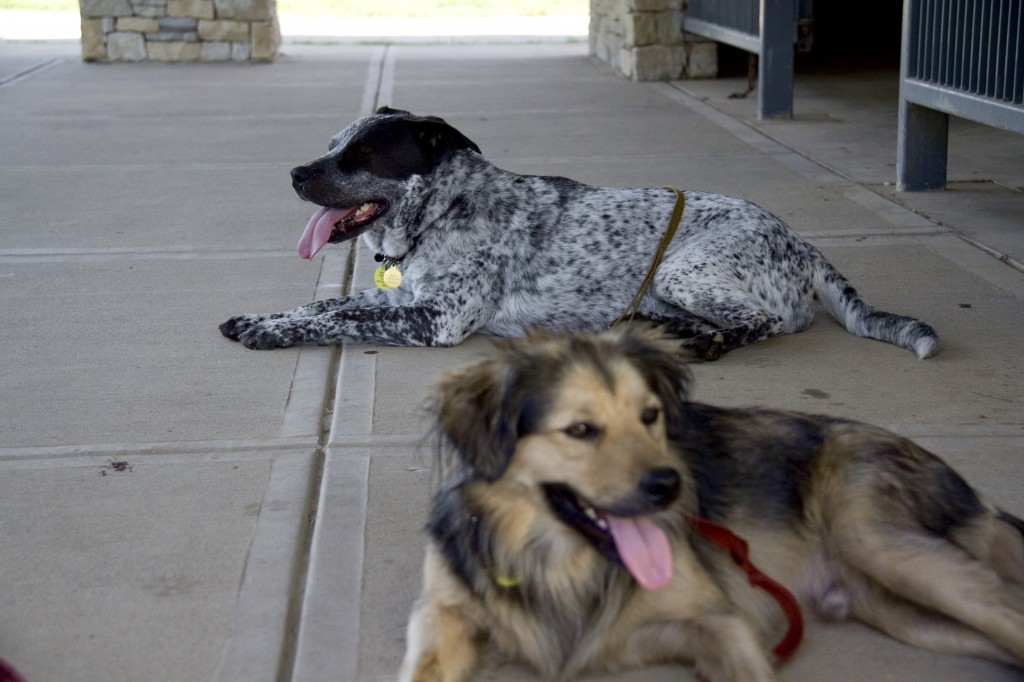 There were long stretches of our walk that gave us no option but to walk on the non-existent shoulder of the road. River Road follows the river all the way from downtown Louisville to the Eastern outskirts of the Louisville Metro area. It has a decent amount of traffic, and very little shoulder. There were bike paths for some sections, and we strolled through two lovely parks along the river. But beyond that, we walked on the road for miles. It was nerve-wracking, but it was also surprisingly manageable. Nobody honked or tried to squeeze past us – we were treated courteously by drivers, despite being a bit of an inconvenience to them. The biggest problem I had was having my dog walk through poison ivy on the side of the road – I was keeping myself between the traffic and him, and that patch of ivy was the only place he could go. He didn’t mind, but I am pretty allergic to the stuff and had to treat him like a contagious disease until I got him washed off. 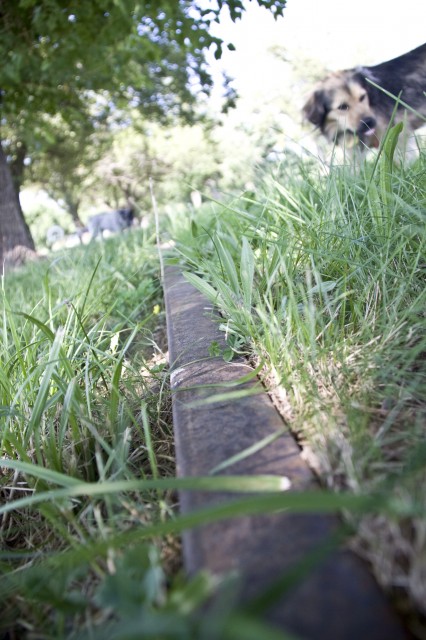 Taking a break on some long-lost train tracks

I love traveling by foot, because it really immerses me in the places I am walking through. I am not just on my way somewhere with the blinders on, rushing to get from one place to the next. Even with miles to cover, we found the time to explore quiet little details of the city. We walked through a quiet neighborhood, and happened past a film crew setting up a camera rig to shoot inside a moving car. On our way to River Road, I walked past a security camera pointing straight up to the heavens – watching for UFO’s, no doubt (blissfully ignorant of all of the graffiti writers tagging the walls beneath it.) 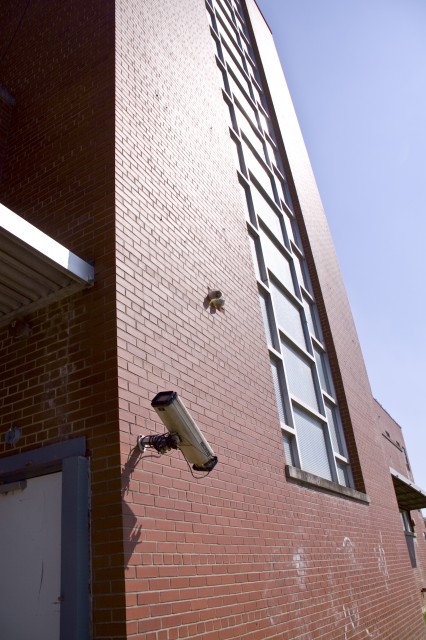 Keeping an eye on the sky (Mellwood Arts Center)

The real treat was when we walked past 4515 River Road. There are many little houses and structures built out over the river, and I have eyed them all in the many years I spent driving to and from school along this route. Being in a car, I always just drove past – no time to double back and find parking. But on foot, it was as easy as saying, “That looks interesting. I’m crossing the road and checking it out.” And we did. 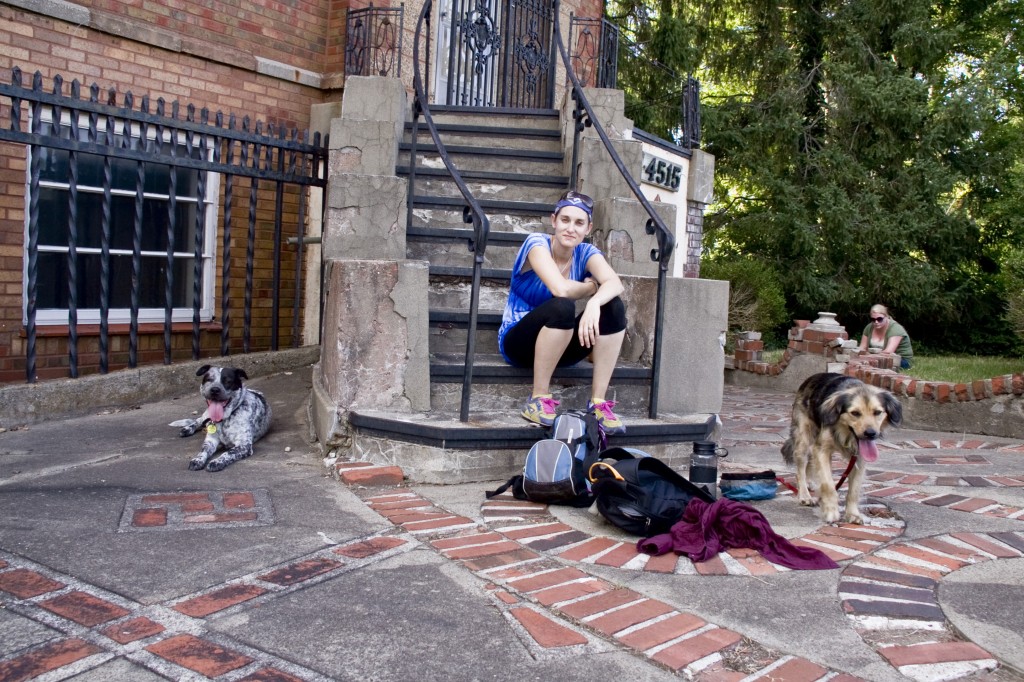 Jay and I wandered a little ways around the house, exploring the overgrown garden just out of sight from the road. The property showed many signs of being abandoned and unkempt – rusting, rotting, overgrown with ivy – but we could tell that when it was occupied and looked after, it would have been a sight to see.

(I have a picture of the ivy garden, I will have to add it later.)

Below the house, we found an overgrown terrace overlooking the river. Planters, probably once full of beautiful ornamental flowers, now full of rain water. There is something so entrancing about decaying and abandoned human spaces. Someone took the time to plan it, build it, decorate it, and live in it – where have they gone? Why did they leave this house to be reclaimed by the persistent march of nature? They are monuments, standing ghosts of time passed and lives lived. 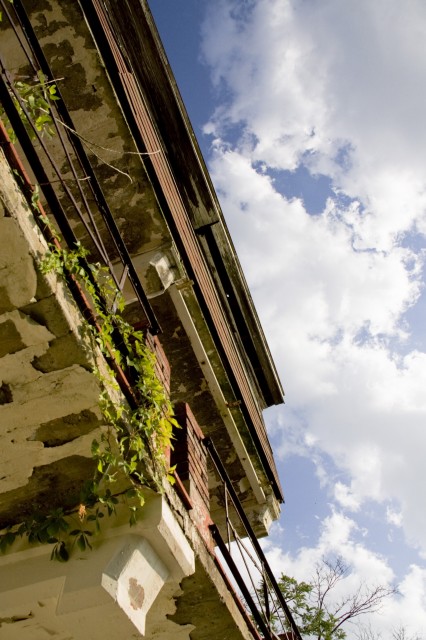 I hit a wall around mile 7. I felt fatigued, like I hit a plateau. As with any exercise, such a plateau is a choice – stop now, or push to the next level. It was not very difficult to continue pushing, and soon mile 7 became mile 9 – and that’s practically 10, so the mental weight lifted and we pushed through to the end. We walked past austere properties, well-kept farms with ornate fountains and cobblestone driveways. We crossed US 42 with no problems – something I have never even dreamed of doing, as it is a road I have considered dangerous since a young age. As we got further into the suburbs, I noticed a trend of people – mostly the ones with their car windows up, cut off from their surroundings – mouthing “What the #@!& are they CRAZY?”  I suppose they don’t often see gangs with dogs just walking around.  The ‘burbs were made for commuting.

When we finally arrived at my parents’ house, we were greeted with ice water and a delicious dinner of grilled chicken and salad. I have never eaten so much (that’s probably an exaggeration, but it sure felt that way.)  Thanks, Mom!  I now have the strange sensation that my mental map of the city of my birth shrinking, as I realize that it is not so far from Here to There. 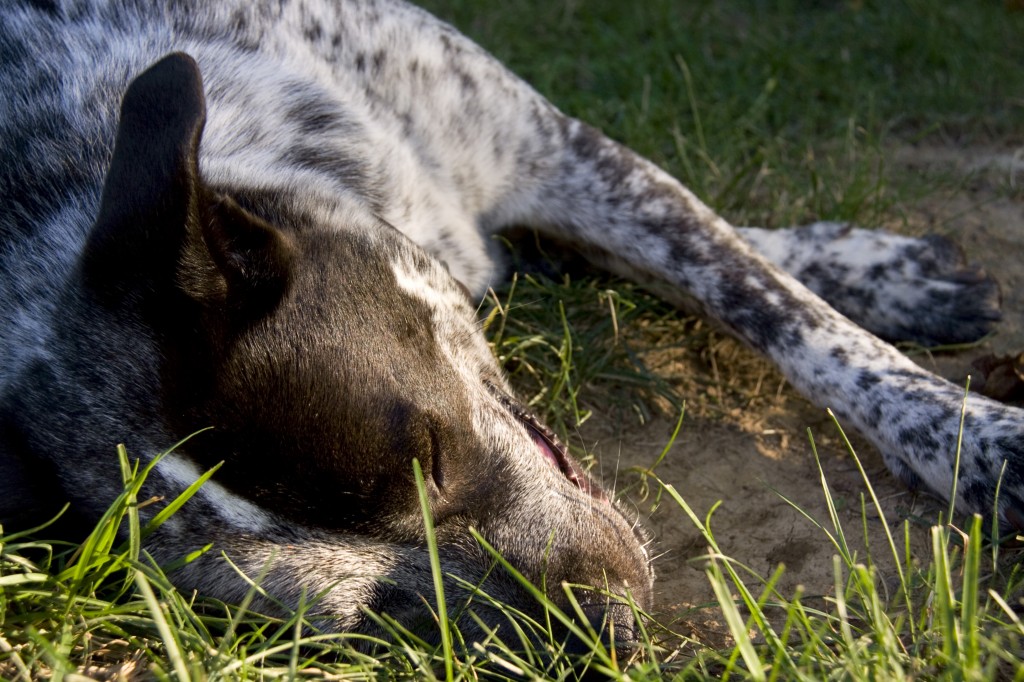 And always, I dream of West – now much closer than I thought.

One Response to My first taste of The Walk