Congratulations are in order for Leigh and her dog Frost and Stephanie and her dog Mara, our new friends and founders of Dames and Dogs.  On Saturday, December 3rd the four of them took a road trip to Ohio for the exam to become certified therapy dog teams with Therapy Dogs International.  Both teams passed with flying colors and as soon as their paperwork is processed, they will be full fledged TDI members, ready to start visiting and spreading their love around Louisville. 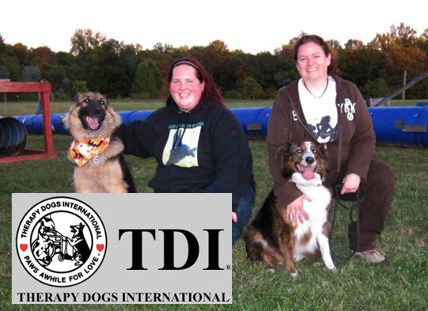 Leigh and Stephanie told us all about their day and I have included some excerpts below:

“After a little over an hour of waiting in a tight group of other dogs and handlers, it was our turn. We were in the last group of 3 to be tested for the day. You could tell that the evaluators dog, and older retriever, was getting very tired from being the helper dog for the meet and greet section of the test (16 dogs tested). The last dog was a happy little rottie girl (MEGA cute and sweet), she went to sniff the evaluators dog and the retriever snipped at her. So the evaluator removed her dog and turned to me and asked, “Can I borrow him real quick, I know he’s super reliable…” Here is someone who has JUST met me and my boy, and just from keeping a general eye on us while we were waiting to test over the past hour, calls him out as a good reliable dog.

THEN it gets better. He does the food “leave it” like there was nothing even there, he didn’t even LOOK. Followed by spot on sit, down, stay, and recall. When the evaluator came to collect the end of the long line from the recall she says, “Love all over him, he is just simply perfect, and so handsome.” So while my awesome dog remains his humble and charming self, I can’t help but have a slightly big head over the dog I have raised, socialized, and trained from a puppy. I’ve always known my Frost was a superstar, it is just awesome to hear it from another canine professional who had never met us.”  – Leigh Pridemore

“Mara did wonderfully the whole time we were waiting our turn, she was so patient, When it got to be her turn she was so excited we had to do the “leave it ” test twice! Did great on all her other tests! Perfect on the petting and totally not bothered by the medical equipment!”  – Stephanie Pearson

We are so proud of all four of you!  Not only does Louisville now have two more pet therapy teams, but we now have enough TDI members to start our own local chapter!  We can’t thank Leigh and Stephanie enough for sharing their wonderful dogs with the people who need them the most.  The world will always need volunteers and they have stepped up to fill a much needed role here in Louisville.  Hats off to you! 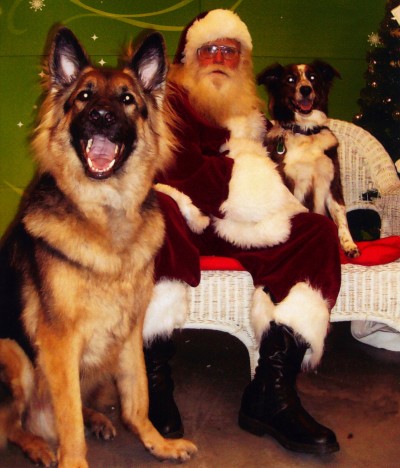 3 Responses to Happily welcoming Frost, Leigh, Mara, and Stephanie to the TDI team!