Yesterday, we crossed into Ohio, leaving West Virginia behind us.  Before we started this walk, we spoke to many people who had already successfully crossed America on foot. Everyone clearly had their own style, methods, advice, and opinions, but one thing remained consistent:  Whether you are coming from the East or the West, West Virginia is the most challenging part of this entire 3,000+ mile walk.  We were warned that the terrain is brutal, the weather is unpredictable (places like Dolly Sods and Spruce Knob are known for seeing snow in July at times) and the people can be less than hospitable.  For many months, West Virginia has loomed in front of us, a land to be entered with great caution, challenging us to conquer it if we dared. 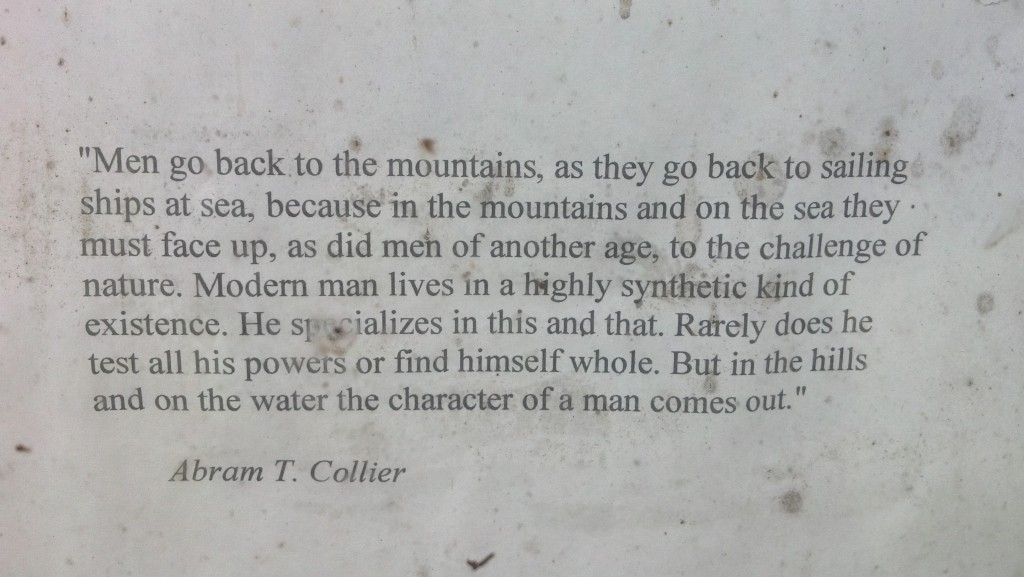 Words of wisdom at the West Virginia ADT "Welcome Center"

When we visited the Genesis Youth Center in Clarksburg last week, one of the the girls there asked if our opinion of West Virginia had changed after walking through it.  Did we still think that West Virginians are toothless, shoeless hillbillies making shine in the mountains? To be fair, John was born and raised in Kentucky, a state with a similar reputation to those from the outside.  We tried to keep our preconceived notions in check.  We had driven through West Virginia many times before and had always found it to be beautiful, but our direct interactions prior to walking through it had been minimal and we did not take the warnings from other walkers lightly. 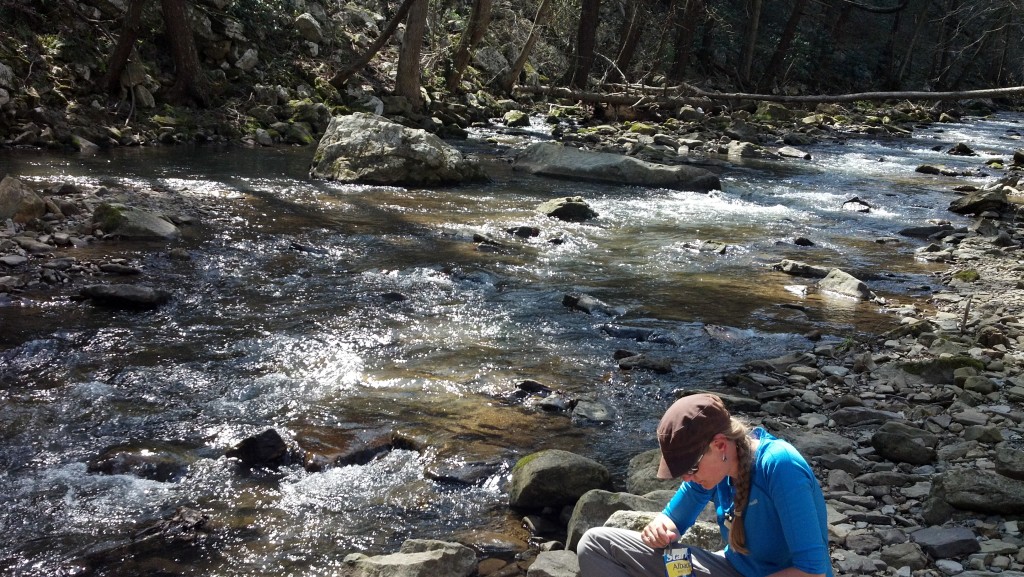 To answer her question, we told her and the rest of the class that over the two weeks we had spent there, John and I had fallen in love with West Virginia.  It is true that the terrain is difficult.  The roads climb and fall endlessly and mercilessly, with no regard for our heavy packs and 170-pound cart that we carried and pushed up to the top of each ancient mountain, and get dragged down to the bottom of other side – only to be greeted by another mountain waiting in front of us.  The roads that did manage to go between the peaks were riddled with blind curves, having little or no shoulder to protect us from oncoming traffic.

The weather was not an issue at all.  Perhaps we were just lucky, but even on the day that we went up and over Dolly Sods, it was in the 60’s, sunny, and comfortable despite a briefly passing shower that morning.  Though I am sorry for the farmers, the weather was comfortable and dry.  We’ll be hoping for rain in West Virginia now that we’re through. 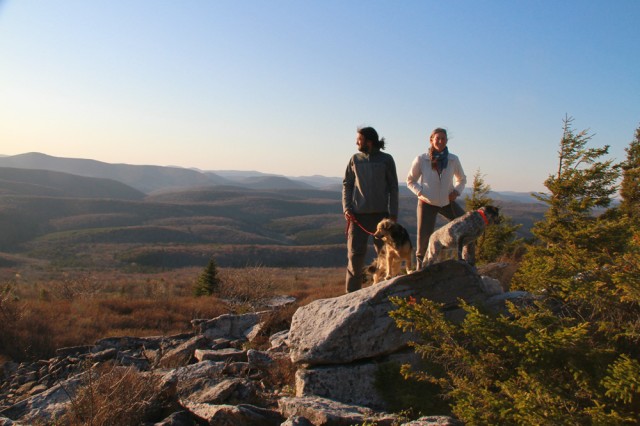 Now, our thoughts on the reputed “inhospitable people”:  If they were there, we did not meet them.  Though we were warned even by West Virginia natives to be careful where we chose to camp lest we get shot, we did not have a single bad experience with a person in all 238 miles of our time there.  We were welcomed into the homes of strangers for tea, coffee, and strawberries; invited to make ourselves at home by people who were out of town but left their back door open for us anyway; welcomed into a stranger’s birthday party for cake and family time; and offered help and advice any time we opened a map in public.  Even on the roads, cars moved over and left us generous room, even slowing down or stopping while traffic in the other lane passed so they could move over. 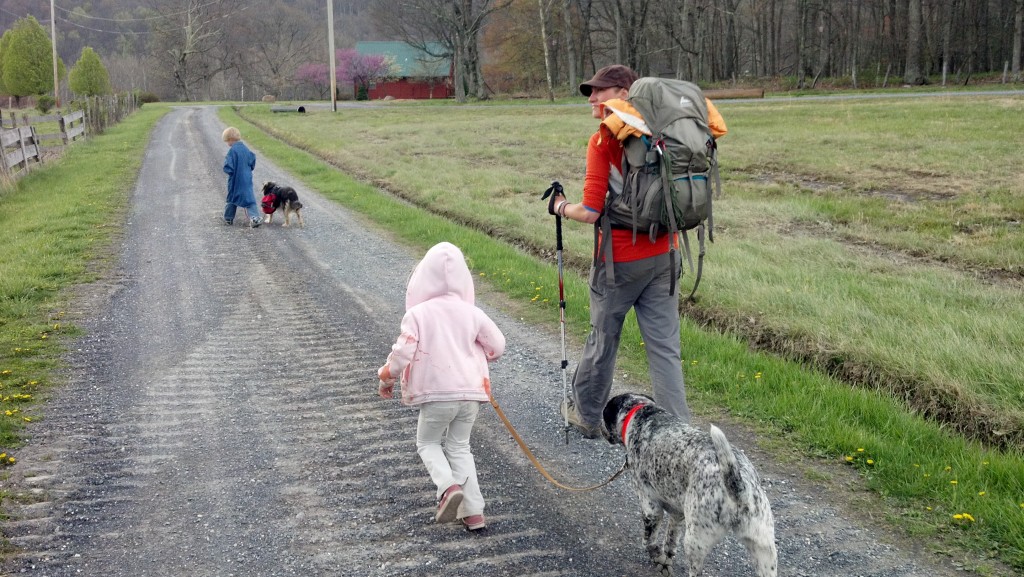 one of our favorite days

People from West Virginia are a tough group who have found a way to make a living in the rugged and unforgiving Alleghenies.  They are mighty proud of it, and eager to share their state with anyone who dares to visit.  We were told by one local, “You’ll get on just fine here – you’re rebels, just like we are.”  We wonder if perhaps West Virginia has the reputation it does because the people there like it the way it is.  If the secret got out that it is breathtakingly beautiful and full of loving, wonderful people, they would be flooded with tourists and new residents.  Perhaps they followed Seattle’s example of “Don’t move here, it’s rainy and miserable all the time.”  Whatever it takes to keep it wild and wonderful in West Virginia, just the way they like it. 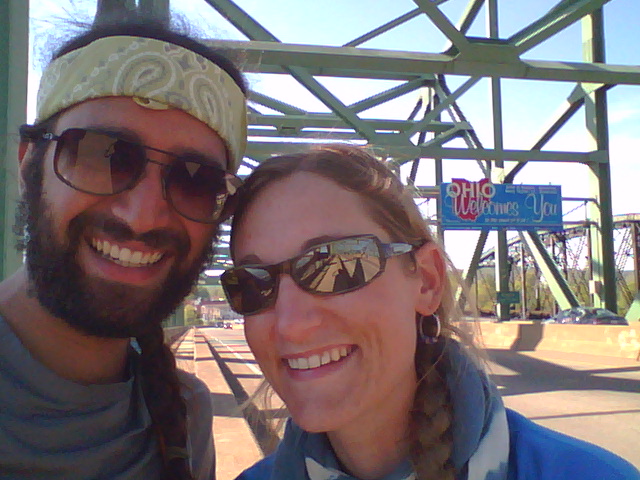 As we walk into Ohio with West Virginia at our backs, we are feeling stronger (despite John’s brief bout with the flu), accomplished, and ready for the states ahead.  I was born and raised in Ohio and can’t wait to walk across my home state.  Look out Ohio, I’ve got you in my sights and you’re only going to get flatter from here on out.

8 Responses to Reflecting on West Virginia