The End of Ohio

Oh, Grace, What a silly dog. She has been dragging her feet, wearing down the top edges of her front nails. Over many miles of lazy walking, she managed to wear a couple of nails down to the quick. It was not serious yet, but because of the mileage we have to cover, we simply couldn’t make her continue to walk on them until they had a chance to grow back. Even the dog boots we have weren’t a viable solution for the circumstance. Left with no other option, we simply had to suck it up and let her ride in the cart like royalty. She was really pleased with herself. 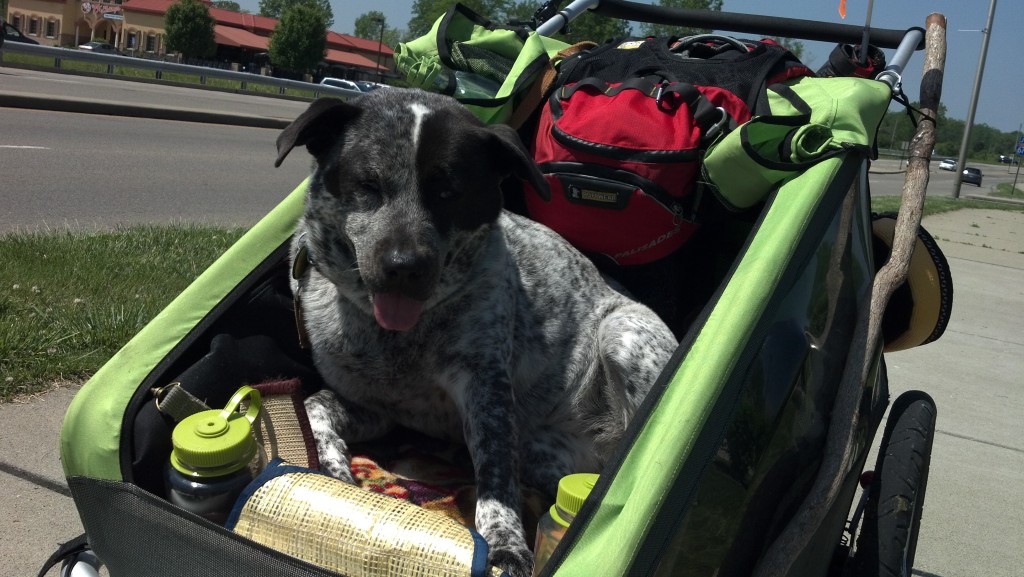 Comfy as a cow.

Kait and I had to pull a lot of weight out of the cart to make room for the 60-lb. baby dog. We both ended up carrying backpacks and taking turns pushing Grace’s chariot down the road. Thankfully, her shining personality and wry wit made it all worthwhile. 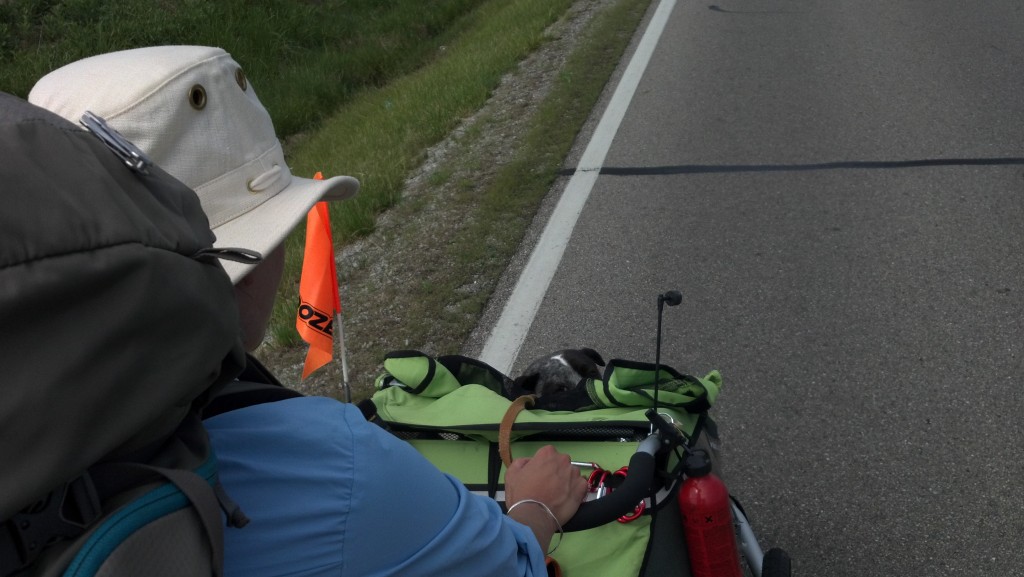 After leaving Yellow Springs we made about 20 miles, pulling into Dayton just before sunset. Many people had warned us about walking through West Dayton, but nobody mentioned the East side – and East Dayton was most unpleasant. Block after block, we walked past abandoned, overgrown houses, empty storefronts, and sketchy alleys – all exuding a generally hostile vibe. 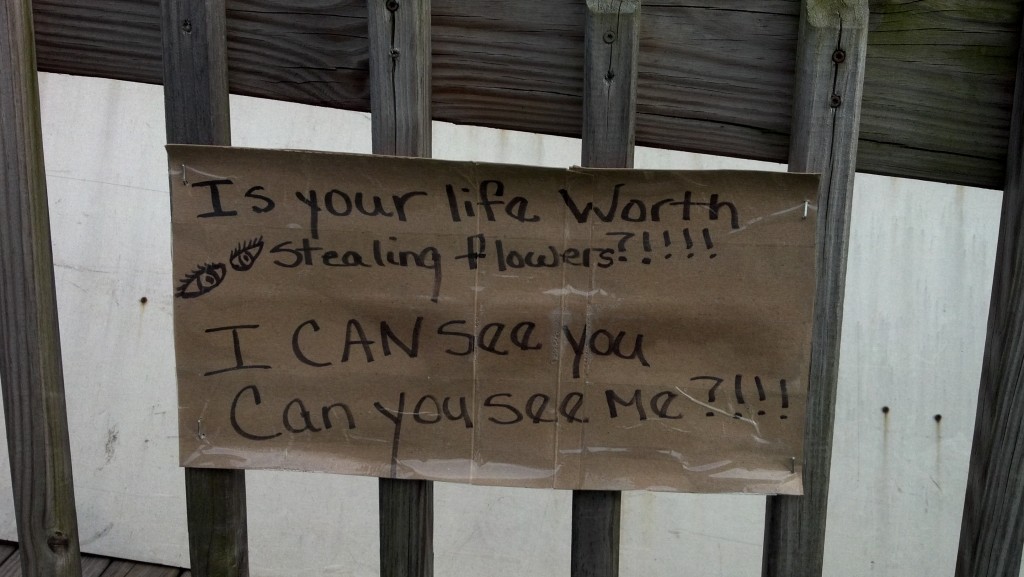 This sign was "guarding" a flower garden outside a sketchy house. Threats of death if you touch their flowers. Curious. 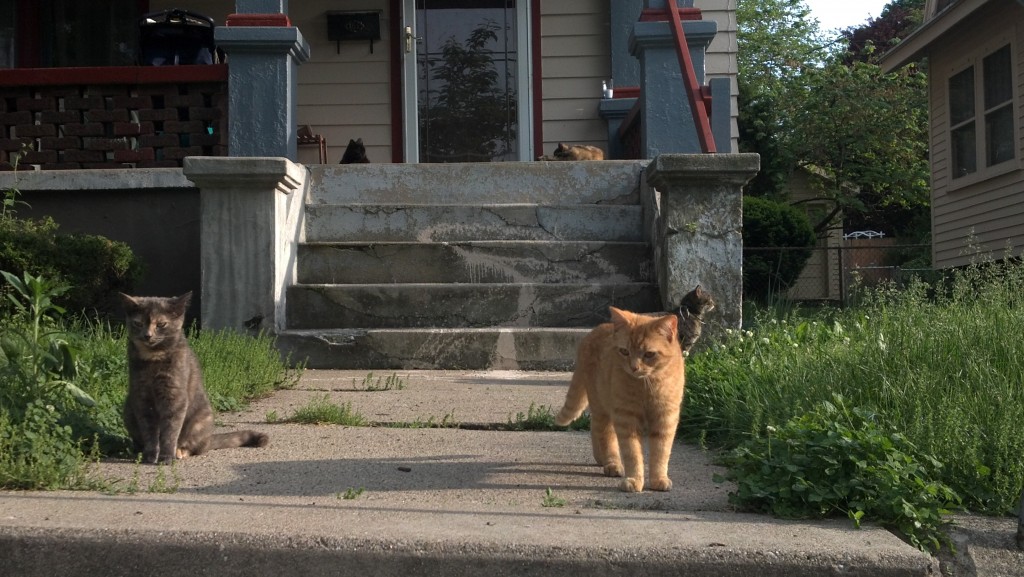 This brave batallion of porch-kittens ran right up to us and checked us out. My hair scared them more than the dogs did. 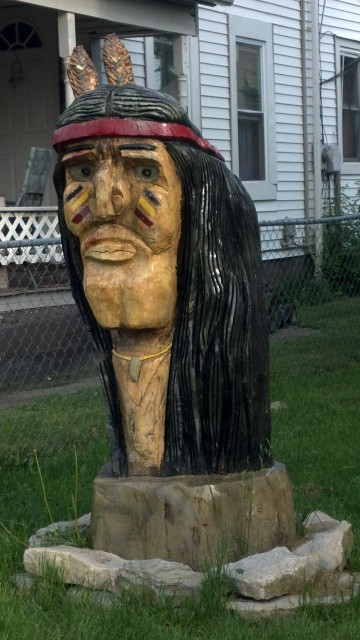 We moved quickly, racing the fading daylight across Dayton’s cracked and oppressive landscape. Thanks again to couchsurfing.org, we had an awesome spot to stay northwest of the city’s center. We spent the evening hanging out with Jared and his band of merry housemates in a community-style home. Over wine, spirits, and homemade venison chili, Jared and I shared stories of our mutual homeland of Kentucky. It was a shame that Kait and I were so tired and couldn’t stay up talking and drinking all night. The mattress on the floor sucked us in early, and we took off early the next morning. At least we know that there is a safe haven waiting for us if we ever return to Dayton. 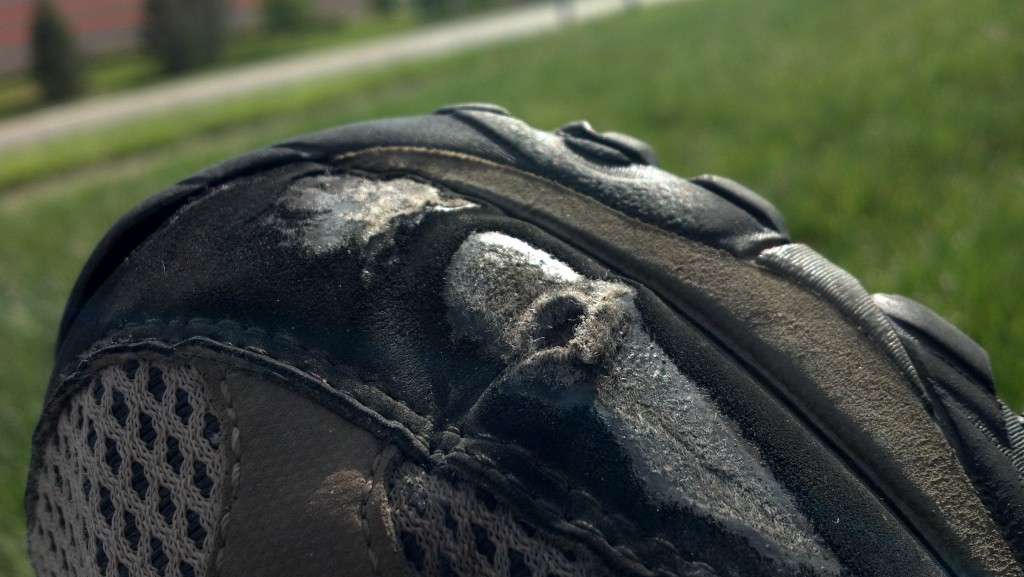 I'm going to get 1000 miles out of these boots even if it kills them. and it will.

We packed and walked onward to the Dayton VA Medical Center to visit with some veterans. Dayton’s VA is one of the oldest in the country and the grounds are beautiful. The quiet and understated beauty (and tragedy) of a military cemetery stands as a reminder to live while you’re alive, and be thankful to those who made it possible. I took no photograph, but I remember back in D.C. the night that Kait and I walked back to Virginia, and quite unexpectedly found ourselves walking next to Arlington National Cemetery in the dark – an endless sea of simple white headstones, neatly arranged in their strange and peaceful geometry – ghosts of white marble, standing guard in the night. Such a quiet place. But I’m traveling again… 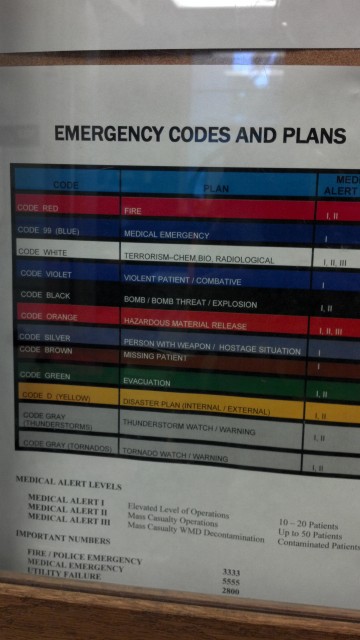 When we arrived at the VA volunteer office, volunteer coordinators Kay and Mark told us that the VA’s director, Glenn Costie, wanted to meet us in person. He thanked us for our service and wished us well on the walk, and after a photo-op we got down to the real work. Mark took us up to the 9th floor, which he said was essentially hospice care. It seemed as though every room we visited overlooked the white stone fields that stretched across the property. With Mark’s guidance, we made our way from room to room, meeting some amazing people and letting the dogs do their work. 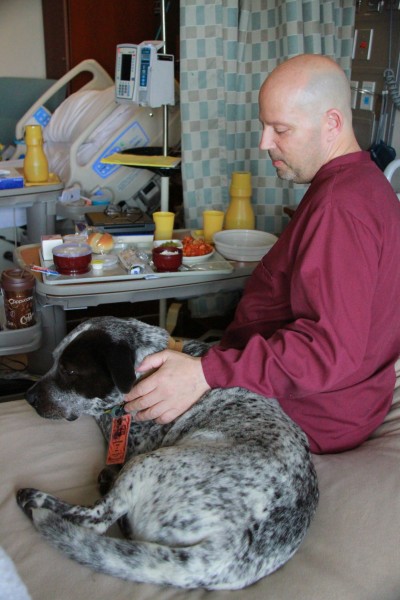 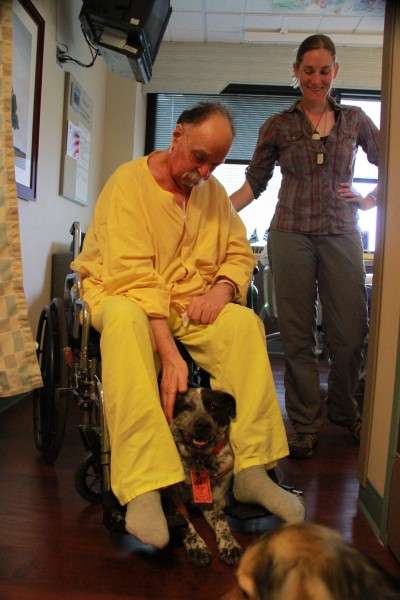 This man broke my heart when he teared up. Be strong, brother. 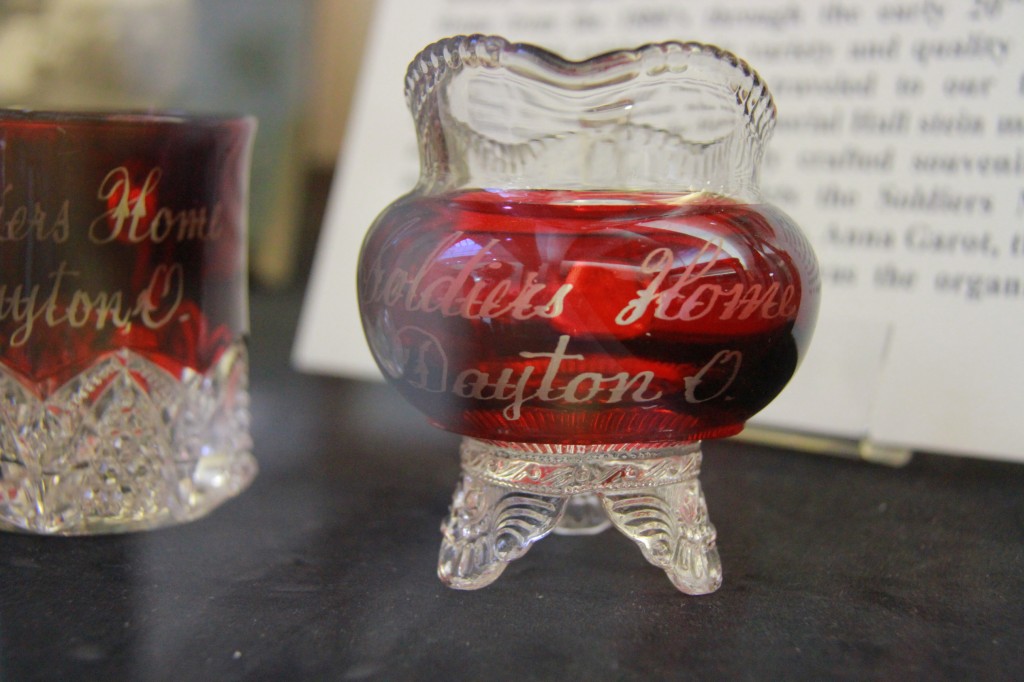 Historical relics from the original Soldier's Home of Dayton. 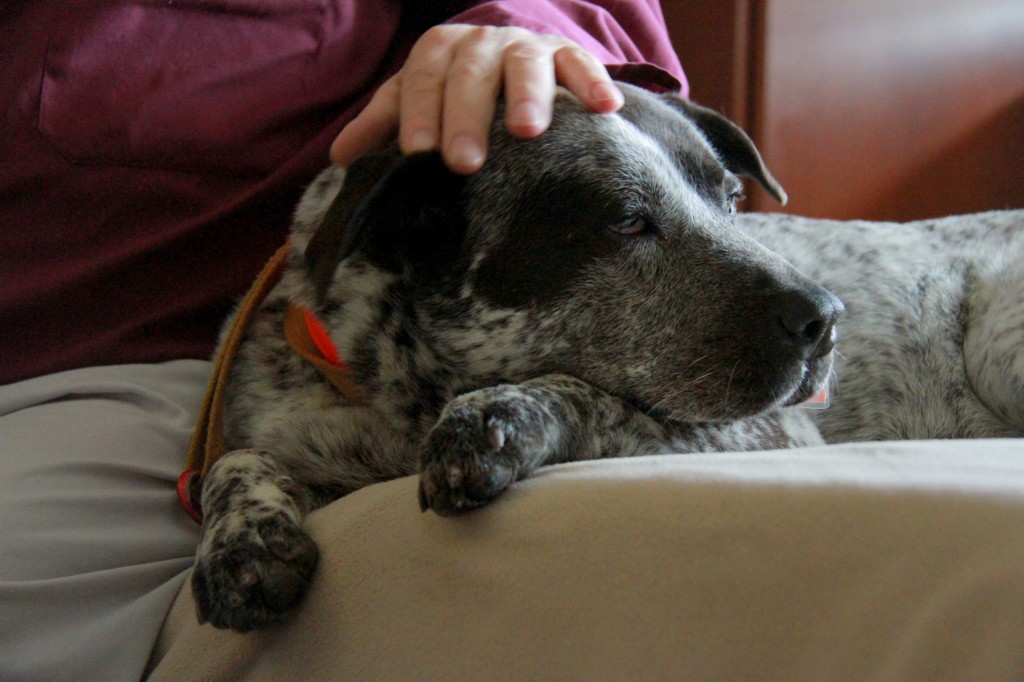 Mark gave us a little historical tour of the Med Center and bought us lunch in the cafeteria before more visits. When we were wrapped up for the afternoon, Kay asked us where we would be going next. She wasn’t at all excited that we would be walking out through West Dayton so late in the day, and insisted there was nowhere suitable to camp between there and New Lebanon (our next mail pickup). With a magic phone call, she arranged for us to stay at the hospitality house on-site to wait out some icky weather. She even told us to stop into the cafeteria for breakfast before we left! The Dayton VA truly went above and beyond to make sure we knew how much they appreciated our work. They run an amazing facility, and it was our pleasure to visit them. 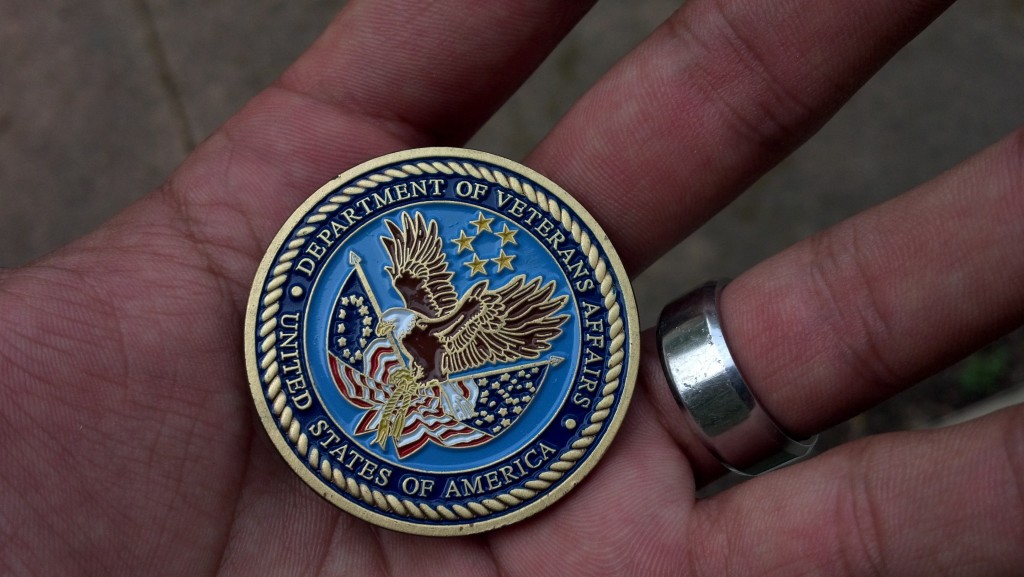 "For service to those who served."

Finally free of Dayton’s city streets, we wandered our way out into the country once again. There was a strange sort of rural sprawl leading West from the city limits…not quite the suburban-strip-mall-sprawl, but not exactly farm country, either. In New Lebanon, we picked up mail from my mommy as well as packages from OJ and Amber containing vital pieces of equipment that we had left at their houses. Thanks, friends! You rock.

Passing through New Lebanon, Kait saw a sign for the Dixie Diner. We stopped in and snagged some cheap and delicious walking fuel. The staff was curious, and after we told them what we were up to they brightened up. Apparently, we had looked a little…concerning when we first walked up. Maybe it was my crazy hair. Regardless, they were sweet as pie and even comped our meal. Too nice, too nice. Go to the Dixie Diner, get the TootBurger with coleslaw and fries – it’s what the regulars eat. Later, we made it to West Alexandria, and the local EMS squad found us a friendly house to camp behind for the night.

The next day, we set out to cover the final leg of Ohio before crossing into Indiana. I was looking for a place to get a quick breakfast in Eaton, and I found a spot called “Dale’s Recreation.” Intrigued by the name, I called to see if they served breakfast. “All day” was the correct answer, so we went and found it. The old man behind the counter greeted us and had our drink orders before we even sat down. 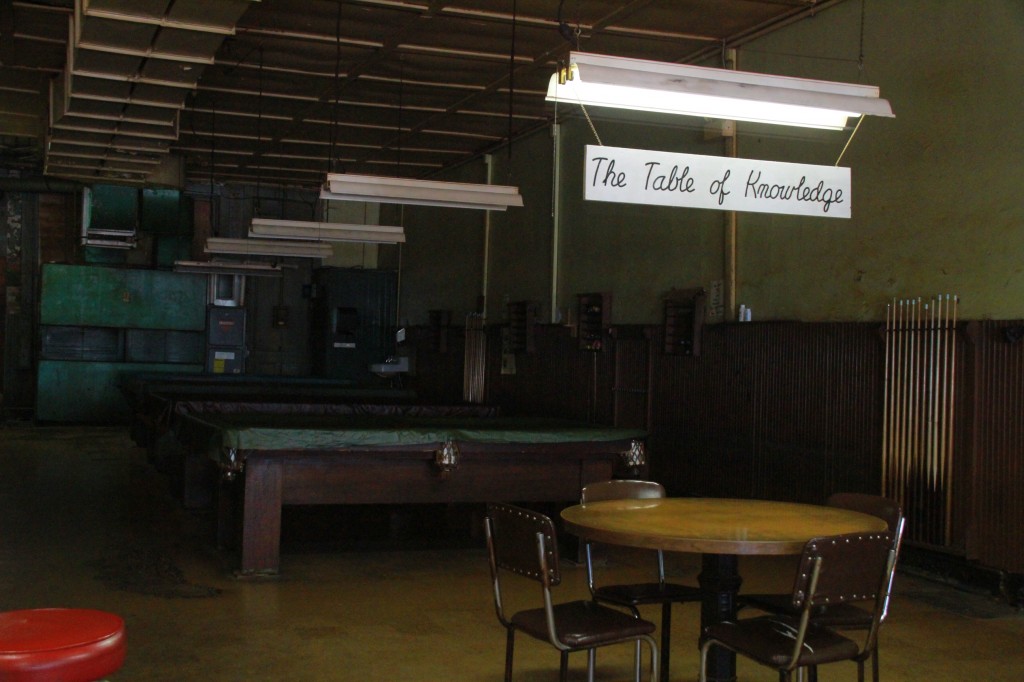 “Are you Dale?” I asked, knowing the answer was yes. Dale was a real charmer. He prepared our food to order, while singing to himself the whole time. He told me that he had been working there for 20-something years, and when the owner wanted out he bought the place. He has been there now for over 50 years. He asked us where we were heading, and smiled wide when we said San Francisco. “I’ve been to ‘Frisco a few times,” he said. “It’s a real nice place.”

We eat the All-American Breakfast a lot – eggs, meat, homefries, and toast – a killer way to fuel a day of walking. I have to say that without a doubt, Dale cooked the best damn All-American Breakfast that we have had thus far. Maybe it was the singing that made it taste so good, or the 50 years of practice that let him wield his spatula with such finesse. Whatever it was, it was good. When it came time to pay and leave, Dale refused my money. Instead of a check, he gave me a piece of paper with his phone number on it and told me to call him when we got to San Francisco. 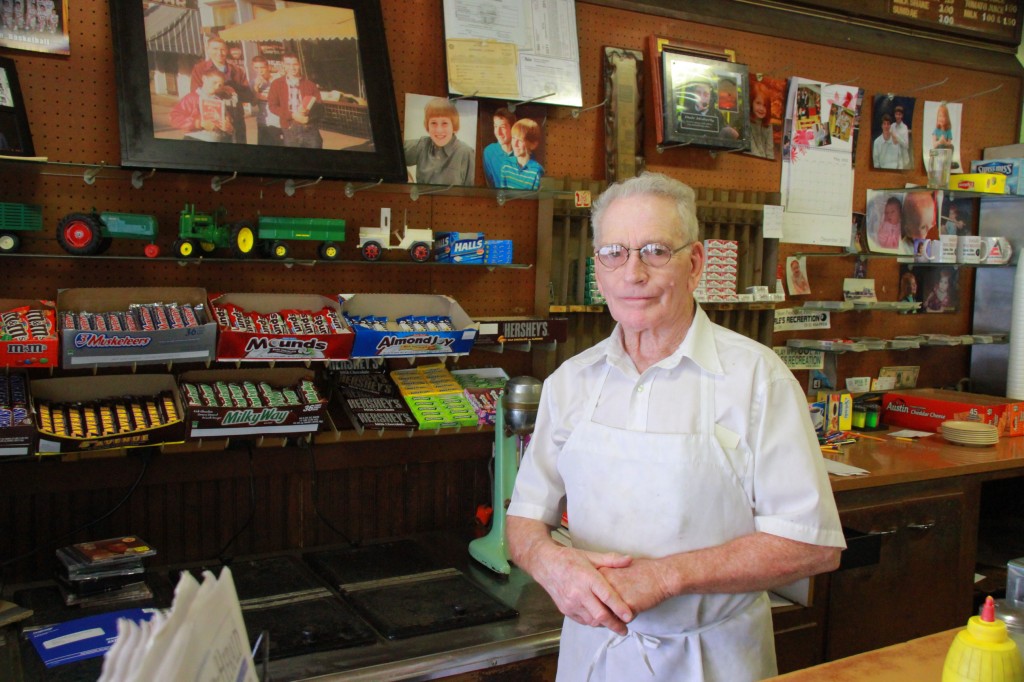 Our last day in Ohio was beautiful and sunny, not too hot, with easy traffic. We crossed into Indiana at Richmond, and entered a sprawling mess of fast food and big box stores on the city’s edge. My sister and her fiancee Matt took some time to drive up from Cincinnati and meet us for dinner. This was the closest we will come to Cincy or Louisville, and it was good to spend a dash of time with my family.  Gone in a flash, she left us to find a place to stay. I tried to get in touch with the mayor about camping in a park, but it was getting late and we ended up checking into a cheap motel for the night. The mayor called me back (I missed it) and gave us permission, but by the time I got the message it was too late. We got up the next morning, determined to make 44 miles to Muncie in the next two days. Kait has family there and after a pampered night in a motel (and a stale continental breakfast of cookies and coffee) we pushed hard to make the miles. 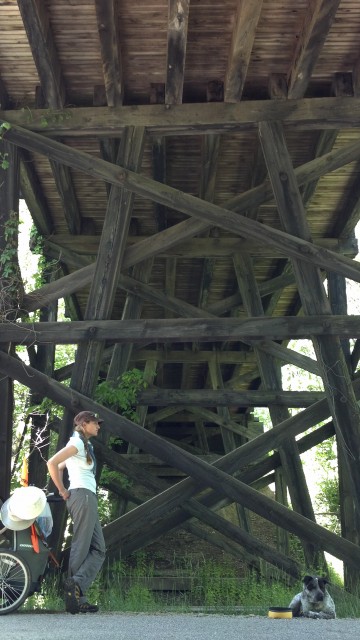 Along the Cardinal Greenway trail.

Coming out of Richmond, we picked up the Cardinal Greenway – another reclaimed railroad line, and our favorite kind of trail. The smooth pavement made for fast walking and easy cart-pushing, and the miles melted away. They spared no expense on this trail, and it has regular rest stops and benches along the way. 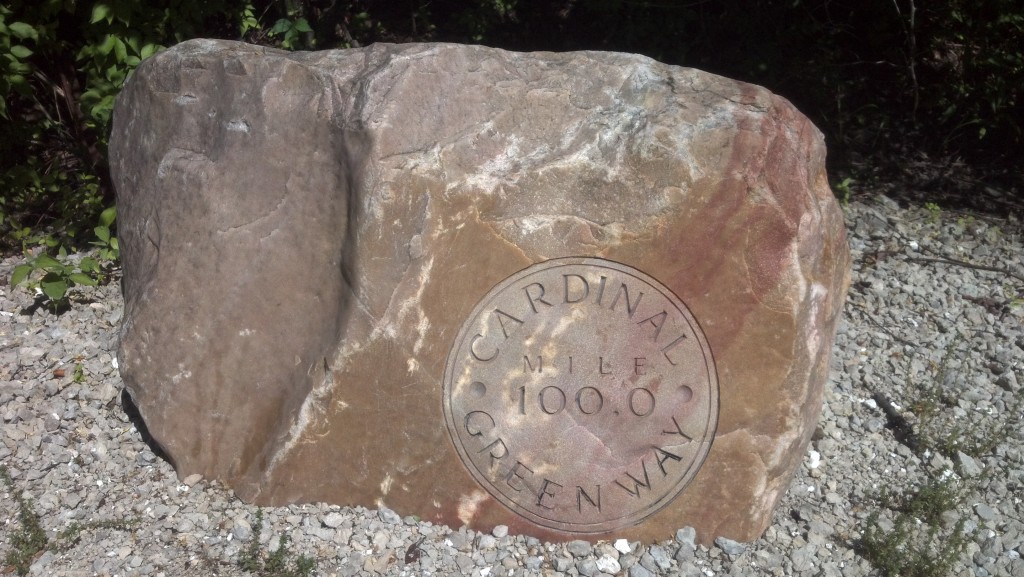 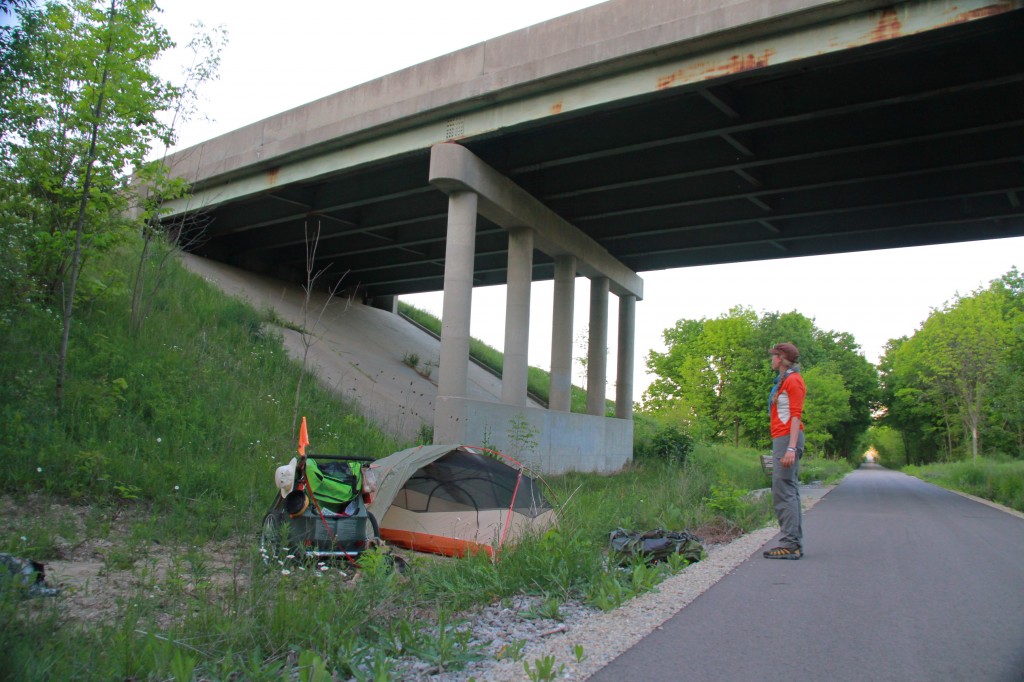 We ran into a trail maintenance-type guy named Phil, who called the trail coordinator and got us permission to sleep near a bridge that night. After 22 miles we camped under an overpass on horribly gravelly ground – but with permission, so it wasn’t too bad. The next morning, we got up and moved fast to make the final 22 miles to the safe haven of family in Muncie, crossing our 800-mile mark early in the morning. We arrived to a houseful of cousins and children, just in time to celebrate a couple of birthdays – that makes three birthday parties and three birthday cakes that we have gotten to help devour on this trip. 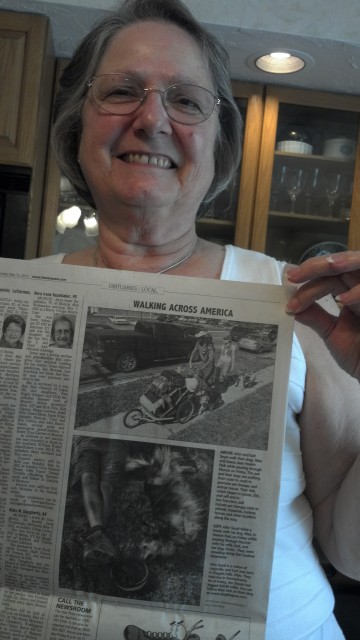 We made the local paper in Muncie. Aunt Ellen models.

This morning, we stopped into the Elmcroft Assisted Living Community to spread a little Mother’s Day love. Since we couldn’t be with our own mothers (oh, those pesky limitations of time and space) we figured we could visit some other mothers instead. They were happy to have us. 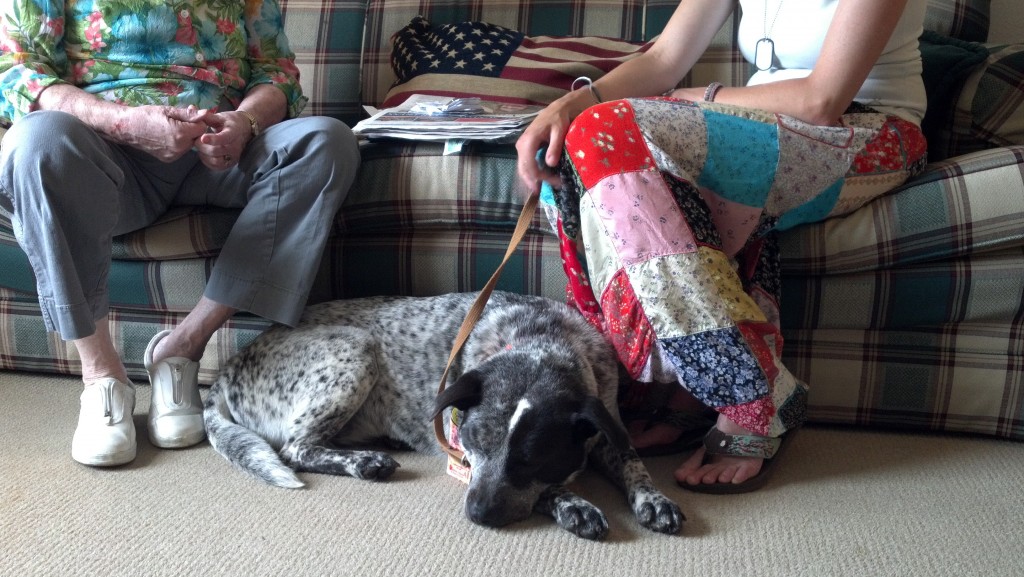 Now, we are going to take a week or so off of the trail. Kait’s grandmother is very near to passing away, and her large and tight-knit family is starting to convene up in Buffalo to celebrate her life. Betty Whistler is an amazing woman who raised 13 children (!!!), is Grandmother to 47, and Great-grandmother to over 50 children.  She has served as the matriarch of one of the most remarkable families I have had the pleasure of marrying into (well, the ONLY family I’ve married into – but who’s counting?) They have a special way of keeping closely connected, despite the size and scope of their family. When we found out that Betty was starting to wind down – now at 90 years of age and getting tired, but still sharp as a tack – we were offered a ride to Buffalo with Kait’s Aunt Ellen and Uncle Mike. It is no accident, no coincidence that we happen to be right here, in their home, and with room in their car for us and the dogs when the time has come. The Whistler clan is coming together in love and unity, and it is only right that we take some time to be with family.

The trail will be here when we return. 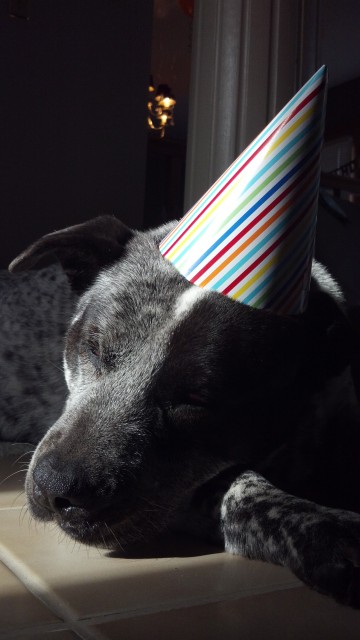 7 Responses to The End of Ohio