Mom and Dad, you probably shouldn’t read this.

Seriously, it will only make you worry.

A couple of days ago, we were walking out of Paxton. We had been walking along Route 9 since entering Illinois. 9 is a two-lane road, with a gravel shoulder that is way too rough on our pushcart. Thus, we have been walking in the edge of the lane – facing traffic, as always. Everyone on the road has been patient and understanding – especially the big trucks.

Walking down 9 out of Paxton, we saw a car approaching us at speed, riding the white line. It was obvious that the driver didn’t see us, and we took evasive action. I made a move to steer off the road and into the shoulder, while doing my frantic “PAY ATTENTION, THERE IS A PERSON RIGHT HERE” wave.

All four of us were clear of the car, but just before he got to us he slammed on his brakes and cranked his wheel hard to the left. With a dramatic “SKREEEEEEEEEE,” his brakes locked and he jack-knifed across both lanes of traffic, coming to a stop just ahead of us in the road. Lucky for all, there was no other traffic present at the time. We walked past, I thanked the driver for not killing us, and he muttered curses as he straightened out and drove off.

Now, to be clear: We were out of harm’s way before he even saw us. The locked brakes and oversteering were a panicked reaction from the driver. Considering he probably wasn’t watching the road, it must have seemed as though we jumped out of nowhere and scared the sense out of him. The only other times we have been run off the road, it was a result of an obviously distracted driver – that texting kid in Maryland was lucky I didn’t catch his plate number and report him.

Yes, we are walking in the road. Yes, that is an inconvenience to many drivers. But driving is a privilege, and the roads are public space. We have a responsibility to each other to pay attention when we drive, so that when things we don’t expect wander into the road – or another driver swerves – or any number of unanticipated events occur – we see it happen and don’t crash into it.

So just a friendly reminder to those distracted drivers out there: Please pay attention so you don’t kill yourself or someone else. And to the 99.9% of drivers who have seen us and shared the road with us, Thank You – 1000 times, Thank You. 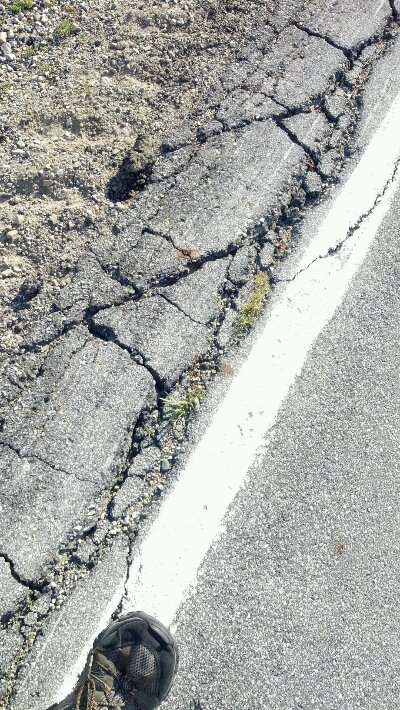 3 Responses to Mom and Dad, you probably shouldn’t read this.