standing around, talking in the dark 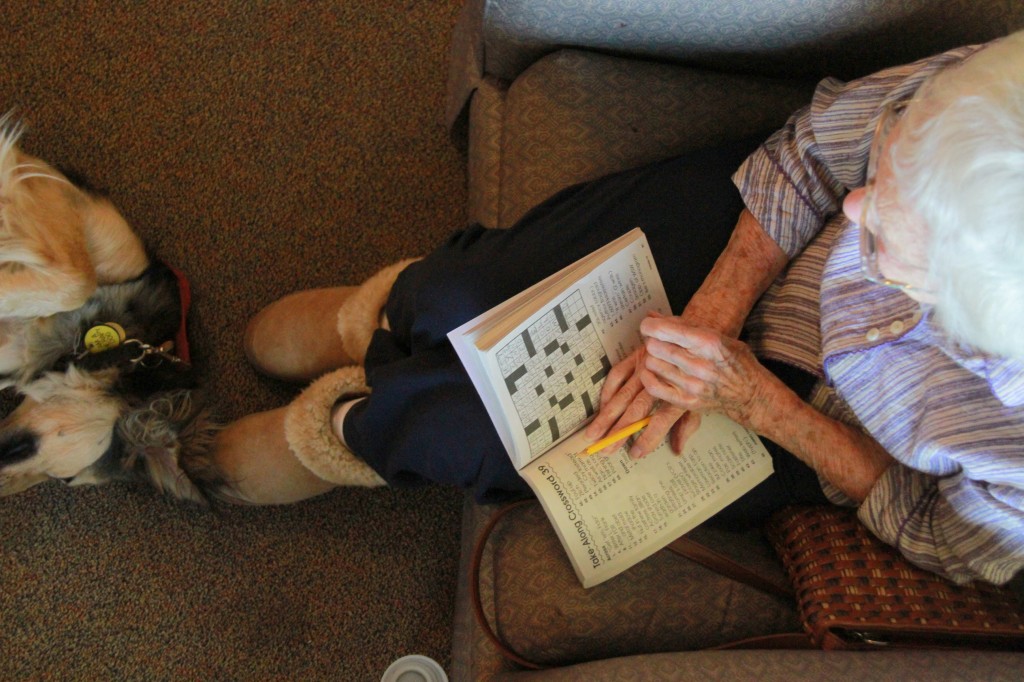 Iowa was a most hospitable and beautiful state. Even though we are half melted from the relentlessly oppressive heat, we are riding high on the joy and positivity we have found here. The southern route we found ourselves along took us through many charming small towns, and a plethora of state and national parks. 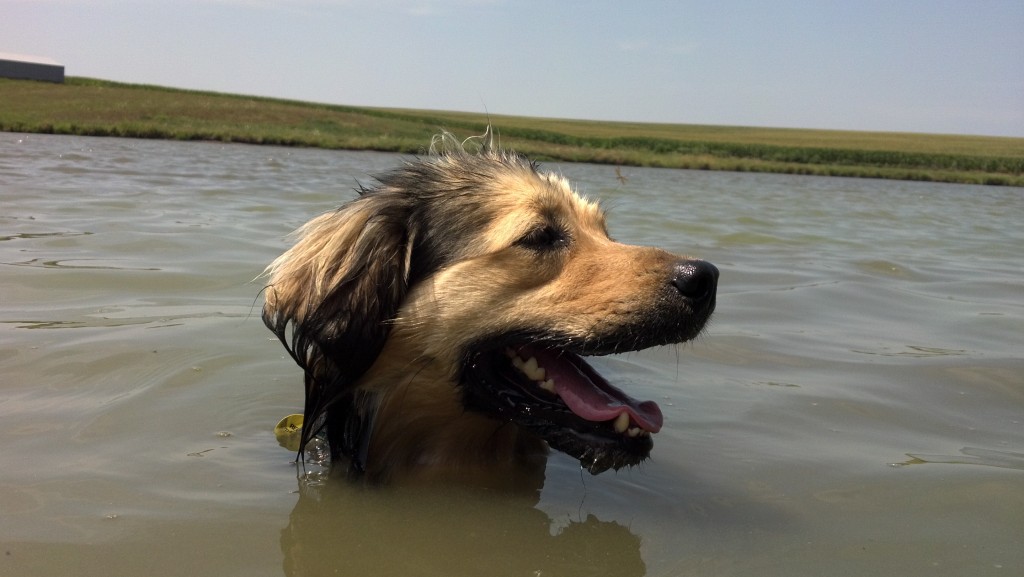 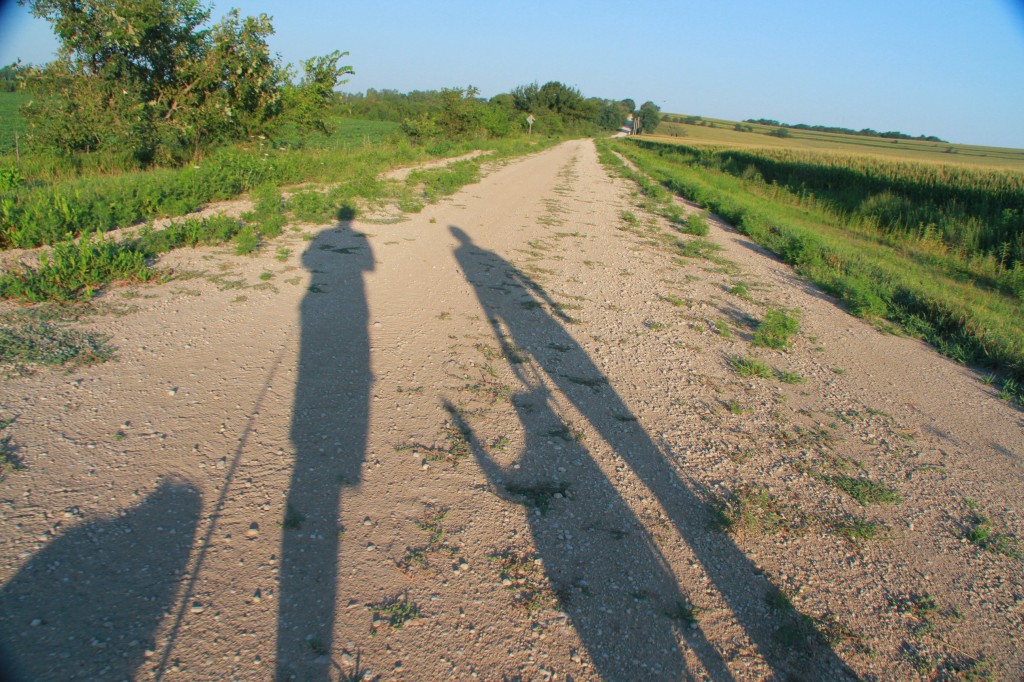 During our approach to Clarinda, we stopped at Windmill Lake Park for the afternoon. There, we met Jesse and Crystal O’Briant and their two sons, Drake and Dakota. They loved our project and shared food and good vibes all afternoon. When the time came for them to leave, they told us to give them a call if we needed a place sleep and shower near Clarinda. After a night at the lake and a blistering walk into Clarinda, we piled into the car and headed a few miles north to the O’Briant house in Villisca. 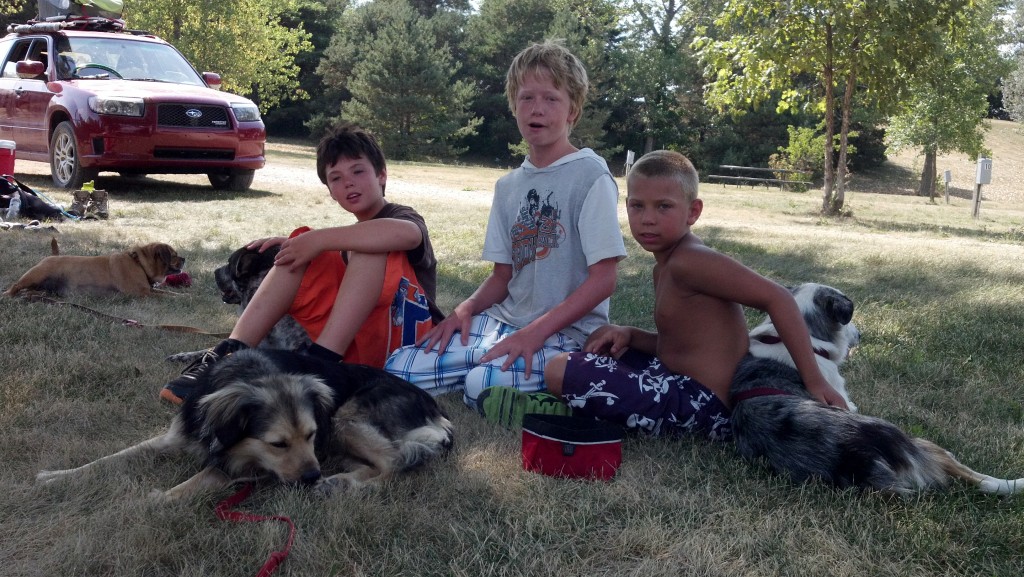 the O'Briant boys and our mutts.

Since we took in Jenny #9, we had assumed that the days of being hosted indoors were over – our pack is just too big. Much to our surprise and delight, Jesse and Crystal didn’t even scoff at the idea of inviting three humans and four dogs into their home. We would have been happy out on the lawn, but they opened their home to us and showed us some true Midwestern hospitality. They invited family and friends over and whipped up a barbecue feast, while Slater gave the boys guitar lessons. 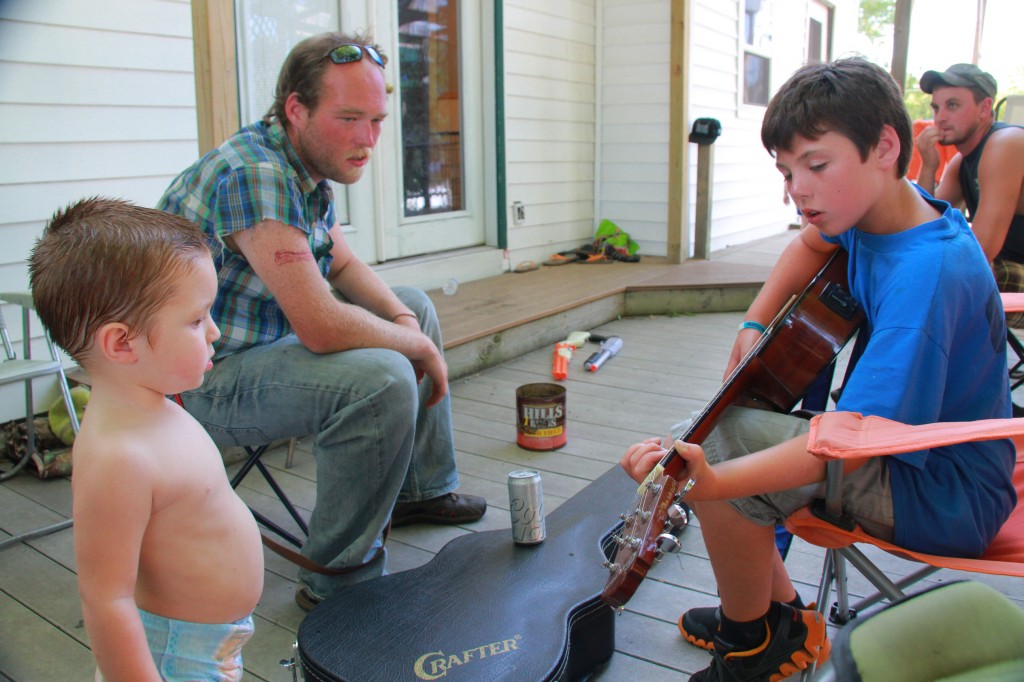 guitar lessons on the porch 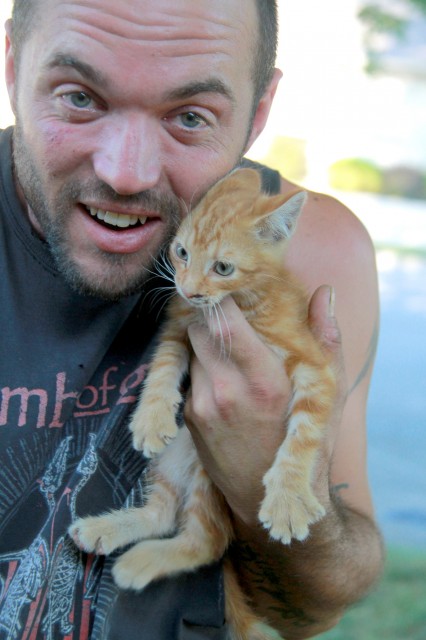 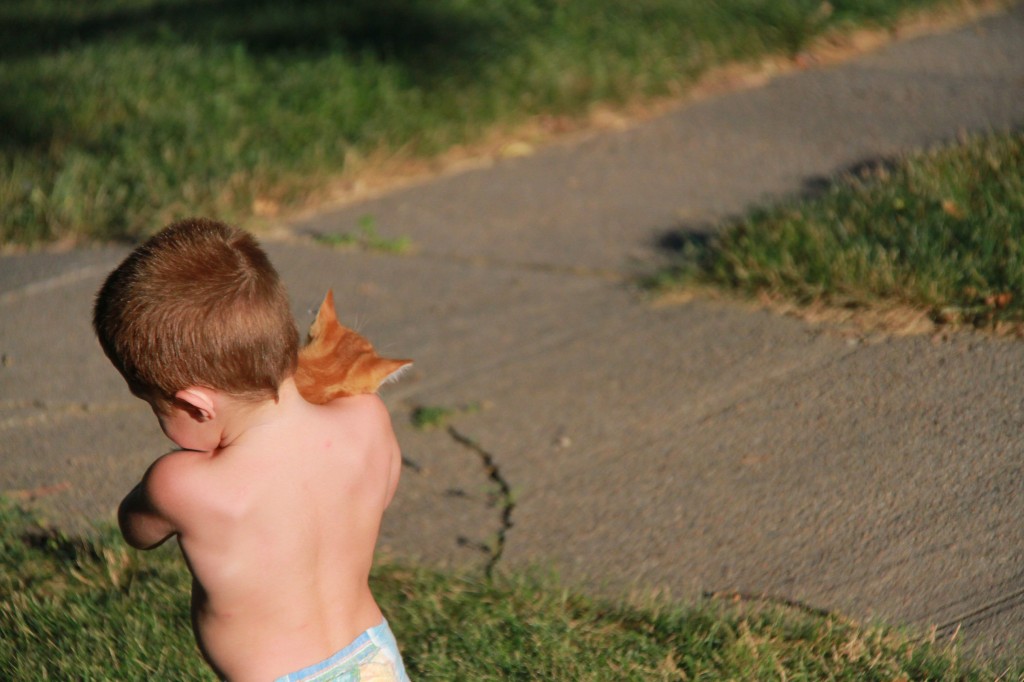 That night was our first chance to relax on a couch and sleep in an air-conditioned environment since our return to the road. The only other way we can get out of the heat completely is to buy something at a restaurant or gas station and loiter. The opportunity to sleep in the AC was too appealing and we were too sleep-deprived.  When the alarm went off at 4 AM, we did not get up. Instead, we decided to take the day off and try to find a facility to visit in the area. Crystal suggested Nishna Productions, a life skills and vocational training organization in Red Oak. 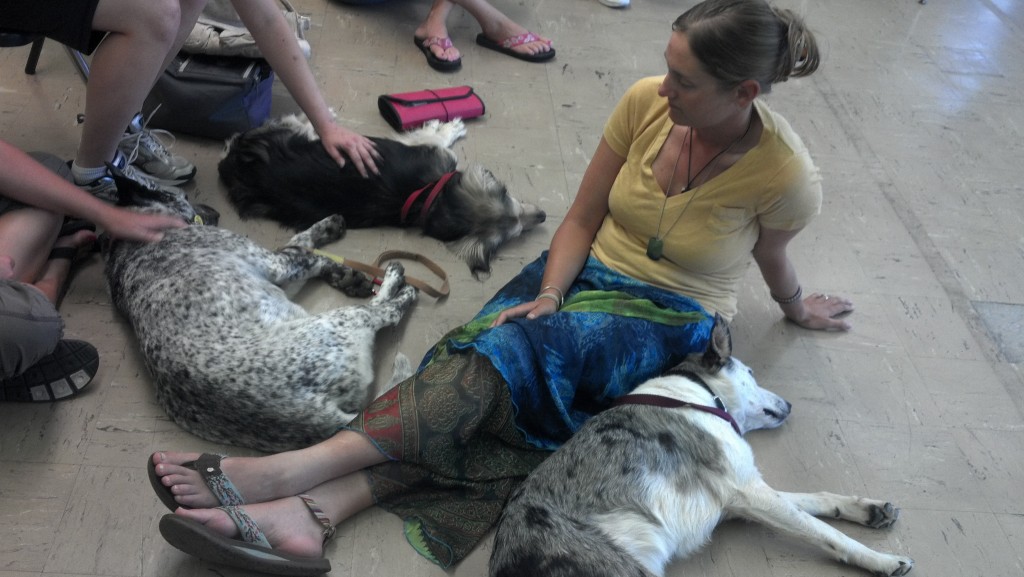 At Nishna Productions in Red Oak

The staff at Nishna was overjoyed to have us, and their clients loved the dogs. Once again, we were fortunate enough to have Slater join us with his guitar and he played and sang for everyone. One client saw Jon take his guitar out, and he left the room in a hurry – only to come back wearing a Stetson hat and holding a microphone. He sang along with Jon whether he knew the song or not, and their rendition of Johnny Cash’s “Ring of Fire” took the show. Before we left, the staff told us of another Nishna Productions location in Shenandoah – the next town on our route – and suggested we get in touch. In Shenandoah, the clients and staff were high-energy and full of excitement during our visit. They sang along with Slater’s songs, and even sang us a goodbye song when we left. 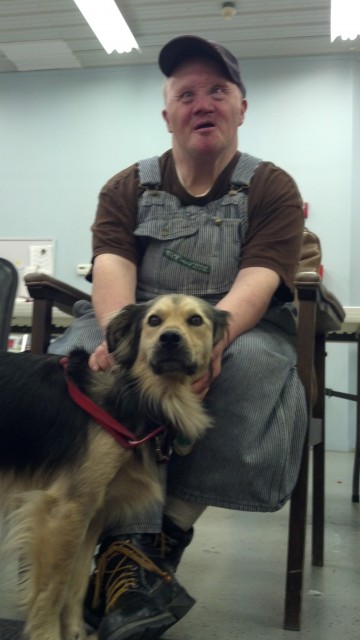 Max rocks it out at our visit to Nishna in Shenandoah

Just then, the most amazing thing happened: We met Nate Damm for lunch. 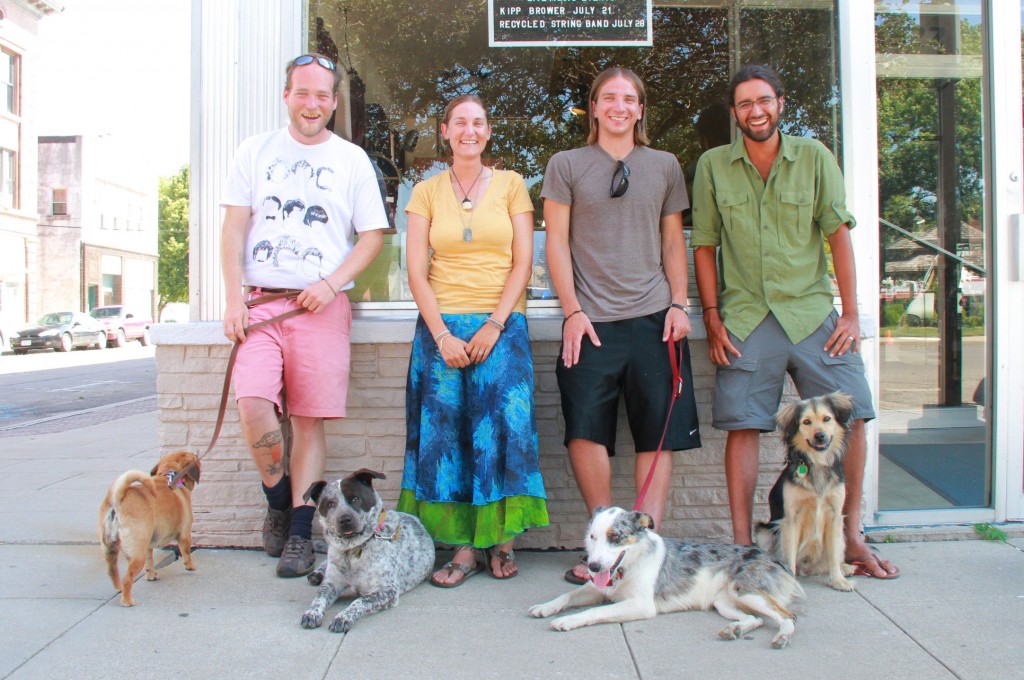 Nate walked across America last year, alone and unsupported. His writing is engaging, and his attitude is relentlessly positive. Back in March on our first day of walking, he called me at lunch and gave me contact information for the amazing Conner family. They became our first host family on the road, and truly set the tone of this entire walk in those early hours. Without Nate, we would have walked right past their house and never met them. We sat and talked about this insane thing we are all sharing, this pilgrimage of spirit. We tried to get Nate to fall in love with Jenny #9, but he might be running away to Mexico or Saskatchewan or somewhere this winter, and couldn’t take her (“Much to our relief!” says Kait.) Your loss, Nate! 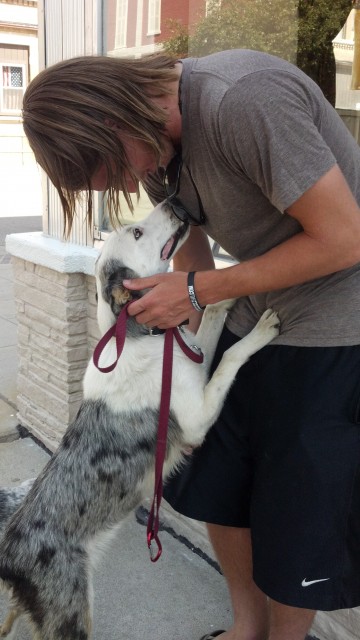 Back at the O’Briant compound that night, I asked Jesse why there were small deer antlers lying around the yard everywhere. He explained that he trains his dog, Tucker, to shed hunt for antlers and bones out in the woods. We were invited into the garage, where he showed us his collection of skulls and racks from deer that he had hunted, and countless pieces he had found shed hunting. 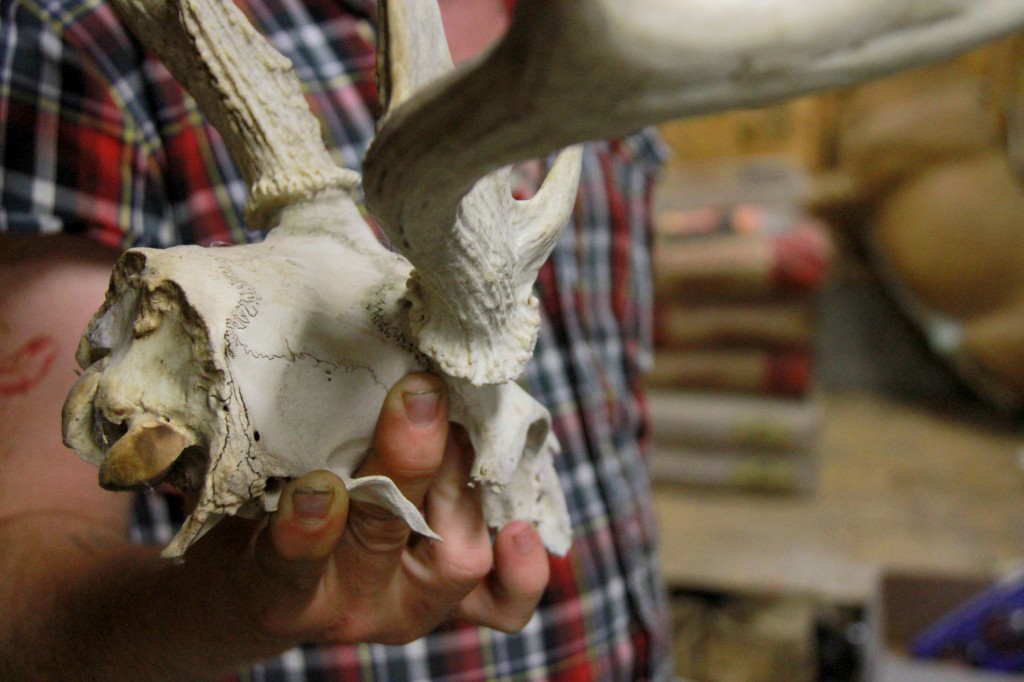 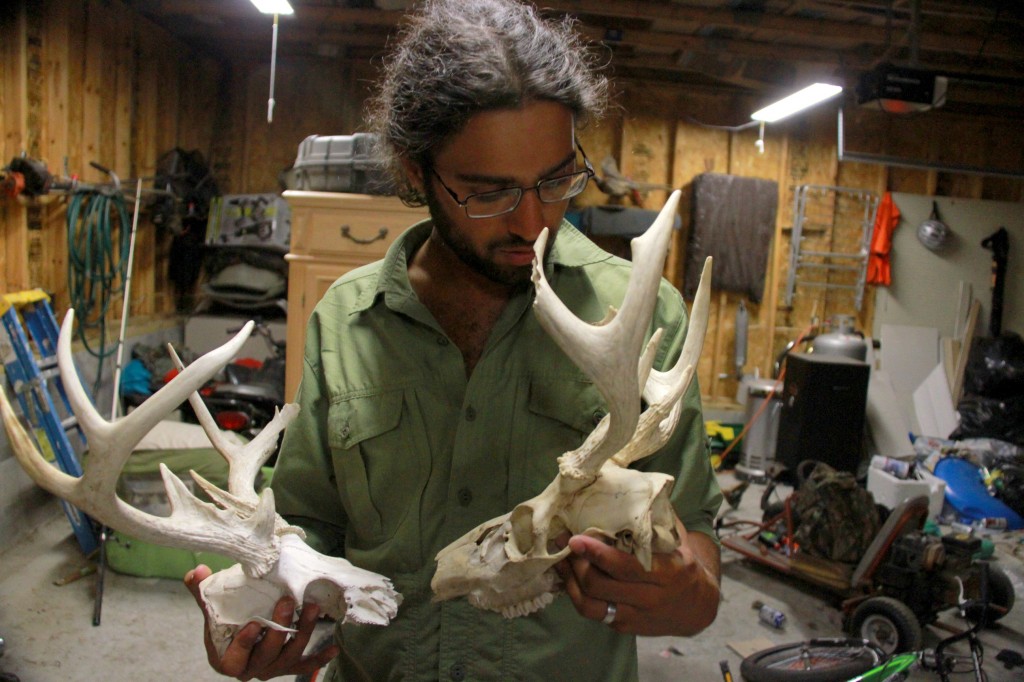 bones in the garage

I was studying the beautiful texture and geometry of a skull when Jesse said, “You guys should have some of these. Take whatever you want!” With limited space in the car, we didn’t know where we could fit a full skull and rack – but we found a way. 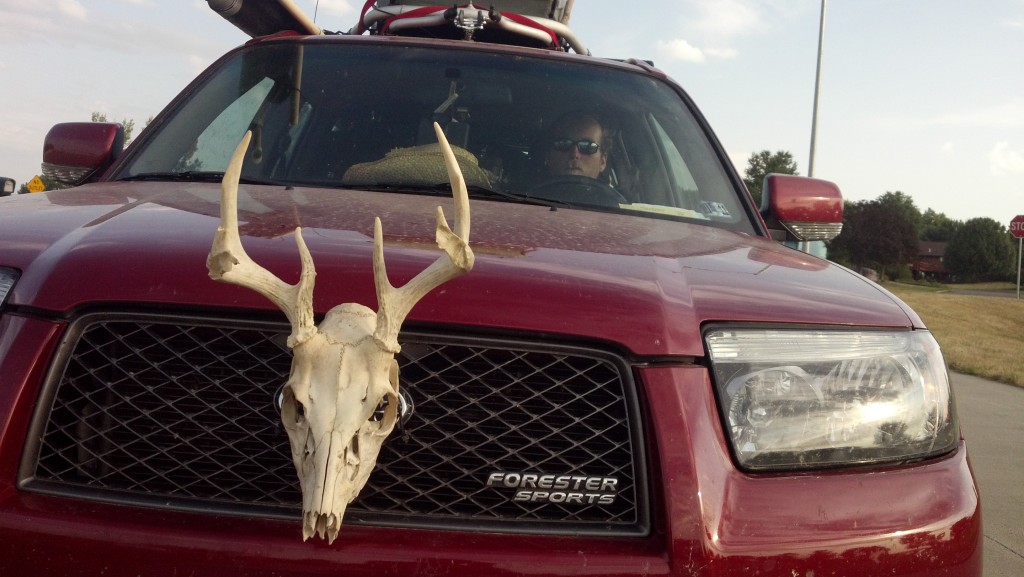 why I haven't had bones on the front of my car before now, I will never know.

And we walked on, meeting charming people everywhere we went. We stayed with Frank the Trader, who was nice enough to let me cook him dinner as a thanks for yet another night in an air-conditioned house. Also, I watched one of his cats battle a Praying Mantis, and it was quite possibly the most epic confrontation I have ever witnessed. I didn’t get any photos, but it is burned into my mind. 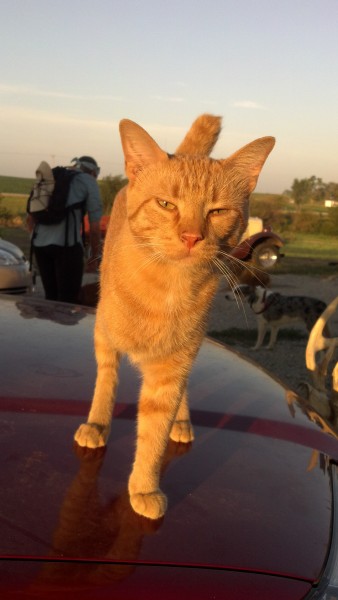 three-legged cat! (not the one who fought the mantis.) 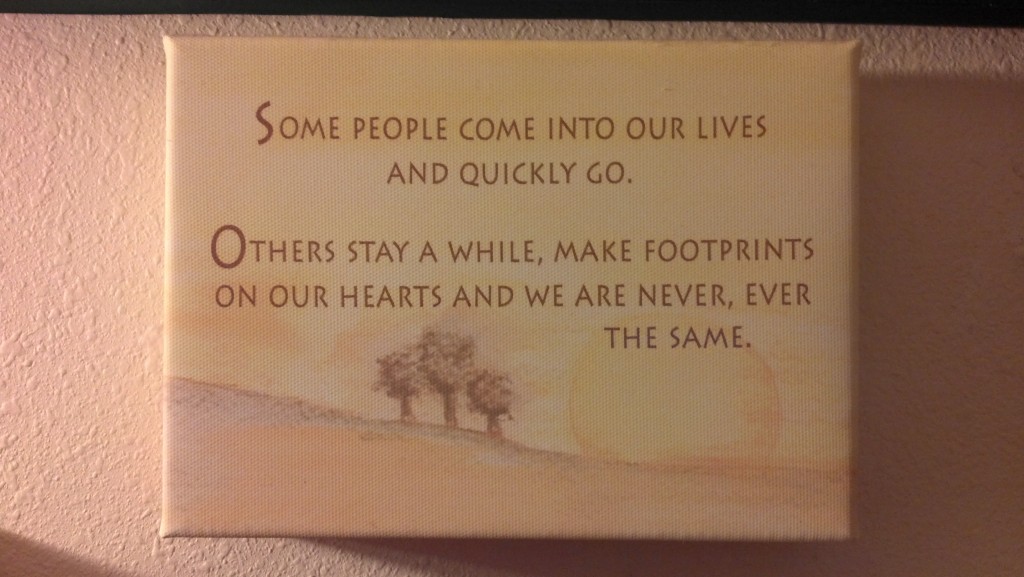 This reminded me of Linny and Walter. Also, I love reading inspirational quotes while pooping.

As we walked out of the Clarinda area, a woman pulled up next to us and rolled her window down. “Do you need a ride or anything?” We smiled and declined the offer, and found out that she had seen us walking earlier in the day as well. Julia, as she introduced herself, had never stopped to offer someone a ride or anything of the sort in her life – but she saw us walking with Max, Grace, and Jenny, and she said she felt a calling to stop. We came to find that Julia has been working as a freelance animal rescuer for many years, and has vetted and re-homed over 80 dogs in the area. (Julia is also a very talented photographer.) Later that day, she came out with her daughters, Kennedy and Marley, and chatted with us in the Pioneer Park Recreation Area. 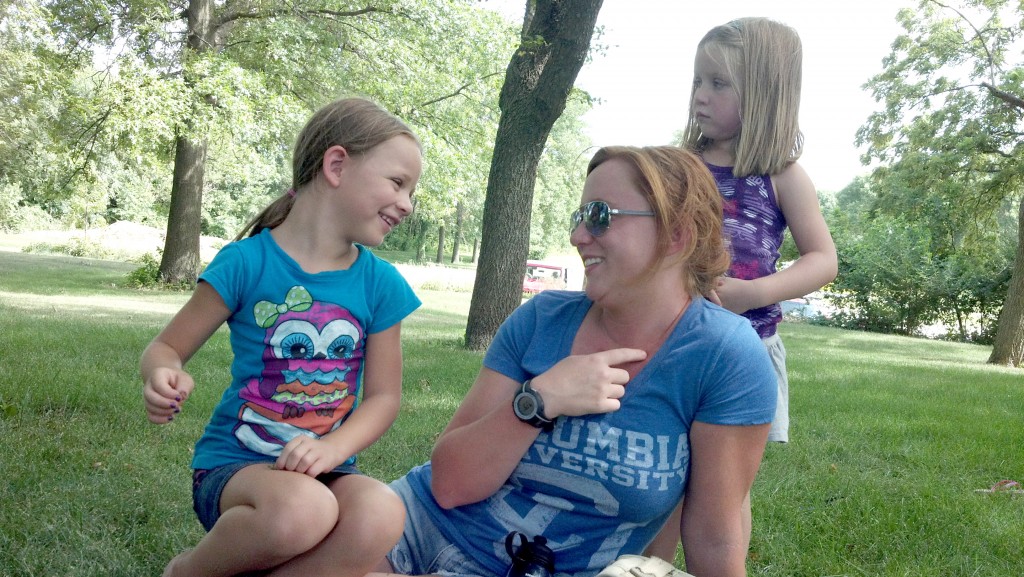 Julia Schull, with her daughters Kennedy and Marley

After moving to Riverton, Julia was astounded at the crass way many people in the community keep dogs – as if they are simply property, replaceable, and not worth much bother. She was troubled by all the dogs living out their lives on short chains, and the way people would let them roam free and barely bat and eyelash when a dog was struck on the roads in front of their houses. Julia felt motivated to do something, and started networking with other animal lovers in the area. She figured out a way to get the animals vetted without having to shoulder all of the cost herself, and has been overcome with the drive to help animals in need.

Julia’s unyielding drive to help animals – and to help us in our quest – is simply astounding. When she bought us an air-conditioned cabin in Waubonsie State Park, we were overjoyed. When we arrived to find that she had left us with enough food to feed a small army, we were speechless. And hungry. She knocked it out of the park. We had to repack the whole car just to fit all of the delicious snacks in the back. 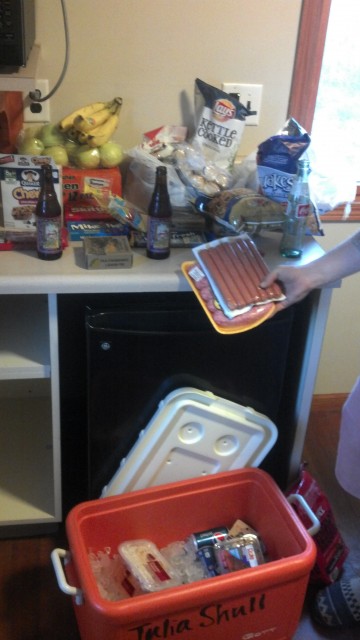 THE FEAST. she even got us a sixer of Fat Tire!

Our last night in Iowa, Julia invited her friends and family out to meet us. They offered us Gatorade, bottled water, donations, and endless moral support. We stood around outside, away from the lights so the bugs wouldn’t find us and bleed us dry, and shared our stories and endless gratitude for their support. Our sendoff from Iowa was as warm and inspiring as our welcome. The next morning, we crossed the Missouri River’s flood plain – which was completely underwater about this time last year – toward Nebraska. 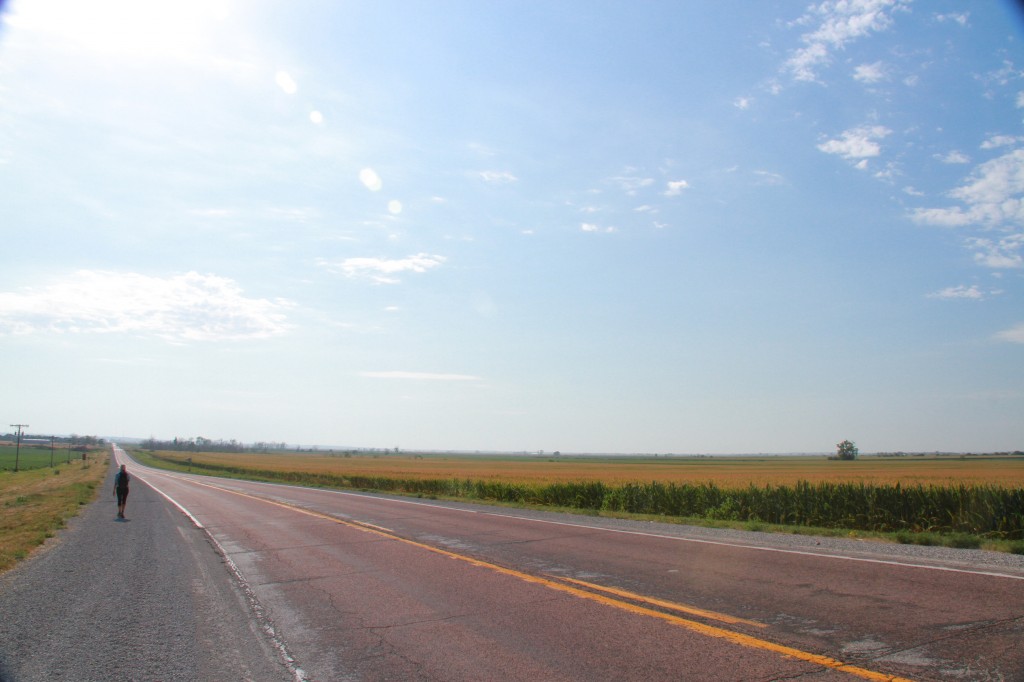 Across the flat expanse, we could see the bluffs rising up on the other side of the river. At that moment, we realized that the next time we would see a sight like that, it would be our first glimpse of the Rockies, out beyond the horizon. There are only 500 miles between us and Denver. 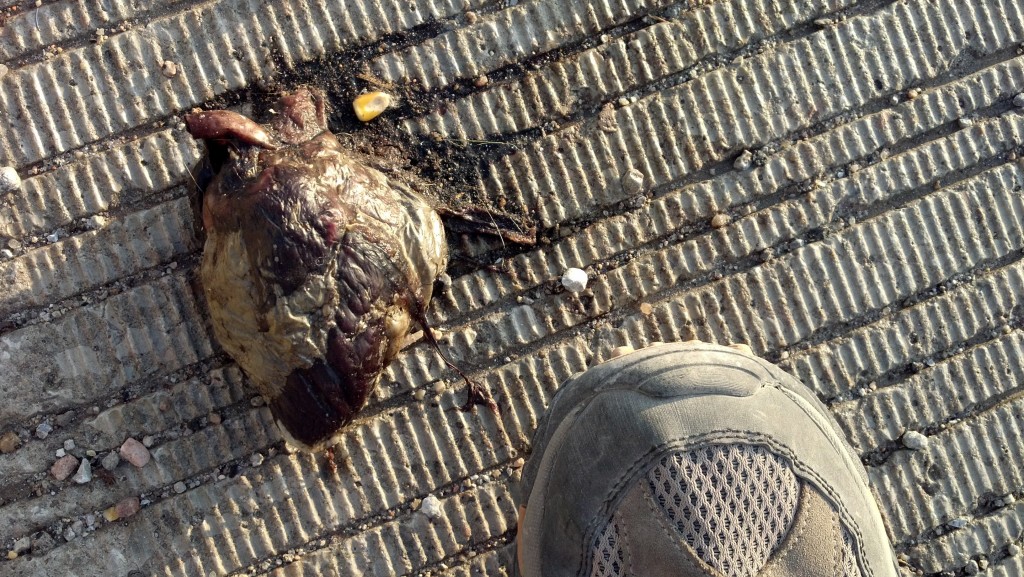 is anyone missing a heart?

2 Responses to standing around, talking in the dark