Ghosts on the Horizon

For weeks, we have been searching. 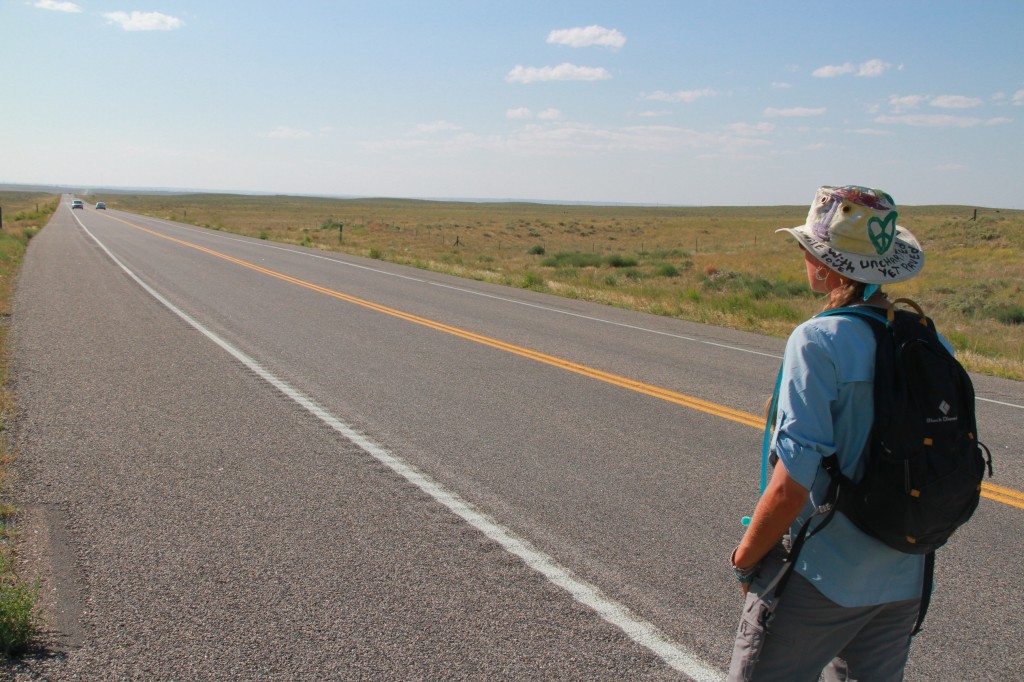 Every step, every mile, our eyes have been glued to the flat rim of the earth, watching for our first glimpse of the true dividing line between East and West. To be honest, Kait and I may have gotten a little obsessed with the suspense of our inevitable first glimpse of the distant Rockies. 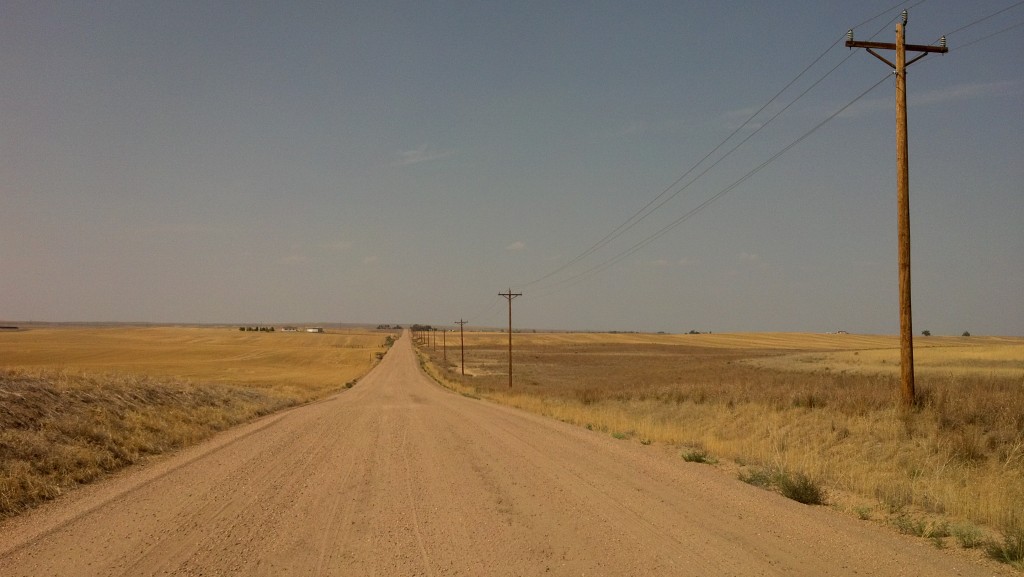 More than one coast-to-coast Walker told us of the magical moment when they first saw the Rockies, hovering out beyond them. They told us that we would see them for hundreds of miles – weeks before we reached the Front Range. Maybe they were exaggerating, or misremembering; maybe they really did see them that far away. But for us, that was not the case. We hoped and watched and scoured the horizon through Western Nebraska, but no luck. Onward into Colorado, and still no sign. 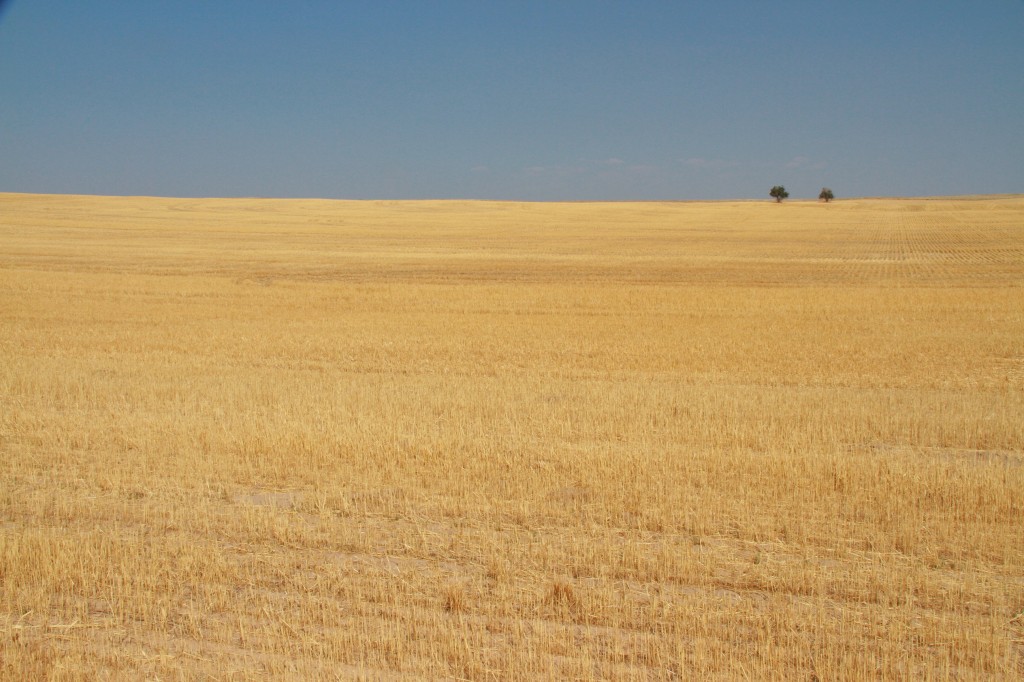 Thanks to this exceptionally dry and hot year, our western vistas are clouded by a haze of dust and the smoke of countless wildfires raging in every surrounding state. Without a clear view, we got within 100 miles of the Front range and still couldn’t see a sign of the dark blue peaks in the distance. We stared and hoped so hard that our minds began to play tricks on us. Ripples of heat and distant power lines became peaks and valleys, until we got close enough to have our hearts broken again and again – “No, that’s not them. Maybe over the next rise.”

bring me the horizon.

To make matters worse, Eastern Colorado started to drag on and on in the same flat prairie doldrums that made Nebraska so maddening. Over every rise, fields of corn and wheat stretched on without end. The only comfort was that we were steadily climbing in elevation. Most of the time. 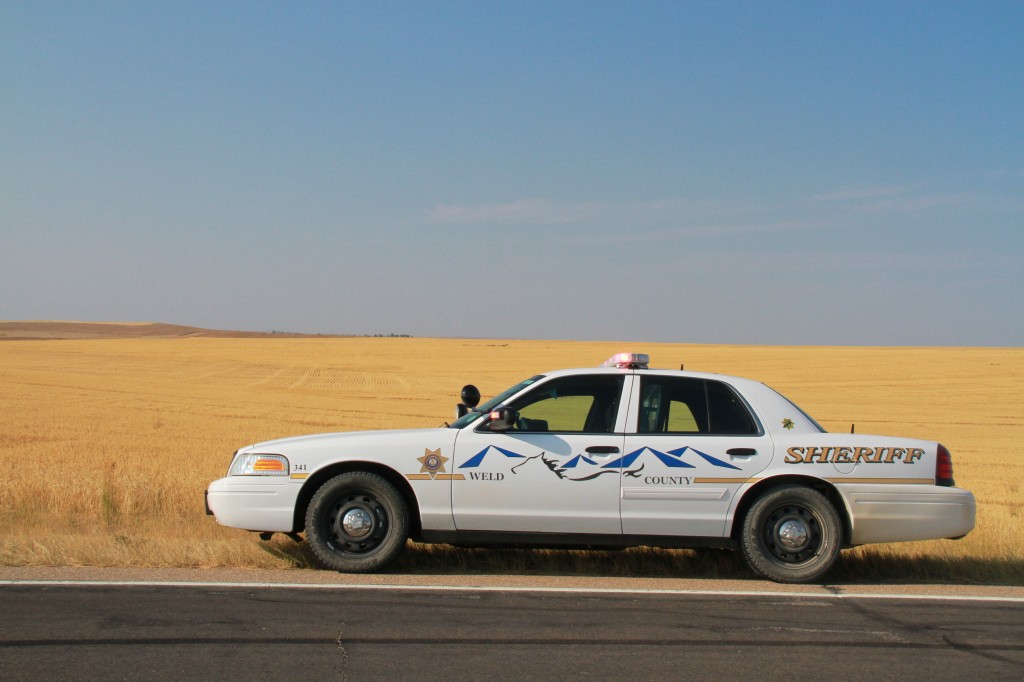 60 miles from Boulder, The Weld County Sheriff came to wish us well and offer assistance if we needed it.

Just west of Promise Valley, we started into one of the most harrowing stretches of road that we have encountered. Highway 52 is a narrow two-lane, with a 65-mph speed limit and no shoulder – and a LOT of semi traffic. Slater warned us of the treacherous road, and we let him take the dogs ahead for safety. We donned our day-glo yellow safety vests. For a few hours, we were too preoccupied with surviving and not causing a wreck to watch the horizon. Coming into Hudson, we were relieved that we would never have to walk that road again. 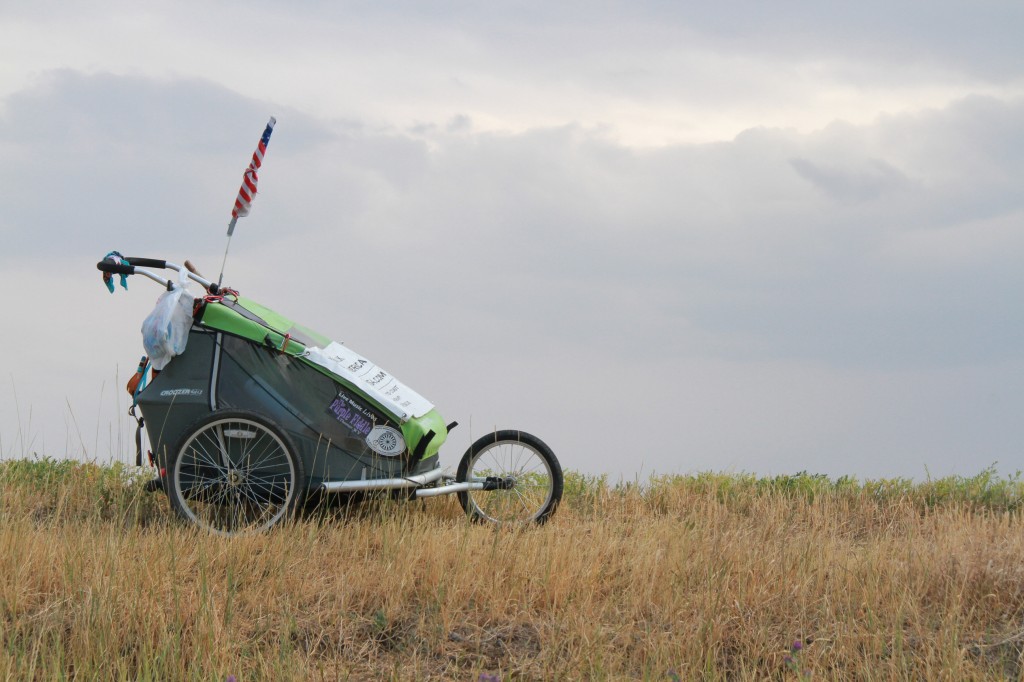 Quite suddenly, 40 miles from Boulder, the sun broke through the distant storm clouds and we saw a ghostly rise above the horizon. After weeks of agonizing anticipation, there they stood in their understated glory. Part of me wasn’t sure they were real. ﻿﻿We sat in a field of purple flowers to ponder and appreciate our first real glimpse of the Rockies. 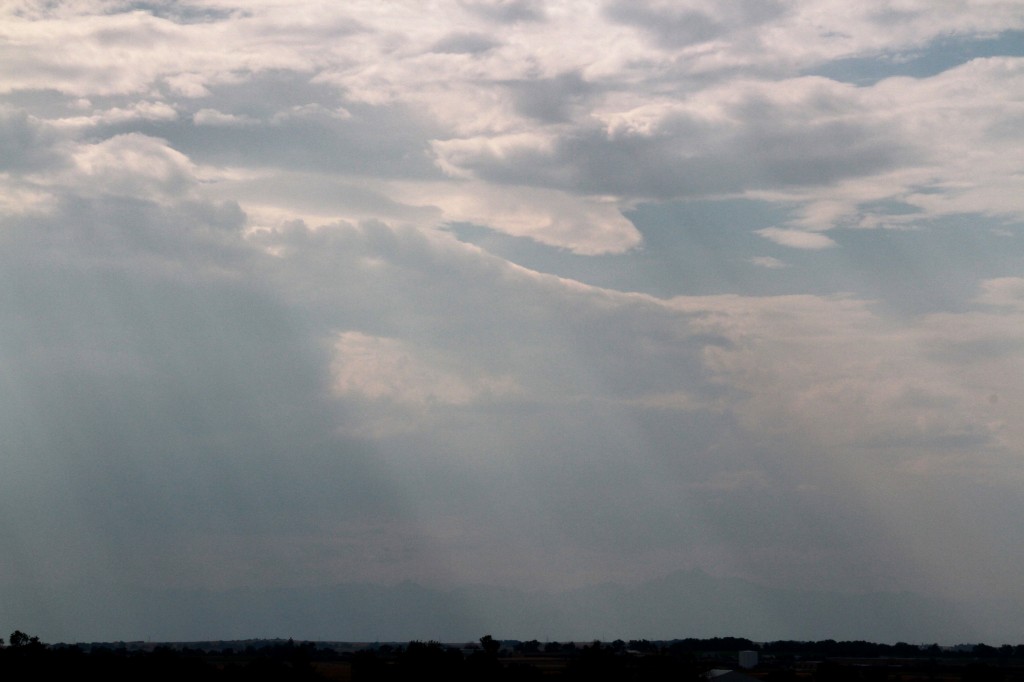 Reaching the Rockies is a large achievement. They are an imposing geographical boundary that must be crossed in order to reach the True West. We walked all day today staring them down, watching the light and clouds play across their peaks and faces as we edged closer and closer. Much of the higher regions remained shrouded in clouds as storms rolled through. 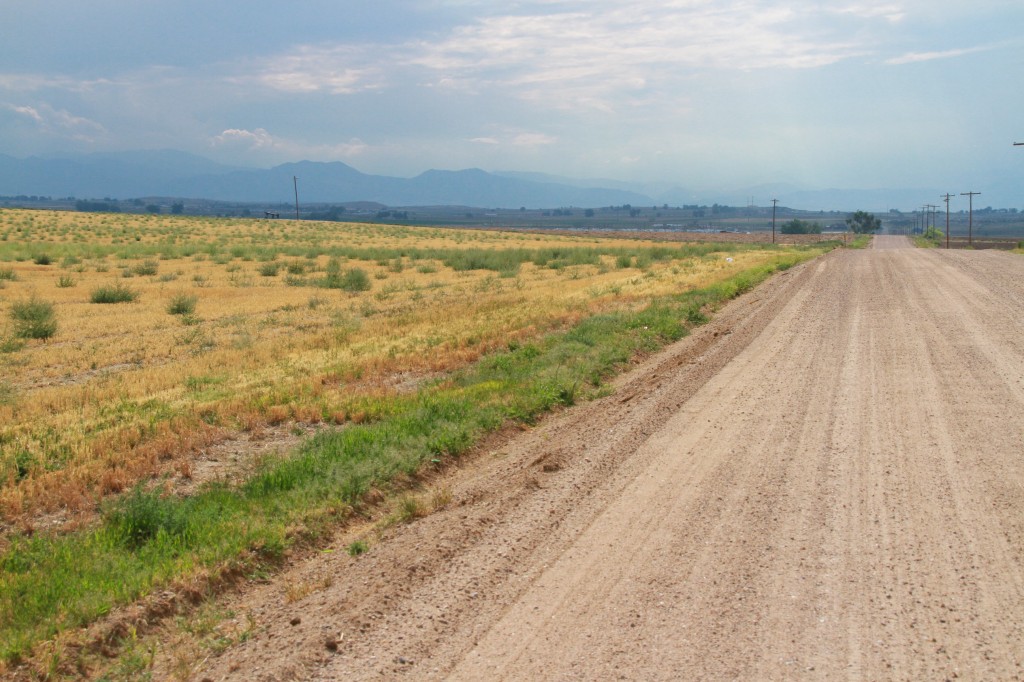 To see them from 40, then 30, and now 20 miles away fills me with excitement, horror, and a strange and entrancing resolve. I don’t want to take my eyes off of them, for fear that they will slip away as a mirage. I feel obsessed, called to the rolling and undulating line of their ridges, the subtle layers of the more distant peaks towering in shrouded light beyond the Front Range. I have never wanted to sit in one place with my camera so much. I could spend years watching the light and sky play around those peaks.

Tonight, we are staying with a kind soul named Kelly. Kelly found out about us through Linny Kenney, whose coast-to-coast ride she followed last year. Linny shared our blog, Kelly found it, and here we are. Her home overlooks the Range – she said on a clear day, she can see clear to the top of the Continental Divide. 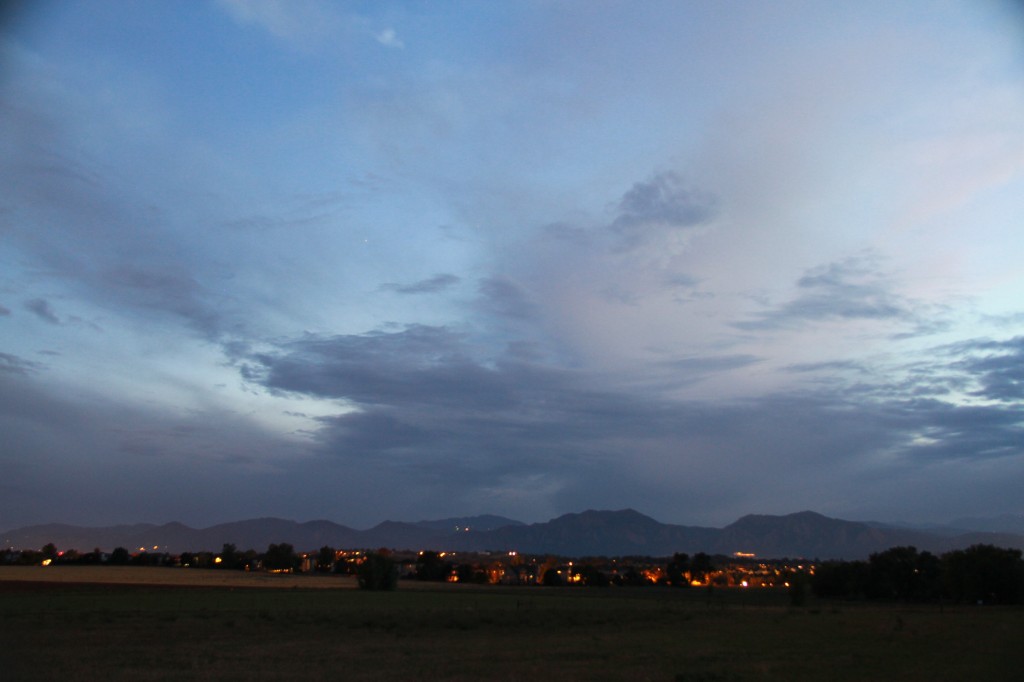 The view from Kelly's home. not too shabby.

Tomorrow, we have a short walk to Boulder, where we begin a whirlwind week on the Front range. We will be visiting friends and family in Boulder, Fort Collins, and Denver, as well as going on therapy visits and reaching out to press for support. It is time for a much-needed break and a chance to catch our breath before we start up into the Rockies.

11 Responses to Ghosts on the Horizon