down and to the West

So much is happening! But there is so little time to write and shuffle through photos and type on tiny keyboards.

From Vail Pass (about 10,600′ above sea level) we walked down and down and down into the Vail valley, world-famous for its unparalleled ski slopes and backcountry trails. 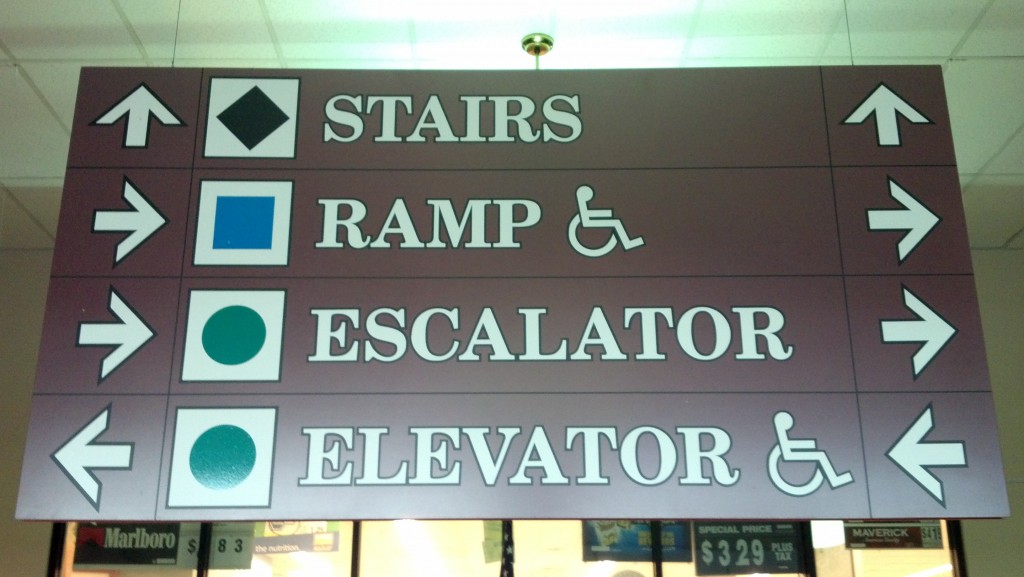 inside the Vail City Market.

As Kait and I made our way down the frontage road alongside I-70, a jogger came working his way up the valley. As he approached, we watched him read the sign on the front of our pushcart. He smiled wide and looked at us, and started clapping. “Great job, keep going!” -and he was gone, pushing up and past us. It was such a genuine and spontaneous show of support, and we were beaming all the way down the valley. Just before the frontage road ended and turned into a bike path, a woman walked out of her house, apparently looking for us. Her husband – the jogger – had called her and told her to go outside and look for us. She gave us delicious beet muffins (made with produce grown in the Vail community garden) and as we were talking the jogger came jogging back. After filling them in on what we are doing, they wished us luck and offered to let us stay in their home if we needed a place for the night. We did. They fed us (very, very well) and treated us like family, while our ridiculous pack of dogs played with their good boy, Goose. They told us to come back if we ever pass through Vail again. 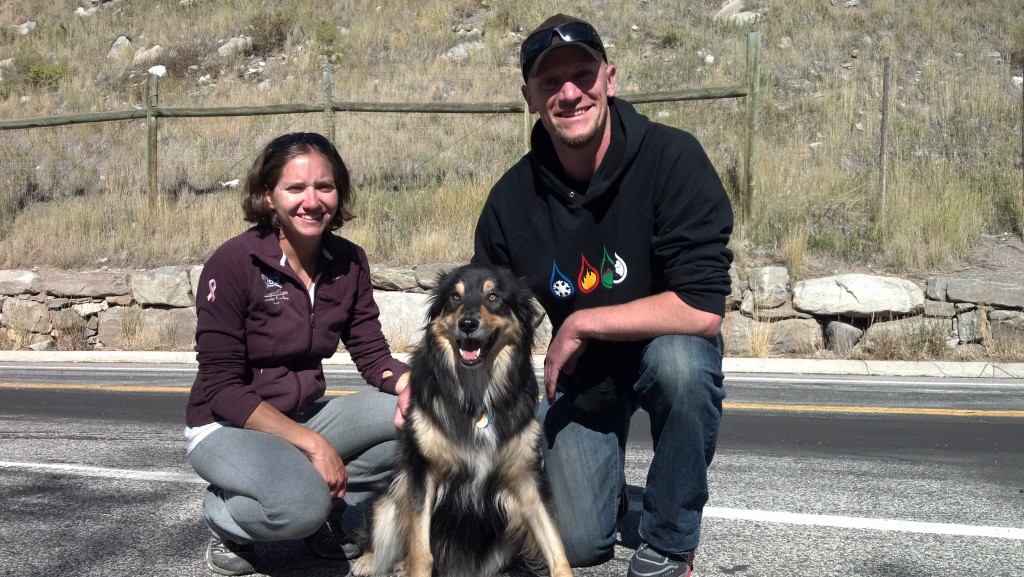 And down and down we walked forever, Passing through Edward and Eagle-Vail and Avon, dropping down toward 6000′. We stopped and gave an interview to the Vail Daily, and at lunch at the dog-friendly farmer’s market In Edwards. We walked further down, into Gypsum, where we met The Brettas – Kelly and Derrick, and their daughter, Sarah. Kelly had seen us walking, and then passed us again – I saw her scrutinize our sign as she drove by. When we walked by her driveway, she was waiting with Sarah to see what we were up to. We hung out with them in their backyard (they have a trampoline suspended over their little creek) and the dogs romped with their pup, Cici. 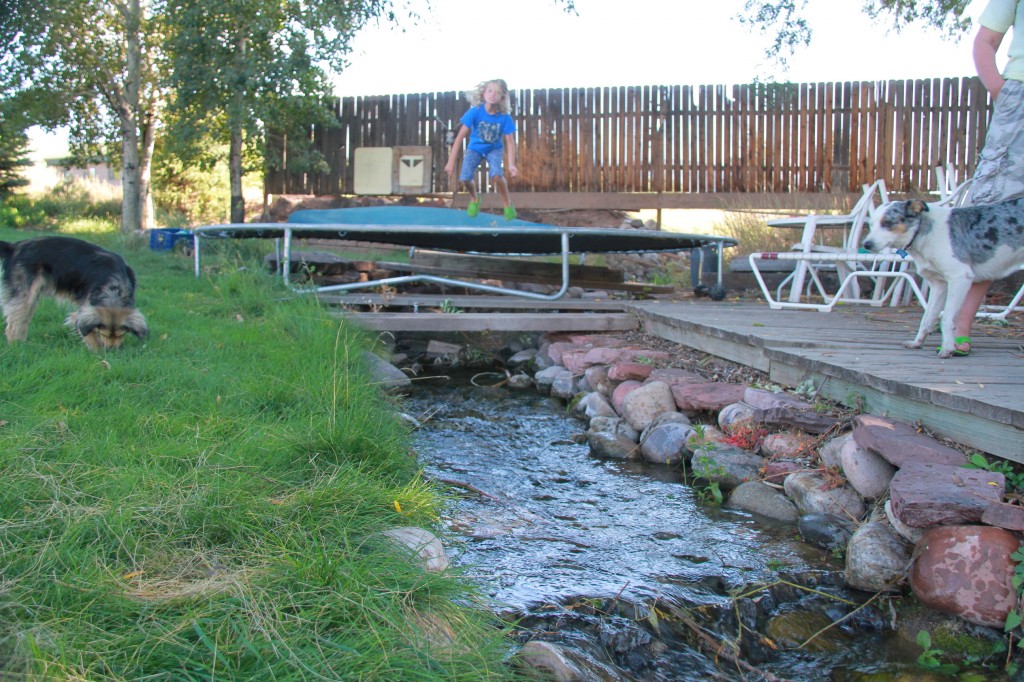 I want one of these.

They talked us into coming back for Antelope tenderloin that night, and Derrick and Sarah joined us for the last 8 miles of our walk that day. Along the way, Derrick told us stories about hiking and hunting, and the geography and geology of the breathtaking landscape. 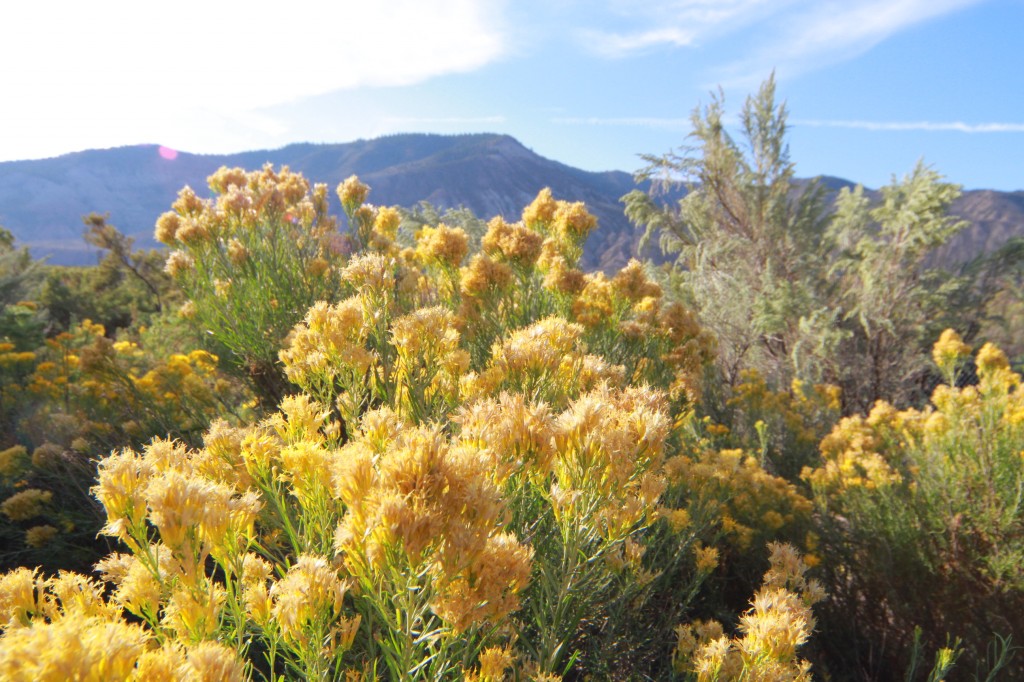 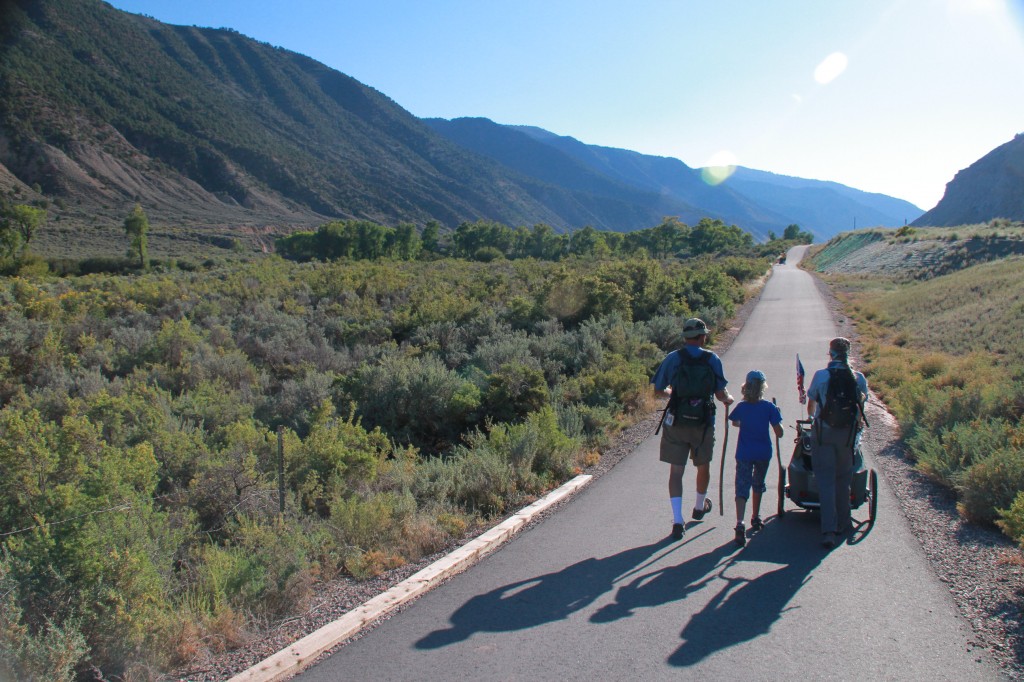 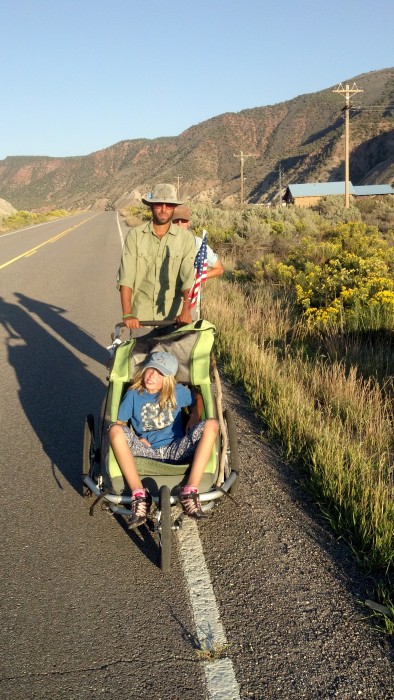 First time we actually got to push a person in the pushcart!

We stopped just shy of the Colorado River, and returned to their house for the night. The antelope was delicious. I want to eat a lot more of it, so I will have to learn to hunt. They also have an outside shower in their secluded backyard. Kait described her experience as “lifechanging.” 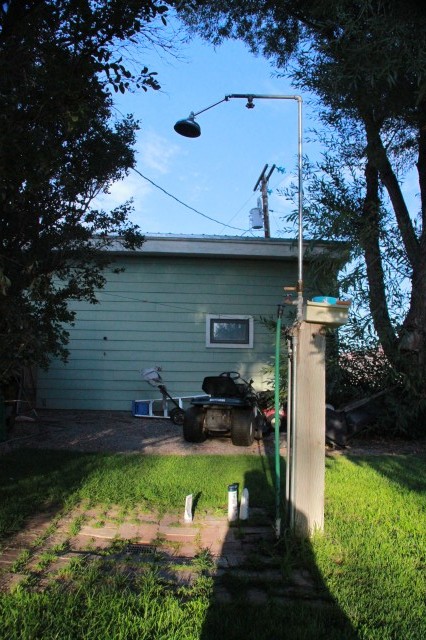 the outside shower. It was cold, if you ask me.

We moved on in the morning and followed the Colorado River through Glenwood Canyon, which turned out to be some of the most beautiful 17 miles we have walked on this entire beautiful walk. The Colorado River carved this canyon out, leaving behind towering walls of rock and sandy soil, layer upon layer slowly sculpted by water and wind and time. 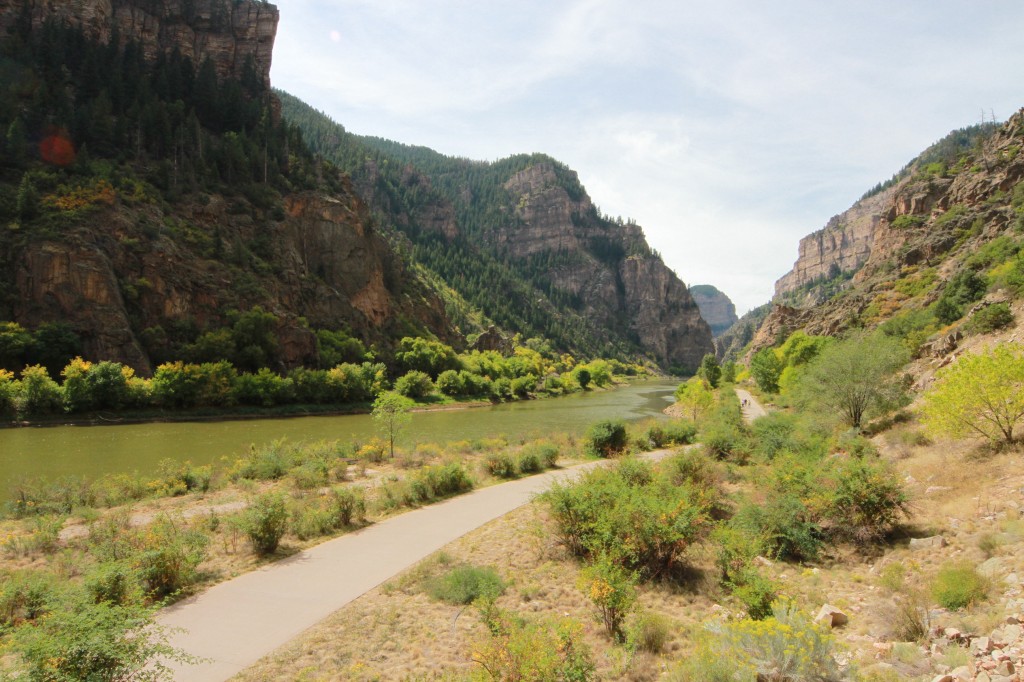 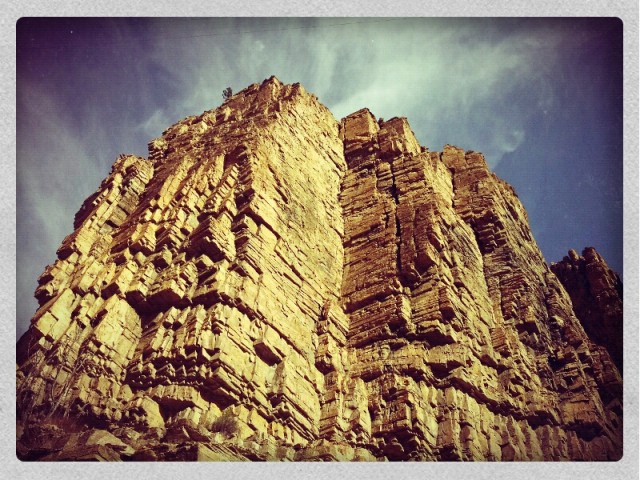 I feel silly using these cameraphone filters, but this is exactly what this rock looked like.

The ancient canyon walls crumbled their slow crumble above us as we followed the curving river on a paved bike path, weaving back and forth underneath I-70. Even the Interstate itself was a breathtaking part of the environment – a smooth, supple line of best fit across the winding canyon floor, with a flowing rush to match the gentle roar of the Colorado. 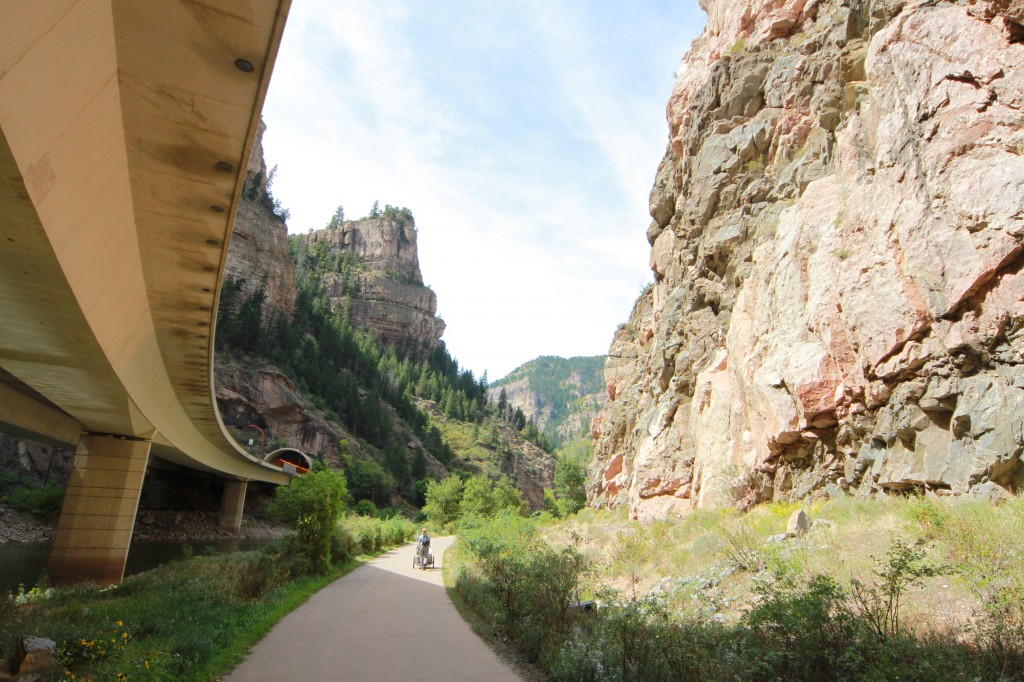 We followed the bike path all the way to the far end of the canyon, where Glenwood Springs rests in a valley. Max braved the mighty Colorado, not once, but three times, to cool off and chase sticks. He’s my hero. We love traveling with moving water. The flow connects us to our surroundings in such an immersive way – the sounds and smells, the utility and comfort of a river. Kait and I want to kayak down the Colorado someday. We think it would be fun. 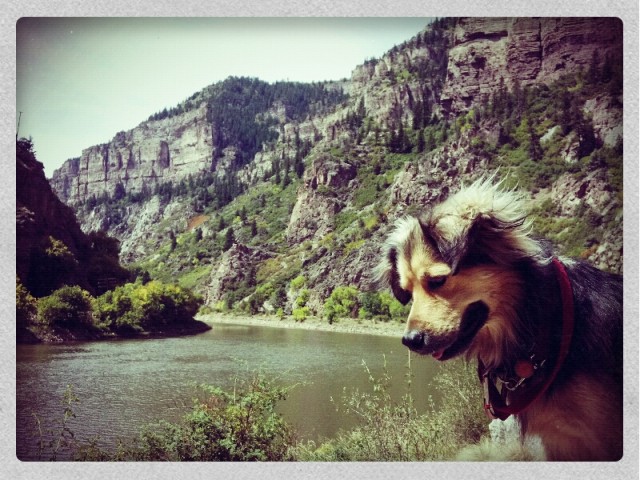 We reached Glenwood Springs and, with no budget to stay at the natural hot springs spa and hotel, we found our way to the Glenwood Springs Hostel. The owner put us up for half price, and led the way through the mazelike house, through a courtyard and into a completely different mazelike house, where we eventually found our clean, tiny (but half price!) room. It was my first time in a hostel, and I wish I hadn’t been so wiped out. The house was full of interesting people, and I wanted to meet them and cook breakfast with them and do dishes with them, but I was too tired. Kait passed out post haste. Jon and I met a hiker named Rob, who took an interest in our project. In the half-lidded stupor of half past hiker’s midnight, he expressed and interest in joining us on our walk – at least as far as Grand Junction. We all slept on it.

In the morning we headed to Creekside Assisted Living with the dogs. It was our first therapy visit since leaving Denver, and it was an easy visit with a small group of residents. The people who live there were hospitable and really soaked up the dogs. It was a quiet morning – the power was out, and it was raining a little, and they said our visit really brightened their day. 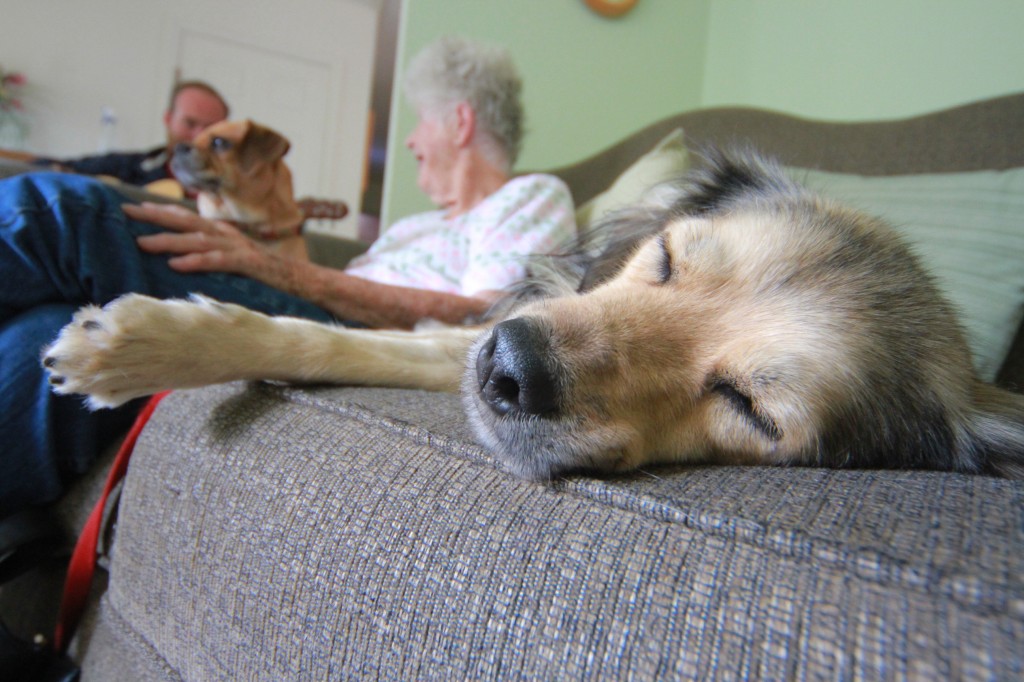 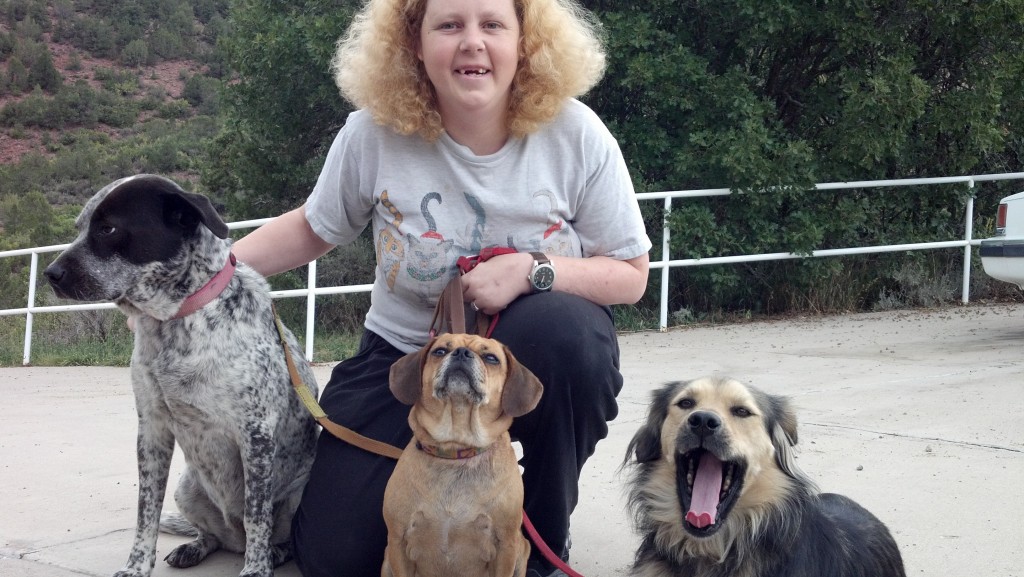 We stopped back by the hostel on our way out of town to pick up Rob – I’ll tell you about him later – and picked up walking along a gnarly stretch of grass and shrubs outside of the guardrail of I-70. In the rain. It was fun. The Colorado flowed on and on below us – frothy and rough because of the low water level this year – while we picked our way along a fairly well-traveled footpath through the foliage. The mountains started to spread apart, and as the valley widened it filled up with beautiful farms and horse ranches, great swaths of green between the red cliffs and peaks. 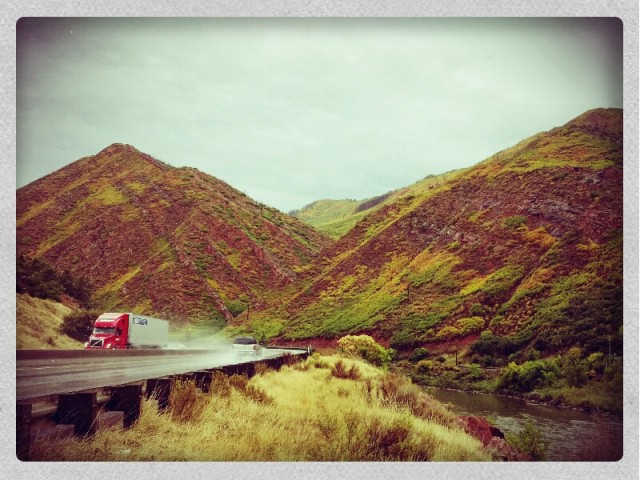 The last few days have been a blur. Through New Castle and Silt, we walked along the river valley to Rifle. We camped outside of the city, and in the morning we spruced up and went to the Colorado State Veteran’s Home for a therapy visit. The staff are really sweet, and they led us around to common areas and rooms to meet the residents. Many strong handshakes and belly rubs were exchanged. One man was in his room, listening to old radio shows on cassettes. He greeted us kindly and went to work petting the dogs, asking questions about them and about our walk. When we got up to move on to the next room, said, “Thank You for coming, you really made my day.” and that made my day. 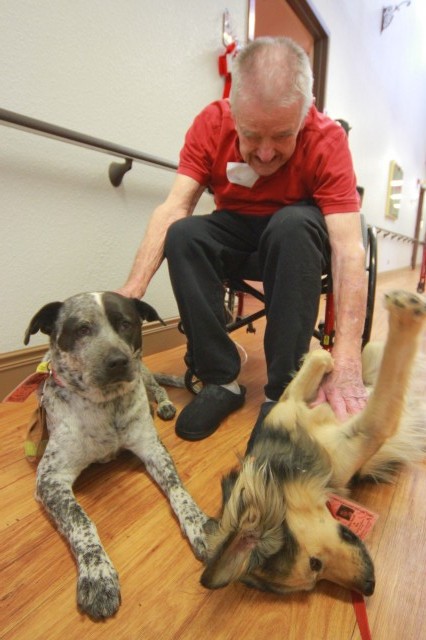 at the Rifle VA.

Things are definitely starting to look much more…Western. The shapes of the hillsides, and mountains in the distance, the very rock that forms the monoliths is changing in texture and color. As the mountains morph into canyons, the changes in line and nuance of the peaks ridgelines, silhouetted against the multicolored sky, makes me want to trace them all in ink. I will make time, sometime. 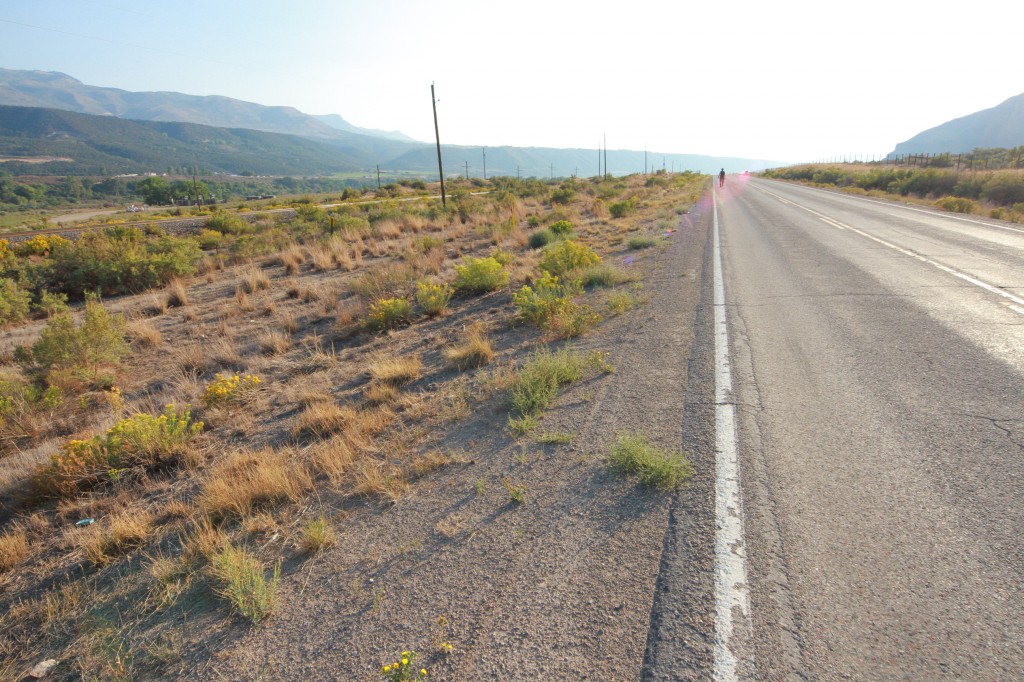 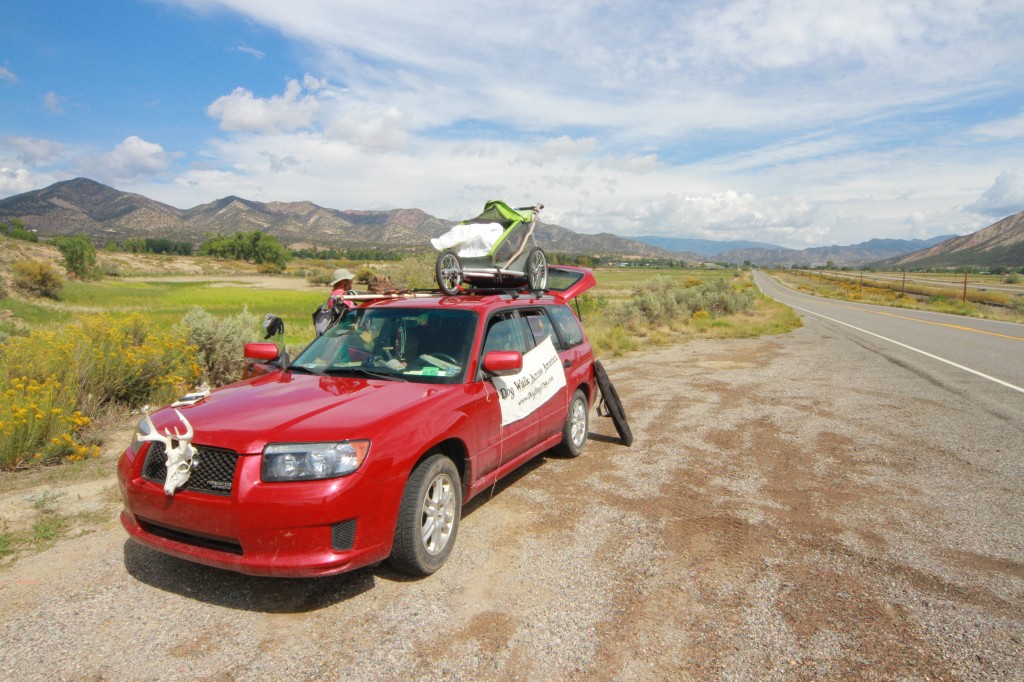 even out here, our support car looks weird. 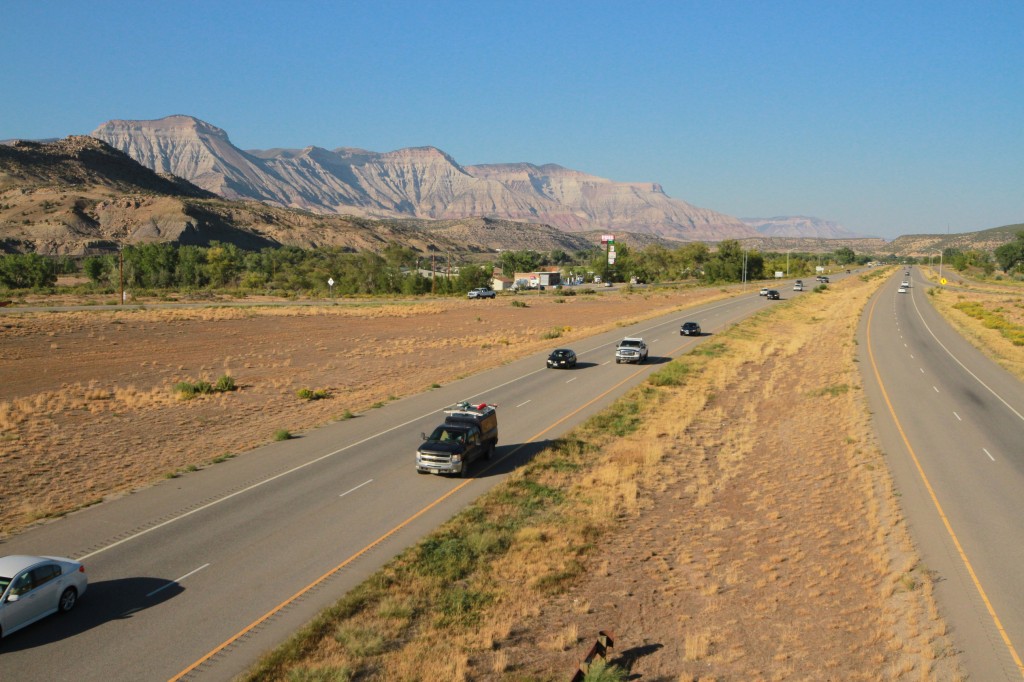 We are a few short days from Grand Junction, where we have a therapy visit scheduled at the VA Center. From there, we will head into Utah and start to cut southwest toward Las Vegas. We need to look at the map. 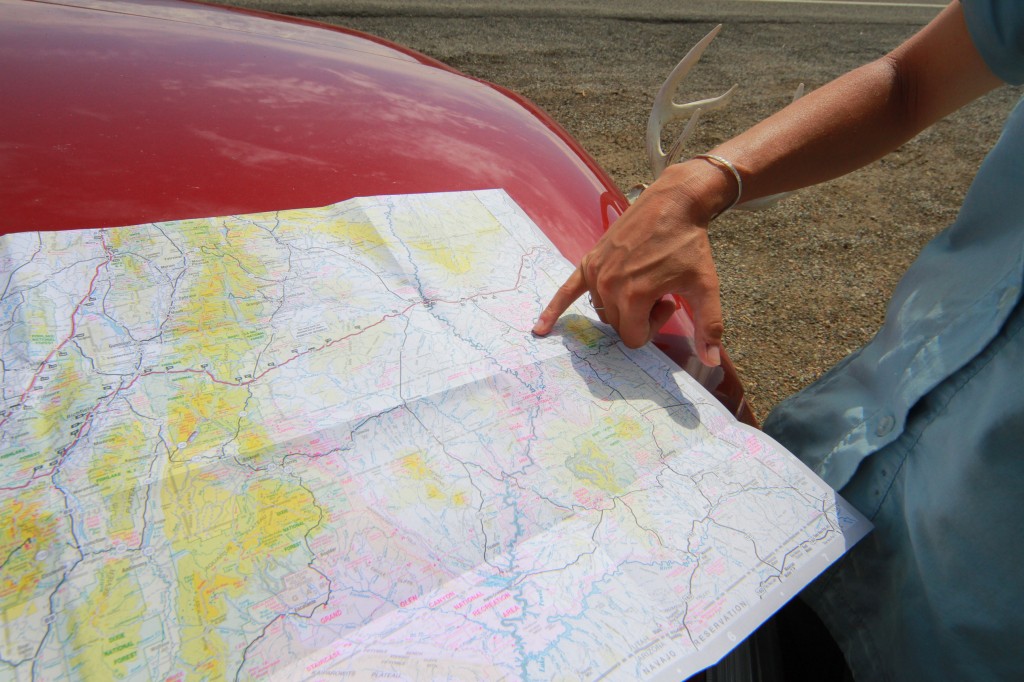 4 Responses to down and to the West