California sunrise and the ghost of Vegas past 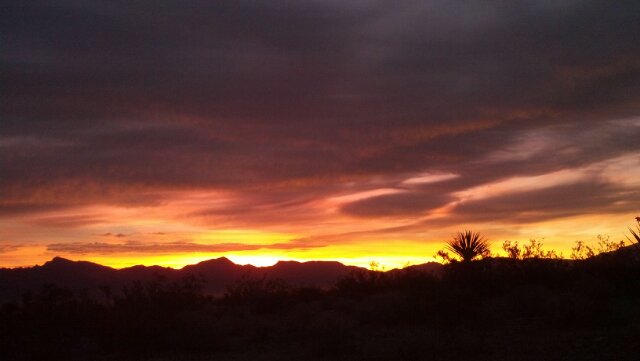 I am troubled on our first morning in California. We woke to a fiery sunrise from the east, coming up over the far side of Sandy Valley. It reminded me of the way those mountains looked last night, glowing in the backlit etheral light cast by Las Vegas, now fading quickly into the distance behind us.

In the twilight haze and my haste to write about our time in that strange place, I forgot many a detail. I think that few tourists see much of the city outside the relatively safe bubble of the strip; but walking through it end-to-end, we saw what life is like for those that don’t live under the glow of the neon, or behind the friendly gates and guardhouses that insulate the nicer neighborhoods to the west. I was so struck by the sight of the depths of poverty cast aside just beyond the edge of the opulent, extravagant, indulgent glow, that I was blinded to the positive energy we were lucky to share.

We met Marcia and Glenn (sorry I didn’t get a picture of you,) fellow animal lovers and rescuers of dogs in need, out for lunch. They adopted Randall LaRue from Camelot Puppy Sanctuary (his story is a little ways down on their website) which makes him cousins with Max and Grace. While Glenn and Marcia have never met Stephanie face-to-face, they remain in close contact. We were happy to shed some light on the positive force of all things good and doggy that is Stephanie and Camelot.

Over lunch, Marcia told us of her own brand of community service: She writes letters (from her dogs) to inmates in prison that have no family, no other form of correspondence. While a letter from a dog sounded goofy at first, she told us that the inmates often write back, telling their own stories and warning the dogs to behave so they don’t end up in the pen. For people with little else to look forward to, Marcia’s letters must be a ray of sunshine. Thanks again for the food and inspiring conversation, kids.

And of course, how could I forget to talk about my own family? They took time away from their lives to see us – not Vegas – out on the road. My dad cashed in his vacation time to make the flight, and my brother put his job search on hold to be with us for few short days. We got to live like civilized folk for a few days, take in the sights and eat food we couldn’t have afforded ourselves. It was a valuable moment of rest and comfort in an otherwise hectic and inhospitable city.
To family and friends, we owe you an enormous and infinite Thank You for supporting us in this absurd adventure. Now, if you’ll excuse me, we have an ocean to catch.

4 Responses to California sunrise and the ghost of Vegas past