Tyler quit his job this year to walk across America. He was working as a well-paid corporate lawyer in Chicago, but he wasn’t happy. He decided he would be much happier hiking across the country with his dog, Mabel. He sent an email to his entire address book, announcing his resignation, and the response was overwhelming. Many fellow lawyers praised him, supporting his decision. Many of his colleagues described themselves as trapped – by work, bills, the responsibility of supporting a family.  The attorney hivemind seemed to say, loud and clear: “You’re free – RUN.” 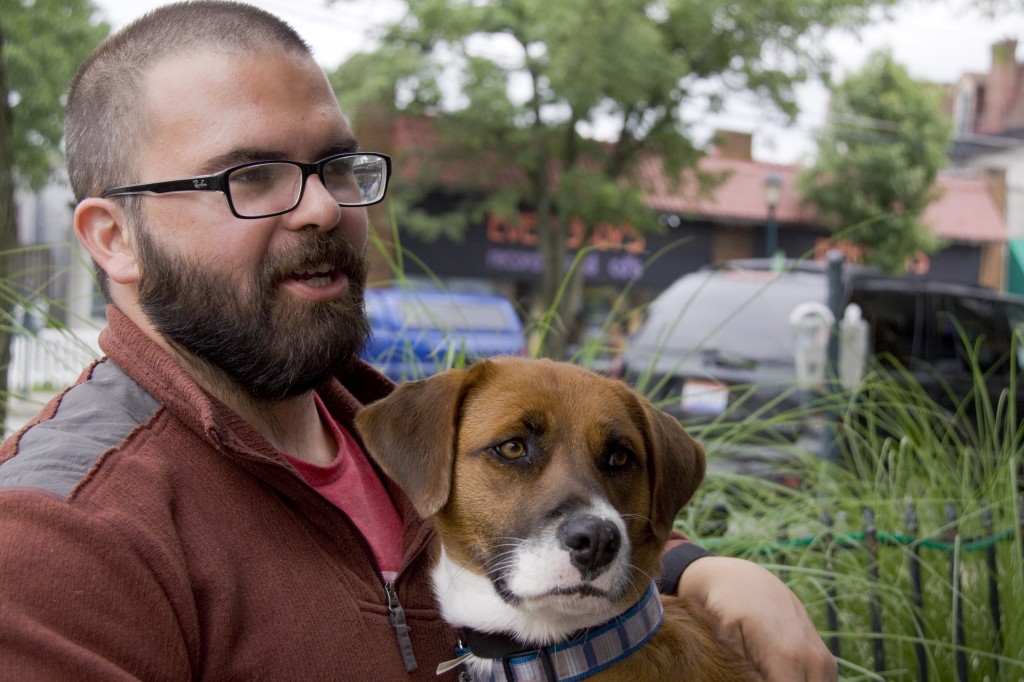 After I saw his story, “Want out of Biglaw? Take a Hike!” linked on reddit.com, we got ahold of him and drove up to Cincinnati to meet him for lunch. A friend from Chicago, Heidi Jugenitz, had just driven down to meet Tyler to walk across Indiana with him.  Like Tyler, she was looking to take some time to connect with herself and her country for a little while.  The contrast between the two travelers was fascinating.  Tyler had already been on the road for a few months and Heidi was just about to get started.  She barely had a concept of what she had signed on for and she knew it, but her energy and motivation were palpable.

Tyler had a rough start on his journey. He began the second week in March, about 2 weeks behind schedule, on The American Discovery Trail.  His first day, he got tangled in Mabel’s leash and took a hard fall. His pack weighed a whopping 90lbs when he began, and all of that weight came down on top of him – injuries occurred. He has since shed all but the most essential of items, ditching creature comforts (like his camp stove) along the way.  His pack now weighs closer to 50 lbs.

Because of his timing, he got caught in torrential downpours, tornado warnings, and other assorted severe weather across all of Ohio this May and it put him close to a month behind schedule by his estimation. It is interesting to note that another trekker, Nate Damm (http://www.natewalksamerica.com) also left from Delaware on the American Discovery Trail two weeks ahead of Tyler. Fortunately for him, the weather worked out in his favor and he made great time through the Midwest. Tyler planned to cross the Rockies this summer, but there is a very narrow window of time – July and August – to cross without the risk of getting caught in the winter snows. We must take this into careful consideration when planning our route.

Tyler has met many people in his travels. As with the other trekkers we have met, he was full of stories of people’s kindness and generosity out on the road. People went out of their way to help him, simply because he was traveling.

Tyler was also very frank with us about the darker side of people he had seen. He learned to trust his instincts and avoid situations that made him uncomfortable. Going through isolated areas, he kept getting turned away from motels, time after time. Eventually a stranger told him that many of the off-the-beaten-path motels are really fronts for prostitution and drug dealing, and they won’t even rent a room to a traveler. These are the places you won’t find rated on Travelocity.

Tyler talked a lot about the other trekkers he has met along his path. He described three general categories: The Solo Through-Hiker, the Featherlite Through-Hiker, and the Supported Through-Hiker. Tyler himself is a solo-hiker, carrying (and now wheeling) his supplies by his own power.  He has no support vehicle.  He has only himself, Mabel, a smart phone, the occasional company of a friend like Heidi, and the people he meets along the way.

With our support vehicle following us with most of our food and water, Kait and I fall into the “supported hiker” category. According to Tyler, supported hikers tend to have the most enjoyable experience. I think about how it would be possible to make it safely without the vehicle, but it would add substantial risk to the safety of the dogs. He insisted on the value of getting a good smart phone and paying the bill. He also recommended we invest in silk boot liners to cut down on blisters.

#1 piece of advice from Tyler?  “The most important thing is planning for water.” Everything else is secondary to water. 3 gallons of water weighs 26 lbs. If our goal is to limit pack wight to 50 lbs, water is half of that. Plan wisely.

Additional articles about Tyler and Mabel: