On February 26, 2011, Nate Damm left Lewes, Delaware on the American Discovery Trail to walk across America.  Why?  Because he wanted to. The idea had spent many months running laps in his head and refused to go away.  Even after waiting it out a few months to test his seriousness about it, it was still there, patiently waiting.  So in the summer of 2010, he decided to go for it and made plans to depart at the end of winter.

John and I learned about Nate from Tyler Coulson when we met up with him in Cincinnati during his 2011 cross country trek.  Nate and Tyler departed from the same place only a couple weeks apart.  Though they still have never met, they communicated and supported each other via text message throughout their respective walks. We spent the next six months following Tyler on his website, TylerCoulson.com and then Nate on his website Nate Walks America. 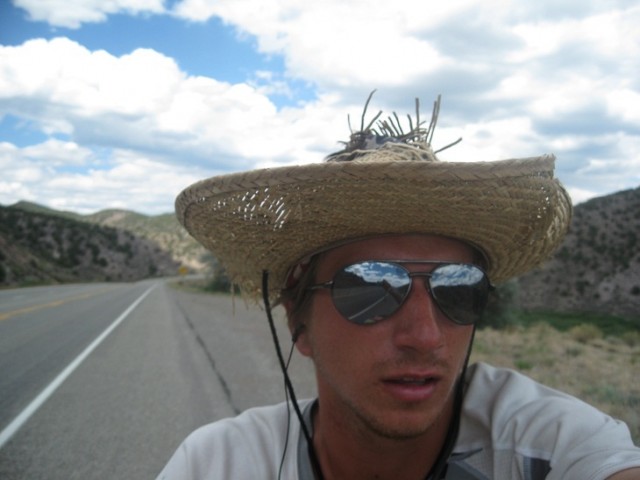 Nate, somewhere in Colorado during his walk

Throughout his walk, Nate posted writings, photos, videos, and stories of his experiences on the road.  He gave us the opportunity to experience his trip vicariously while we were in the process of planning our own.  Though we could not fully comprehend what we were about to experience, it was nice to have some understanding of what we were taking on.  While planning, John and I were able to communicate with Nate and ask him endless questions about his experience walking across America.  He was patient, kind, and honest, and graciously filled us in on whatever we wanted to know.

On the first day, only three miles from the Atlantic Ocean, we stopped for lunch.  We were already tired, sore, and completely overloaded with gear.  We were marveling at the immensity of the challenge we had taken on when John’s phone rang. It was Nate, calling to check on us.

“You started today, didn’t you?  Do you know where you’re sleeping tonight?” he asked. We didn’t. He told us that he stayed with a wonderful family 15 miles into his walk. He said that they really set the tone for his walk, and he had already called ahead and told them about us. He gave us Serenda Conner’s phone number and said that she was expecting us.  Only three miles into our walk and we had already been provided a place to stay for our first night.

Nate provided the first trail magic of our trip by getting us in touch with the amazing Conner family.  Thanks to Nate and his efforts to share his journey and experiences with others through his blog and generous advice, we took our first steps with faith and hope that all things would come together if we just stuck with it and kept a positive attitude.

Nate finished his trek in San Francisco with a walk over the Golden Gate Bridge in October of 2011.  It took him six and a half months of walking time, spread over seven and a half months.  Shortly after, he returned to his home state of Maine with plans to continue traveling and writing.

Since his walk, he has posted many of his writings on his new website NateDamm.com and even taken the time to help others as he helped John and I by writing his guide to walking across America.  This guide addresses many of the questions that we and many others like us have about planning a cross-country walk and day to day life on the road.  For Nate’s answers to some deeper questions about his journey, check out his interview with Rogue Priest, Drew Jacob.  Currently, he is traveling, hiking, and writing his book about his walk across America.