After our graduation from Ohio University in June of 2009, the family of friends that Kait and I had found in college quickly began to disband.  The undergraduate chapter of our lives had ended, and we left Athens one by one to pursue our passions and find our own paths through the world. 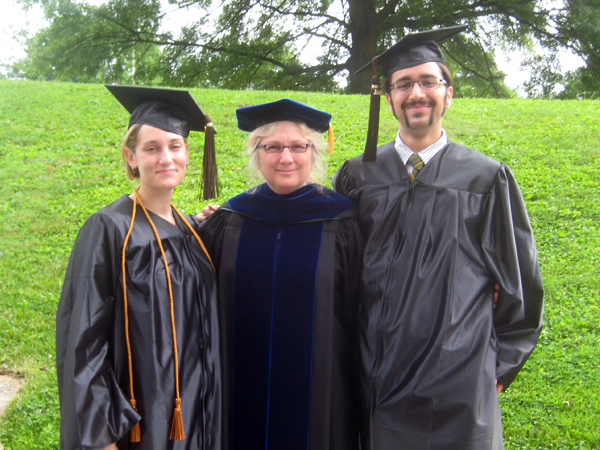 While many of my friends moved a short distance to Columbus, OH, others traveled far and wide.  Sergey – who once ran for Mayor of Athens, OH – left to teach English to children in Vietnam, and is now breaking out as a talented travel photojournalist (here is his website.)  Mike moved to Puerto Rico for awhile, then bounced around between Florida, North Carolina, Ohio, Colorado, and California.  Scott got married and moved to New Mexico.  Tony – one of the most positive, upbeat people that I have ever known – moved out to San Francisco to pursue his dream of making video games. 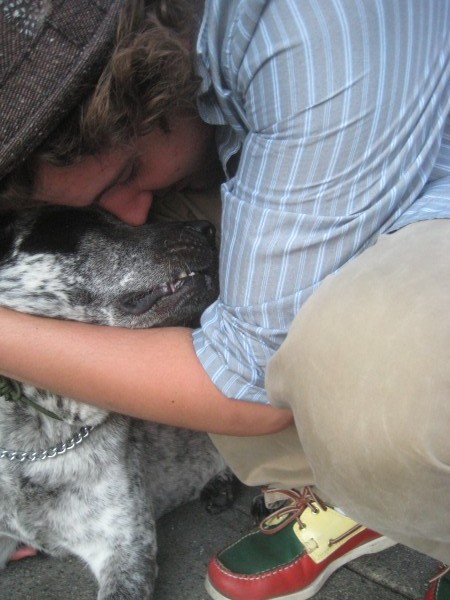 With our friends scattering in all directions, it didn’t take long for Kait and I to start planning a road trip to visit some of our favorite people.  Since so many of our friends made the move to the West Coast (and because Vietnam is really far away) we set our sights on San Francisco.  I traveled with my family a lot as a child, but most of my memories are of flying to new places.  There is a real sense of displacement and depersonalization that comes with traveling in such a way.  I never really felt engaged in the places I visited, and it left me wanting more from my travels.   I wanted to be on the ground, to travel THROUGH the country – not over it or around it.   I wanted to feel the dirt, taste the air, and meet the people in the new places I explored.

From the beginning, bringing the dogs on this adventure was a given.  Even though I had only had Max for a couple of short months, it never crossed my mind to NOT include him in the trip.  Of COURSE the dogs are coming – why wouldn’t they?  They were already used to many shorter road trips, as we visited family in Kentucky and New York as often as possible.  They were in the habit of napping in the car, and exploring new places every time we stopped.  Our good friend, Amber, signed on to be our third wheel for the adventure.  Although it was a little crowded with three people and two dogs, we figured out how to fit all of our camping and traveling gear in the car, and still have a comfy back seat for dogs and the third human passenger (we took turns in the back seat, which we dubbed the “nap station.) 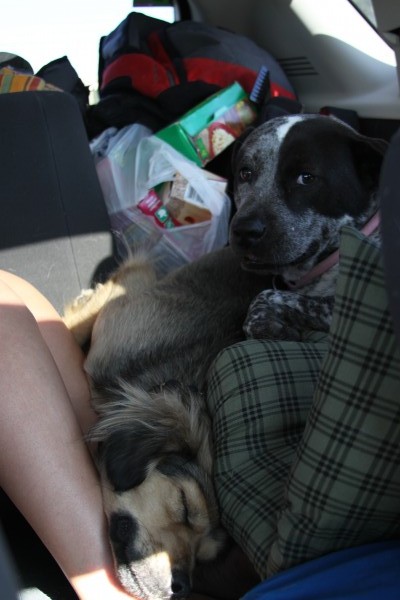 From left to right: Amber, Max, and Grace - cozy, indeed.

We had two weeks to travel, and we decided that making good time to San Francisco was our first priority.  Once we were there, we could improvise and take our time wandering back home.  We roared across the Midwest, through ominous Illinois weather fronts, past the endless Iowa fields of big-aggro corn and soybeans, and found our way out into “Cowboy Country.”  Every state seemed to have a clearly defined border – a body of water, or a change in scenery and flora.  We hardly needed signs to tell us when we crossed from one state to another.  I remember when the rolling corn fields of Nebraska quite suddenly gave way to the rocky beige scrubland of Wyoming.  Even the dogs seemed to sense this deliniation of space, and at every state line they would wake up like clockwork to sniff at the new air rushing by the open window.

The further West we traveled, the more I found myself in awe of the beauty and magnitude of this continent.  No wonder indigenous populations thrived here long before modern technology and medicine, as they had access to one of the most diverse and plentiful lands on this planet.  I think it was the first time I felt proud to be an American in many years – proud to live in such a blessed and beautiful place, a place worth fighting for and protecting.  My sense of Home and origin began to shift as well, right around a pit stop we made near the Western edge of Wyoming.  A little boy who told me stories of gopher hunting asked where we had come from, and searching for a simple answer (am I from Kentucky? Ohio? Pennsylvania? I’m still not sure) I replied that we came from “back East.”  His mother later took me aside and asked me where I meant, because “‘back East’ doesn’t mean much to a kid who’s never left Wyoming.” 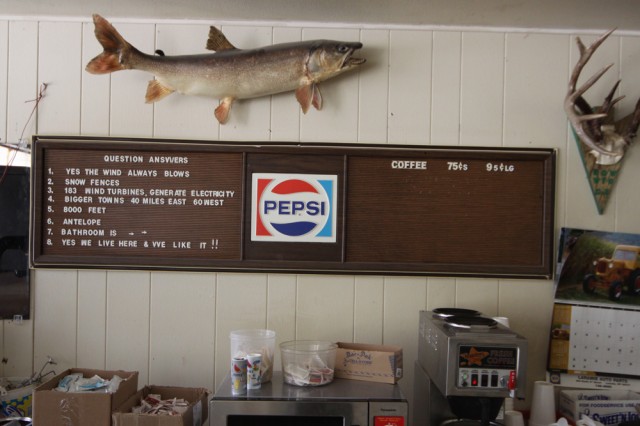 After camping at a KOA in downtown Salt Lake City – I could hear the bus stop just a few feet beyond the privacy fence, outside my tent – we crossed the Salt Flats and listened to Band of Horses as we passed the Great Salt Lake.  We pulled right off the highway onto the Flats and walked on the surface of that strange moon.  We could see tire tracks everywhere, stretching off into the distance – but I ran in bare feet, with Max at my heels. 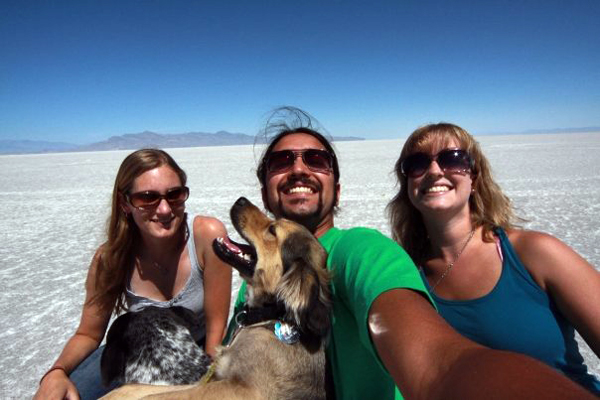 Out on the salt flats, we tasted the earth.

We bombed West across the desert of Nevada.  For the full effect, we rolled the windows down and let the waves of heat and sun roll through our car, filling it with the smell of empty space, the open expanse, the dry desert flavor of “nobody lives here.”  We made Donner Pass by nightfall and rolled into San Francisco with an insatiable hunger for all things New. 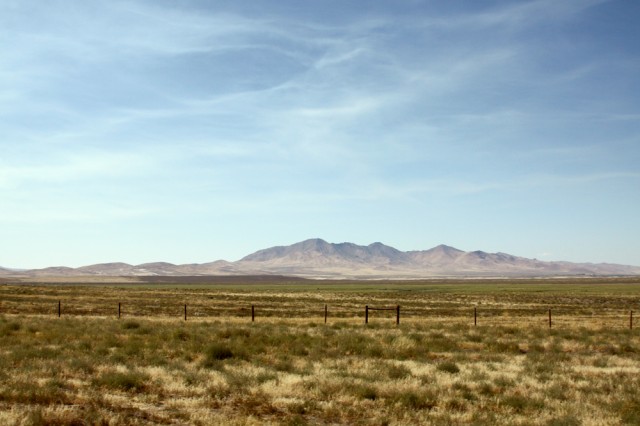 We spent several days in the Bay area, walking through Golden Gate Park and soaking up the colorful vibes of the city.  At the time, Tony was living quite literally on the corner of Haight and Ashbury – ground zero of the 1960’s Acid Wave and the Love Generation.  Everywhere we looked, artists were hard at work, freaking people out in fresh and astounding ways.  On every street corner and in every sunny spot of the park, people were bursting with creativity. 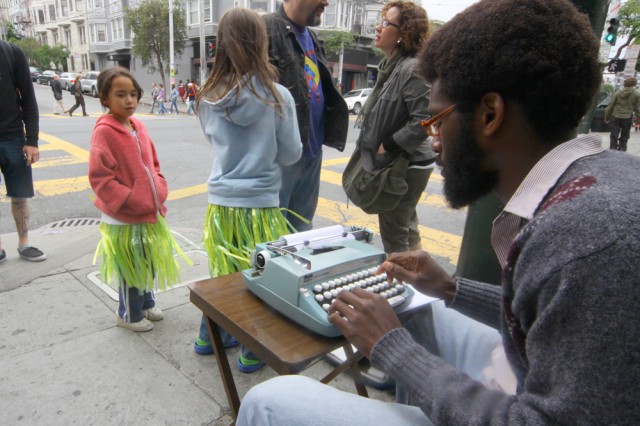 "Pick a subject and a price, then get a poem"

In our brief time in the Haight, we were mistaken for locals on more than one occasion.  Once, I left Kait outside with the dogs so I could grab us some lunch.  When I returned, she had been descended upon by German tourists, all clamoring for pictures of the indigenous hippies and their dogs – a man literally had my dog in a headlock, no doubt snapping a new self-portrait for his profile pic.  It was surreal, to say the least. 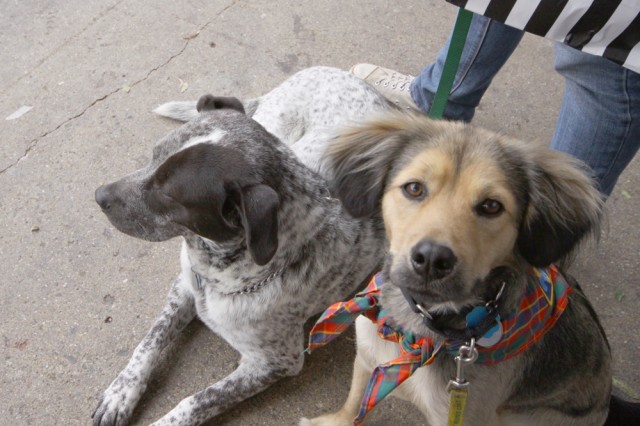 After a few days we had to say goodbye to Tony and return to the road.  We had decided to drive South and travel East by way of the Grand Canyon.  We drove all day through a strange land of golden rolling hills, wind farms, asphalt truck stop expanses, and pushed straight through the night.  We passed through Barstow, on the edge of the desert, around midnight and turned to head East into Arizona.  As we pulled into Grand Canyon National Park, the sun was just coming over the horizon.  We parked in the empty lot, stretched, and walked right up to the canyon’s edge. 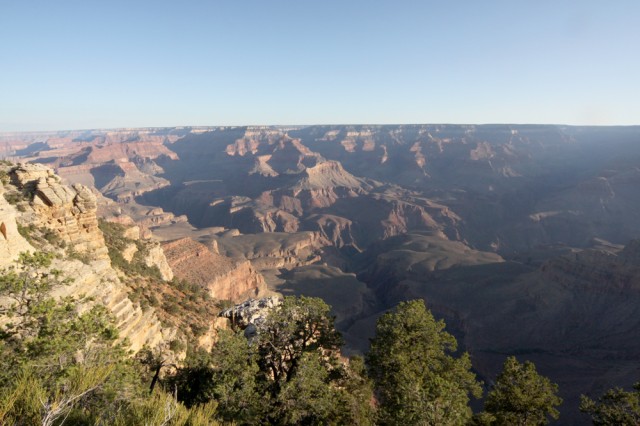 I have heard people describe the Grand Canyon many times, and always hear the same thing: “It’s just so BIG, words really don’t do it justice.  You just have to see it.”  Stepping up to the edge of that precipice, something changed forever in my mind’s eye.  There really is no way to describe the emotional response that I had to seeing this wonder of time and geology, carved out by the Colorado River.  The canyon walls dropped away in flaking layers of rock, revealing 2 billion years of natural history to the casual observer.  Down below us, the canyon’s floor was not dead and dusty as I had expected, but rather alive and vibrant.  In the miles that span the Northern and Southern walls, mountains rose up from a distant land, dug deep into the earth.  Much like staring into the Milky Way on a clear night, looking out over that incomprehensible expanse of Time and Space was a powerful reminder of the brevity of our human narrative.  There are simply no words to describe the beauty of that place.

We spent the day hiking along the Southern Rim of the canyon with the dogs on short leashes.  I was pleasantly surprised by the lack of walls and fences keeping us safe.  Knowing that the only thing keeping me from falling off the edge was placing my feet on the path allowed me to connect with the place intimately.  We didn’t have time to hike down into the canyon, but we noted that although dogs are not allowed below the Rim, the park offers a kennel service for canine companions to wait while their people hike the challenging Canyon floor.  That night, I came back to the edge and stepped off the path the take a few long exposures of the stars over the pitch-black canyon.  As I fumbled with my tripod, i turned my flashlight toward the edge.  I don’t know what I expected to see – maybe a tree halfway down the canyon wall, catching the light – but at the edge of the path, my light simply disappeared into this great, yawning blackness.  It was the most primal moment of fear I have ever experienced – as if I had walked to the very edge of the earth.

We camped the night in Grand Canyon National Park and were back on the road the next morning, heading toward Colorado.  With haste we crossed the painted desert, stopped at Four Corners, and finally pulled into a KOA outside of Mesa Verde National Park.  Almost every night we stopped on the road, we stayed at a KOA campground. Because we don’t mind camping, this was an amazing opportunity to travel on a tight budget.  Each KOA is individually owned and operated, and they all have their own features and amenities.  Regardless of where we stayed, we could count on fresh water, clean bathrooms and showers, a general store of some sort, and helpful staff.  We spent an average of $10 each night we stayed at a campsite – an absolute STEAL for all of the comfort we received.

We spent the night in a teepee, listening to coyotes howl in the distance. 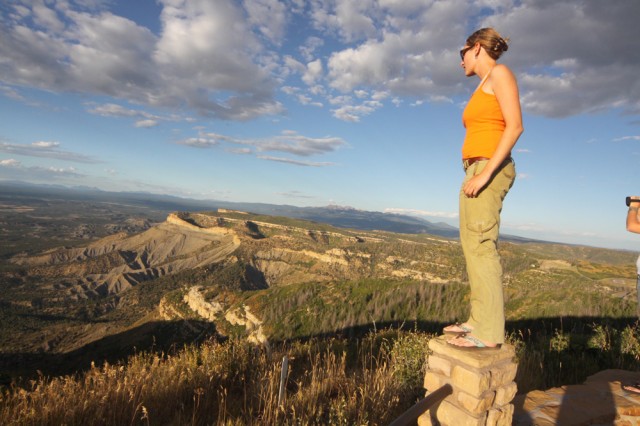 Mesa Verde is an amazing place.  The park is home to hundreds of cliff dwellings that were once inhabited by the Anasazi people.  We only had time to spend one morning there, so we toured Cliff Palace – the largest site.  The sophisticated architecture and planning of the small city was impressive and well-preserved.  It is not well-known why the Anasazi abandoned their cliff dwellings, but they left behind a fascinating record of another time and way of life.  It is a shame we didn’t spend more time there. 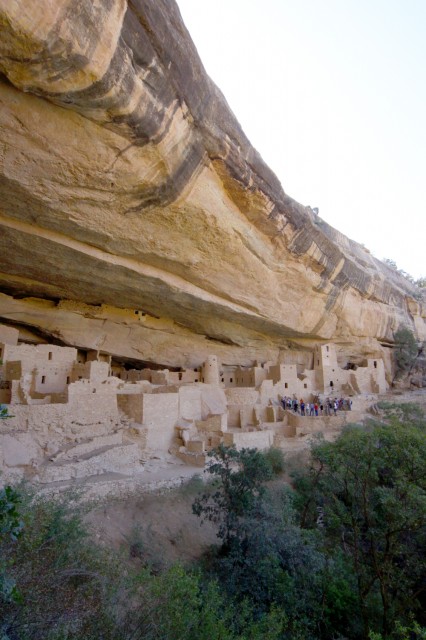 We made our way north through Colorado, weaving through the Rockies.  It was the most terrifying and beautiful day of driving of the whole trip – winding narrow roads and steep grades, and beautiful vistas all around. 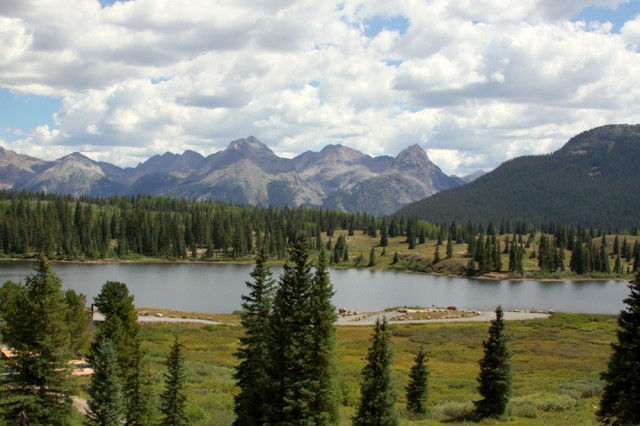 I slept on and off as we made our way back east, across Kansas and Missouri.  As we made our way back into the Midwest, I knew we had much more to see.  Rather than quench my wanderlust, the roadtrip filled me with the desire to travel even more, and spend more time immersing myself in the places I visit. 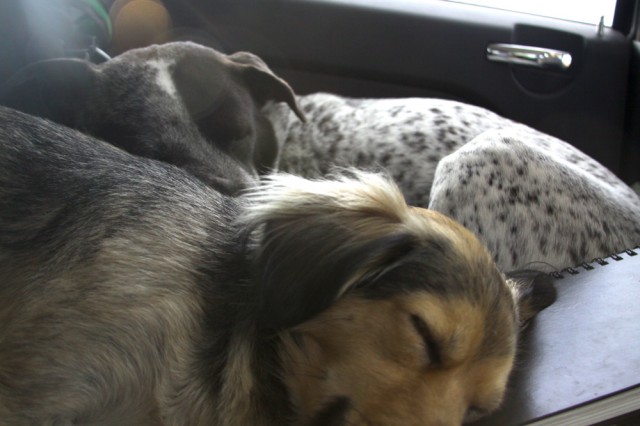 5 Responses to Flashback: San Francisco or Bust, 2009 (with dogs)