walking to the end of the world

Nevada, what can I say? You’re a very strange state of time and space. 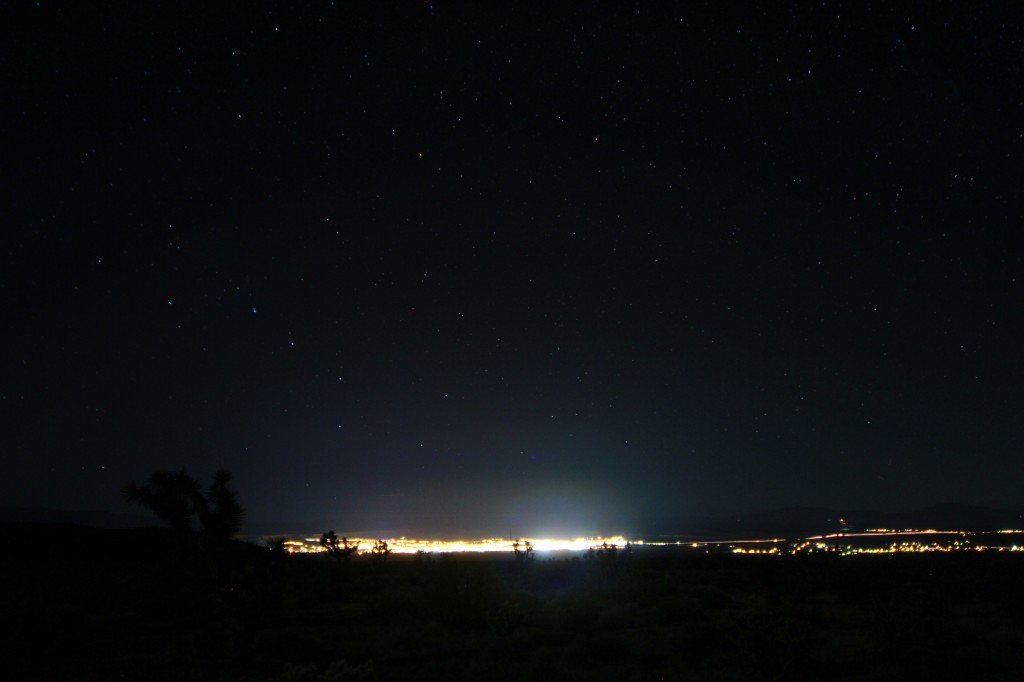 We walked west through Mesquite, out into nothing and more nothing. The Nevada desert stretches on and on, punctuated by mountains and rock forms off in the distance. We crossed the Virgin River, grooved on the surprising amount of water flowing through this barren place, and headed up and out of the river valley following the line of I-15 in the distance. 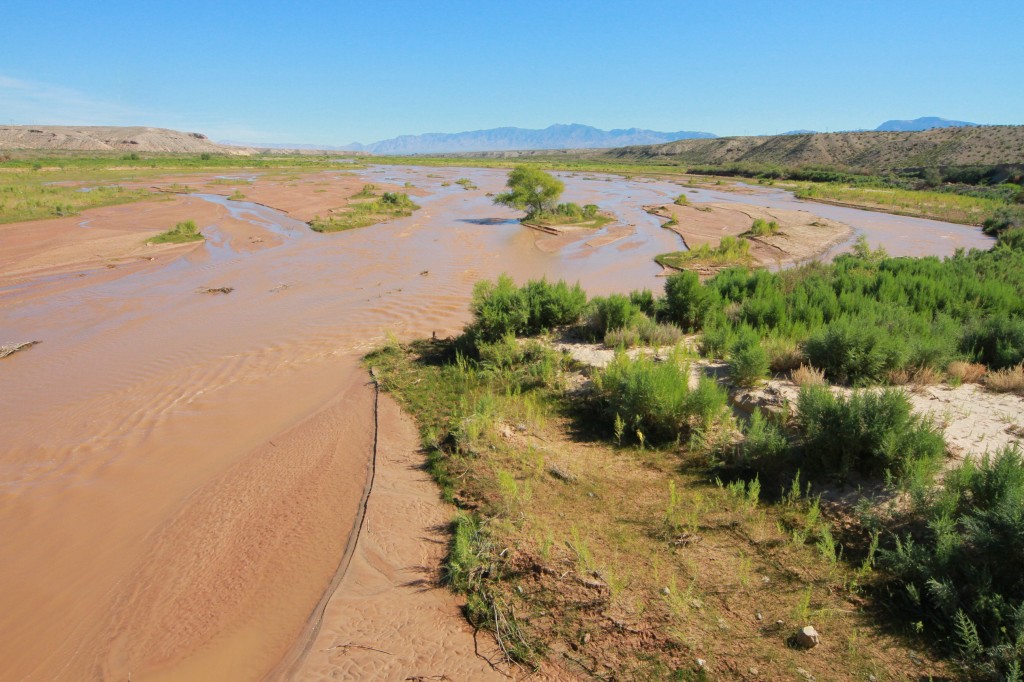 At the guidance of Google, we found ourselves turning onto an unnamed road that took us up the eroded side of a mesa. Barricades and washouts blocked Slater’s path to follow us in the car, but at every obstacle he found a gravel path that vehicles before us had carved out. He passed us and headed up the road to set up camp at the top. 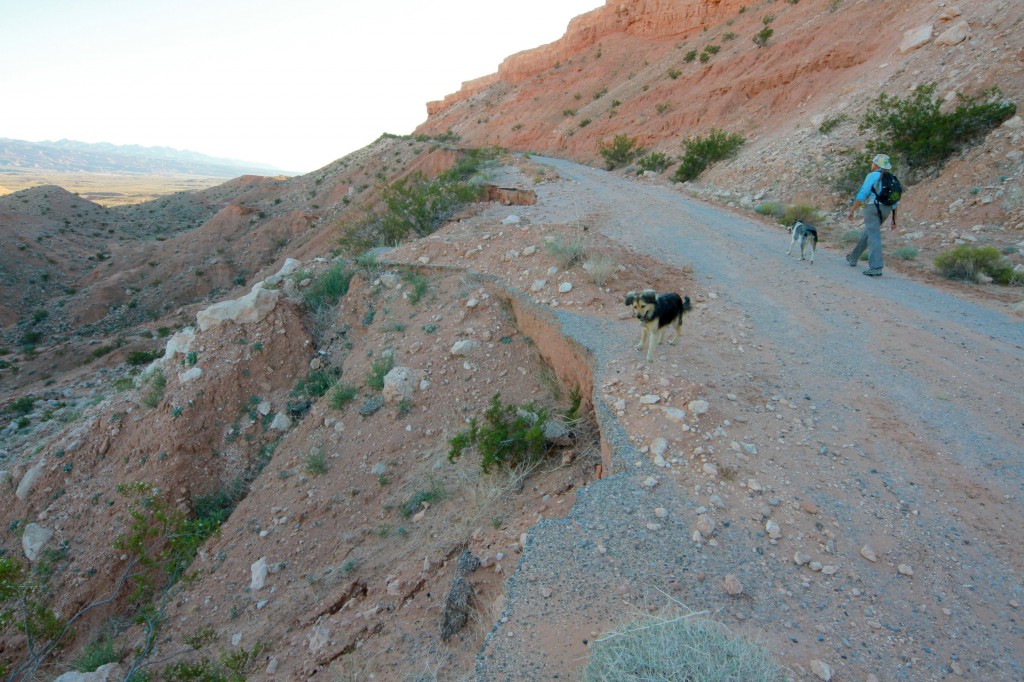 As we climbed higher, the road's condition worsened.

Somehow, Slater maneuvered up the crumbling hillside, past sheer cliffsides where more than half of the pavement has dropped off down to the desert floor below. 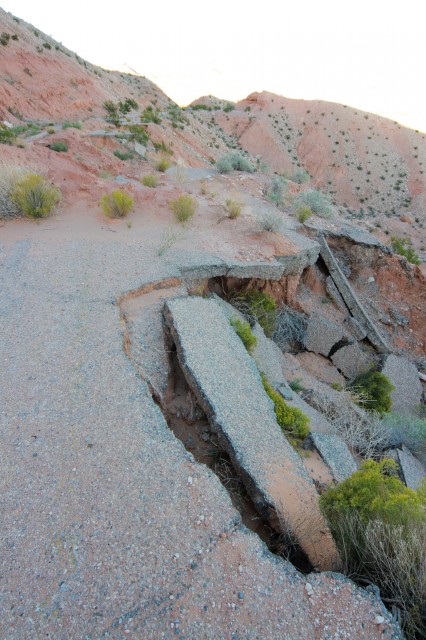 I am relieved that I wasn't in the car when Slater drove up this ghost of a road. 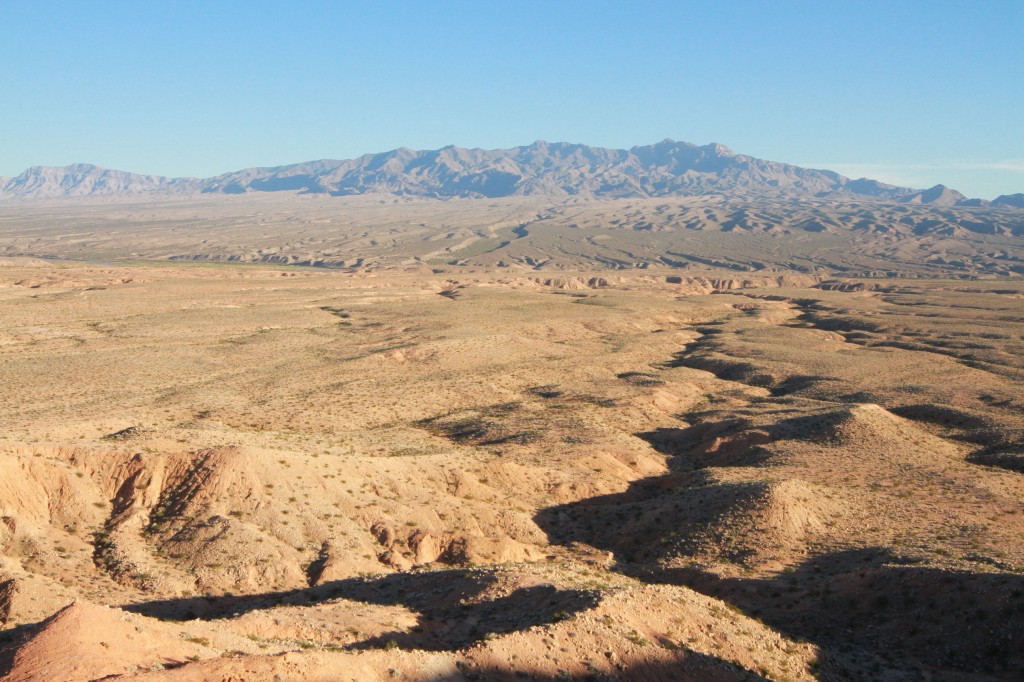 the view from the top

At the top of the plateau, the road flattened and took us on a straight line through an expanse of cacti and inhospitable rock. We moved through the desert, hop-scotching with Slater along the long-lost road with no name. 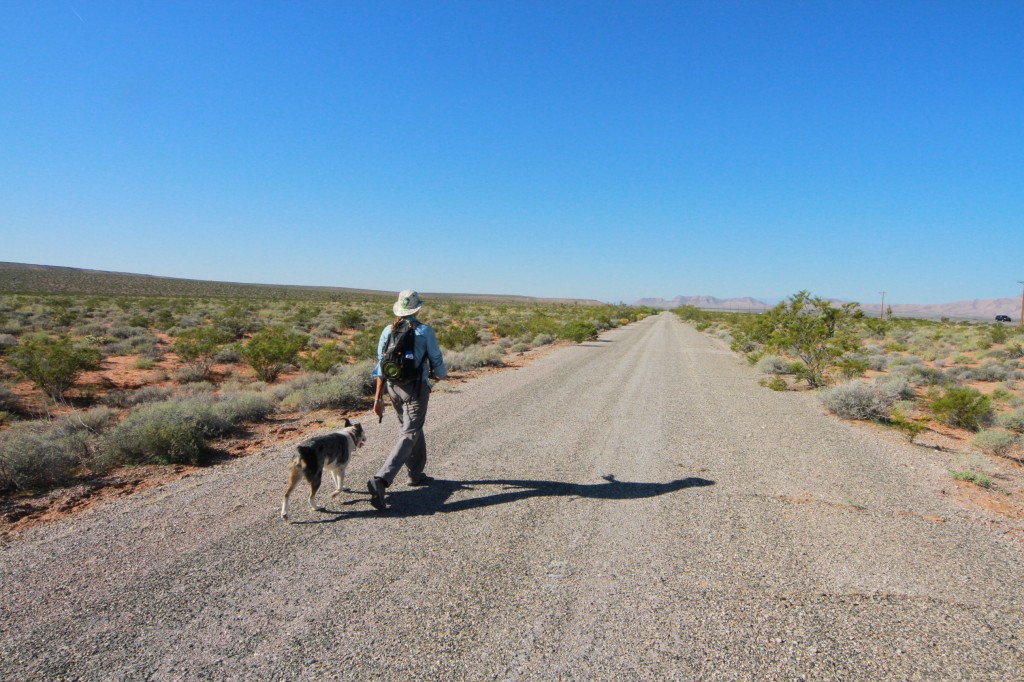 From studying the map, we knew that we would run out of road eventually and have to pick our way across the desert for several miles, following along I-15 and meandering around scrub brush and sketchy terrain. With great anticipation, we walked to the end of the paved road and into much-less-traveled territory.  Rob, if you’re reading – we wished you could have been there for this one. It was by far one of the coolest days of walking of this whole insane thing. 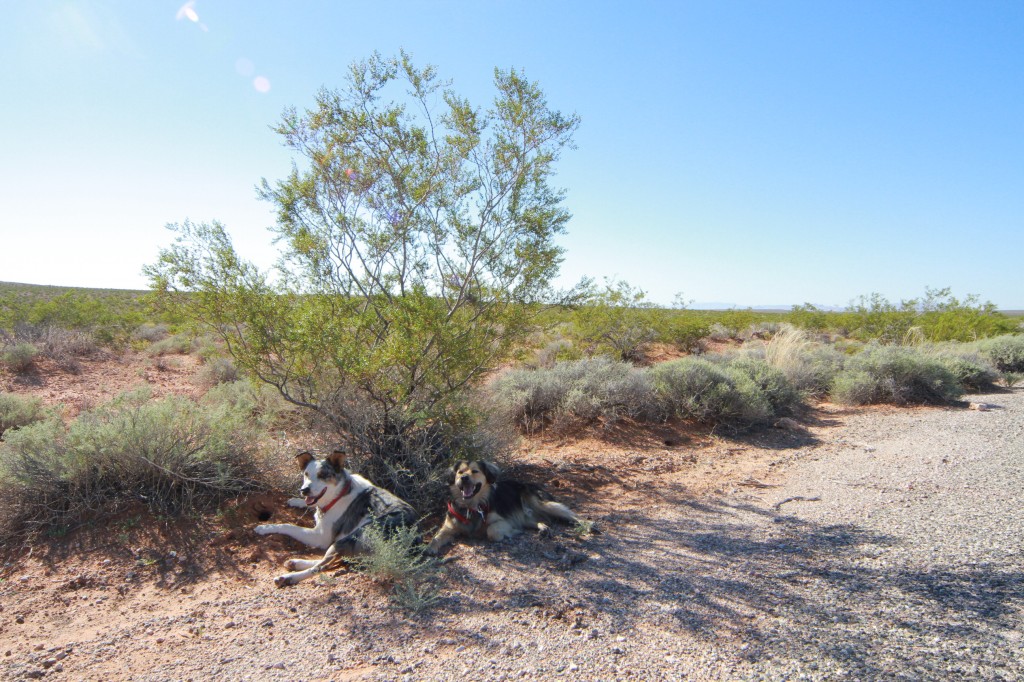 At one point, we came to the edge of a deep wash that quickly crumbled into a deep, wide ravine, leading far down to the desert floor. Our rough path dead-ended, and we had to scramble through the barbed-wire fence near I-15’s corridor to get around the scar in the earth. Back on the wild side of the fence, we followed Max to the edge of the deep to have a look-see. 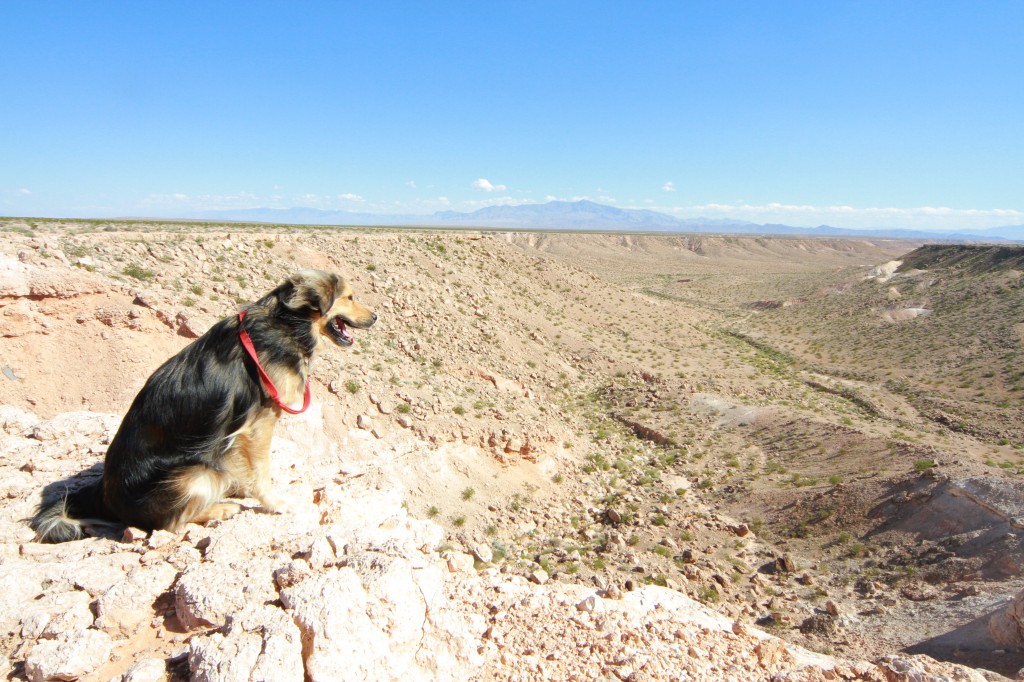 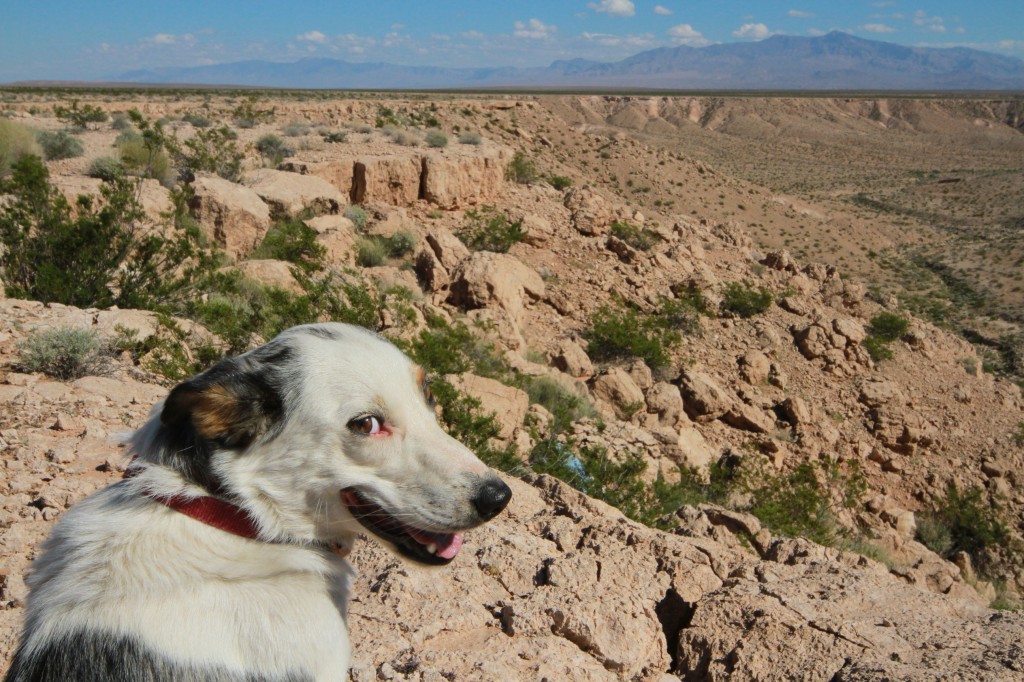 And on we walked, scrambling across the rocky substrate. We stumbled upon a trail marker for the Old Spanish Trail, which we have met up with and followed in sections since western Utah. 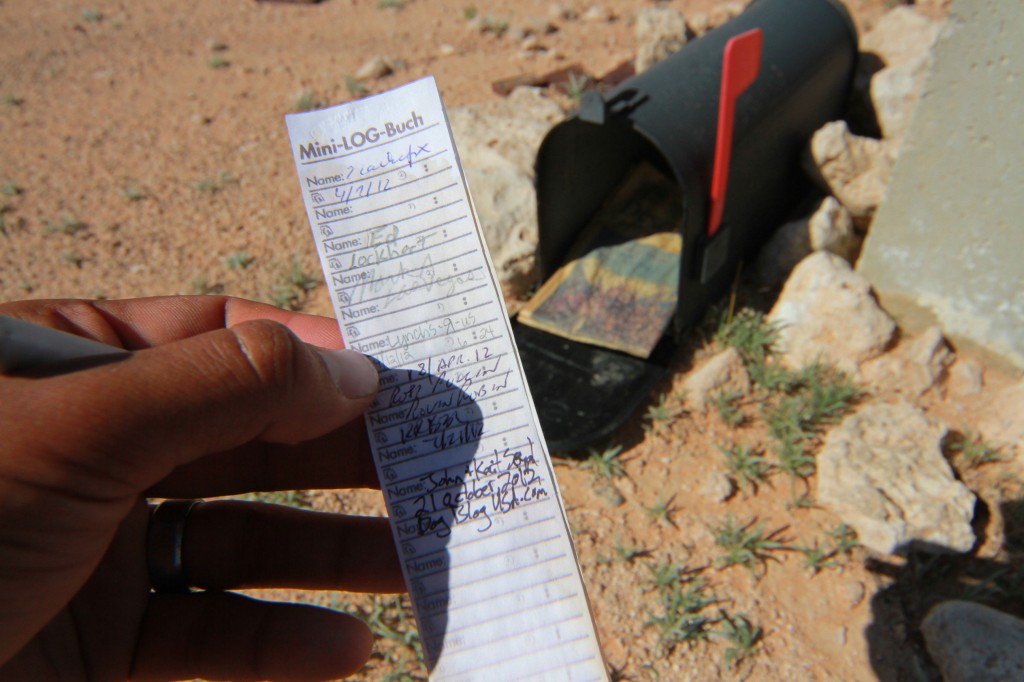 a register for the Old Spanish Trail.

As we came to overlook Moapa Valley, the ground dropped sharply again into another deep wash. We had no choice but to climb down and walk along the crumbling edge to get around it, as there was no space between the drop and the interstate. Across the wobbly boulders, we finally came to the top of the valley. It was truly a sight to behold. 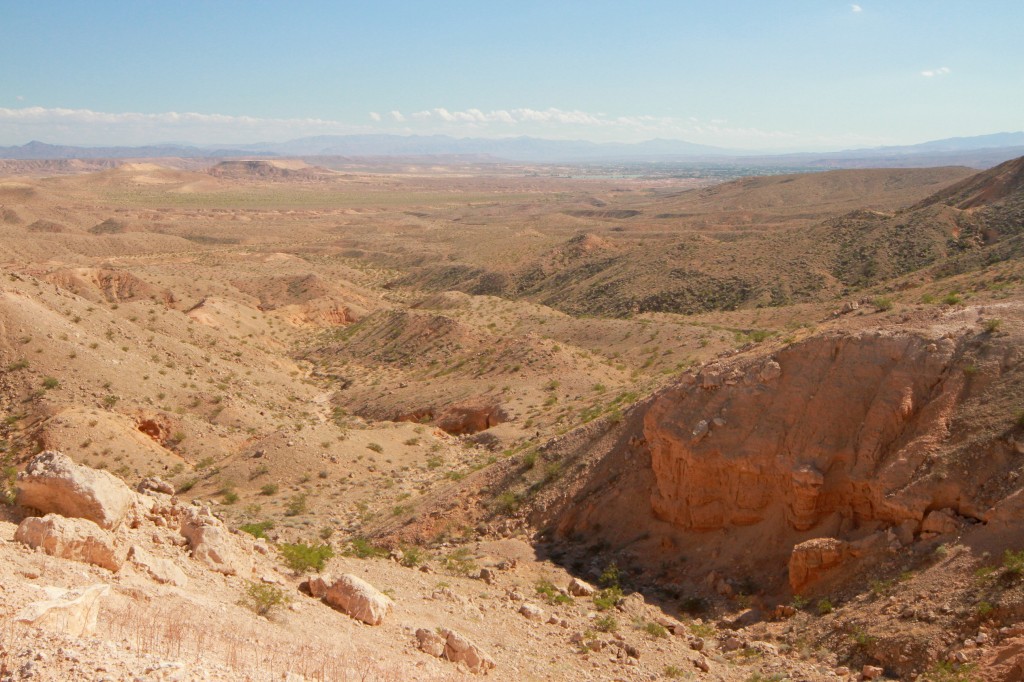 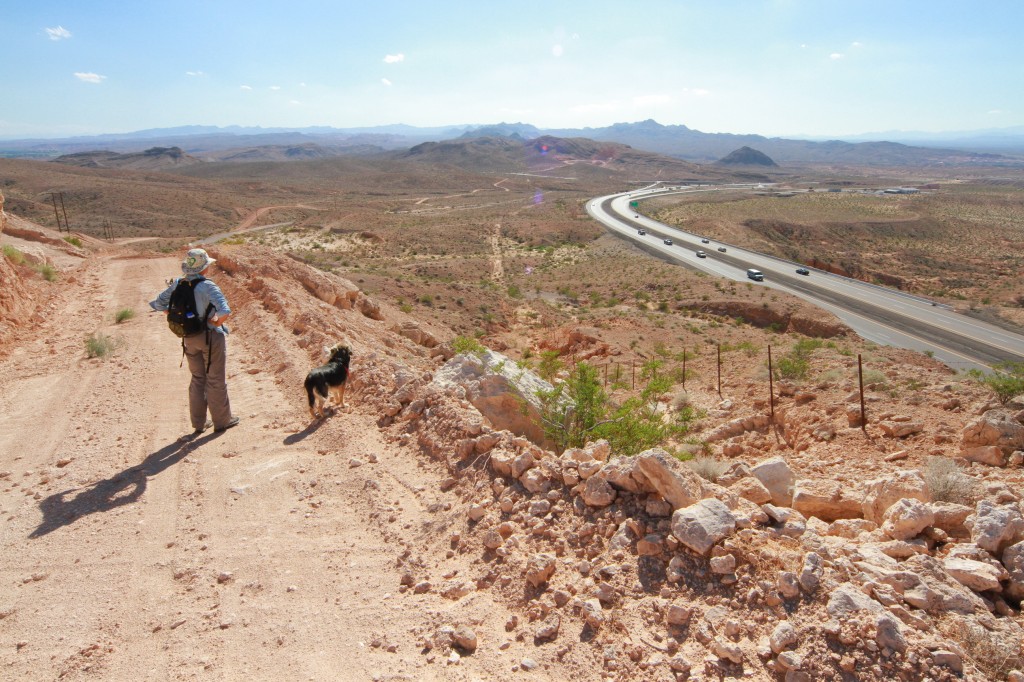 Looking down upon I-15. So strange that nobody on that road could see the valley, just over the ridge.

The next day, things took a turn for the frustrating. We were still making our way roughly parallel to I-15, which was un-walkable. A mere 54 miles from the Vegas sprawl, we found ourselves walking across strange dirt roads toward power plants and mining operations. As Kait and I picked our way along some railroad tracks to meet up with Jon, my phone rang. “Hey, man, where are you guys? Security says we are on private property, and they have to escort us back out.” Bad news. The power company hadn’t seen fit to label their roads and lands as private, and so we had wandered deep into a place where we found ourselves most unwelcome. The rent-a-cop led us back to the road, and we were left with a frustrating predicament: Either we would have to backtrack and walk down into Moapa Valley, past Lake Mead and through Valley Of Fire State Park (which would add 20+ miles to our route,) or drive 20 miles northwest to find another passable route down the Great Basin Highway. 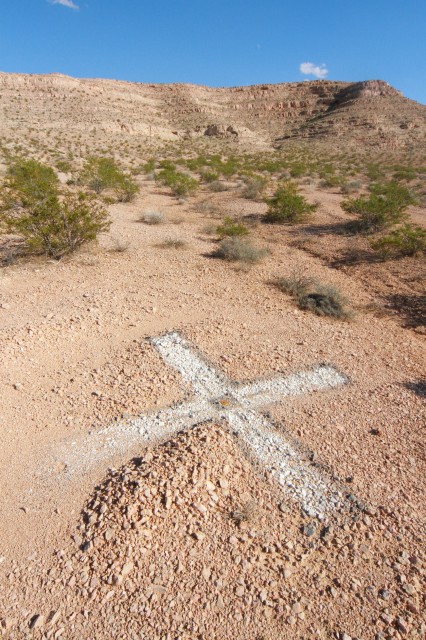 After much frustration and waffling on the decision, we decided to phone a friend. I called Tyler, walker extraordinaire, and told him of our predicament. He shed some light on the Valley of Fire route – the path he walked last year – and said that even if we backtracked and walked those extra miles, we would end up screwed and dead-ended once again a little further up 15. No matter how we cut it, we would have to skip ahead before we would reach Vegas. We studied the map further, and decided to take the re-route up toward 93 – a 20-mile car ride that moved us no closer to Vegas, but rather circled us around to a Northern approach. We lost the miles we walked into private property, and moved from 54 miles west Vegas, to 55 north of the city instead. No loss, no gain – except for a little wiggly gap in our steady line across the map. Other than the silliness and wrong turns outside of Grand Junction, that’s the first true re-route we have had to do since our similar move in West Virginia. We weren’t happy about it, but Tyler helped us make the decision. 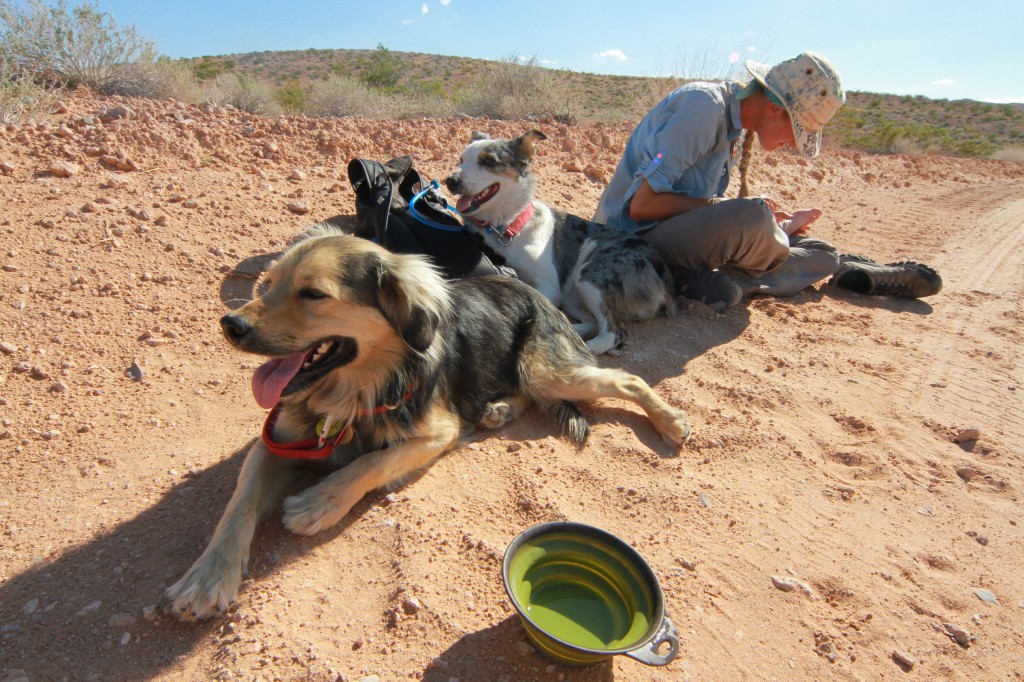 Then, the fun really started. As we started walking the 50-mile southbound stretch of 93, The Great Basin Highway, the wind began to blow against us, coming hard from the south. The gusts were steady and unyielding, and easily topped 30 mph. The forces of nature conspired to make us pay for our reroute. To make matters worse, 93 had very little paved shoulder – just a hard-sloping grade of hideous gravel, which we had to slog through, pushed around by the buffeting wind. For two days straight. The sandy soil let loose of its purchase and whipped across our faces, raking deep into our shiny eyes. It all sucked most tremendously. 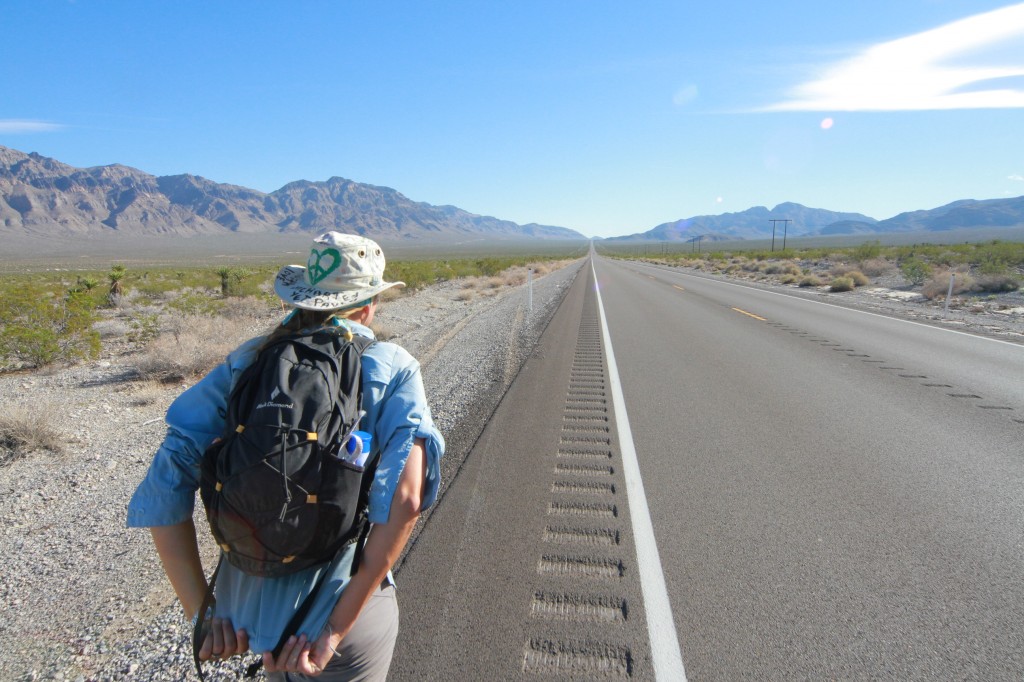 The closer we got to Vegas, the more an oppressive military presence showed its face – strange installations rose up on mountainsides; giant rusted hatches perforated the basin floor; blackhawks and fighter jets and bombers made their rounds up and down the basin. All day they screamed and roared overhead, and at night they hovered and boomed over our tents in the desert, searchlights on and scrimmage-running in the dark. The last night before reaching the sprawl, we camped about 10 miles from Nellis Air Force Base. 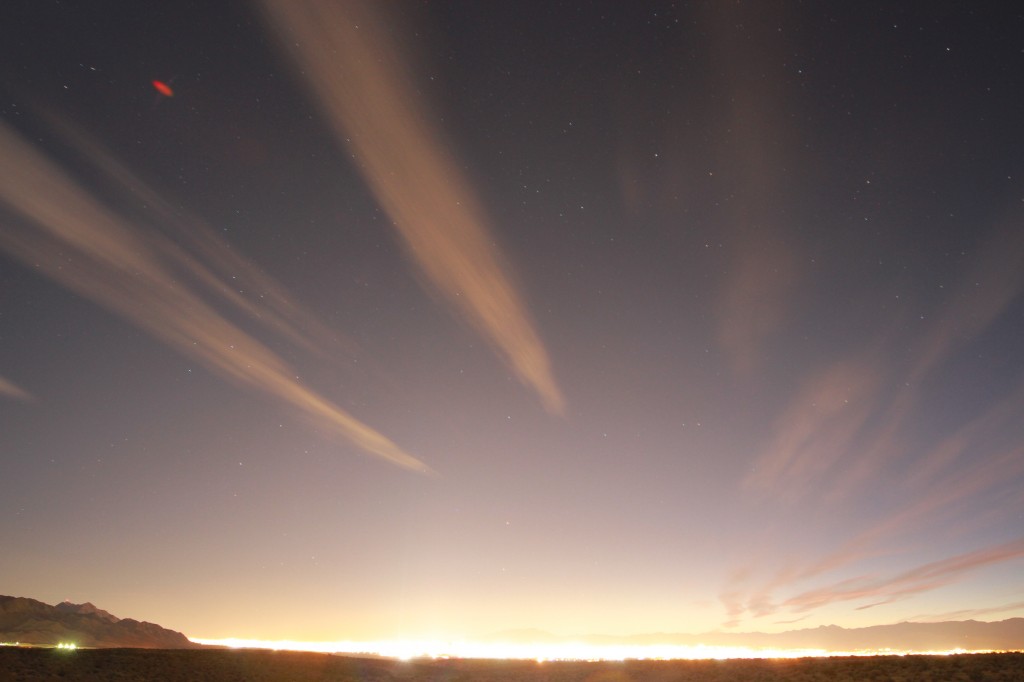 the unholy glow of Sin City.

The next morning, we rose early and started our long strange walk into the heart of the beast. 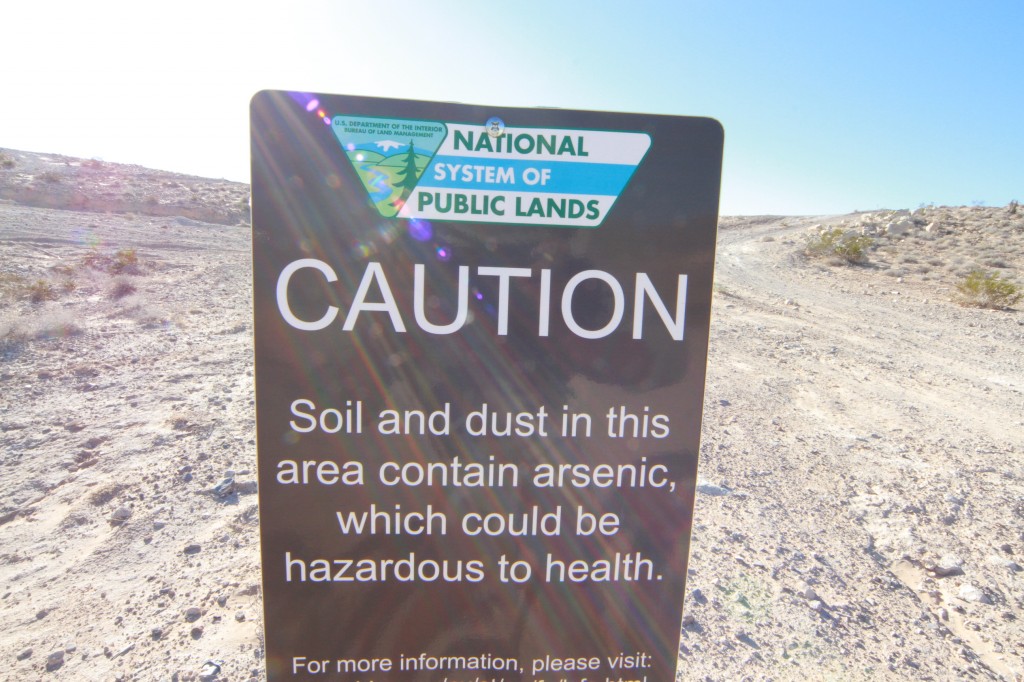 ...we probably shouldn't have camped here.

We passed Nellis Air Force Base while I talked with our long-lost friend, Scott, on the phone from Albuquerque. Scott grew up in Nevada, and regaled me with stories of sandy grit in his teeth, unrelenting desert heat and wind, and sketchy government goings-ons. He informed me that almost all of the land in Nevada is Federally owned – very little is owned by the public. As a result, this state was the proving grounds for the Manhattan project, the development of the Atomic bomb, and many, many other insidious and shadowy military projects. Black budgets, cover-ups, experiments carried out at the expense of the unsuspecting, sparsely populated towns of the desert. He said he remembered a collective look of desperation and hopelessness on the faces of his people, as they eked out their lives in this heavily poisoned land. “Don’t drink the water, don’t breathe the air.” Good God. 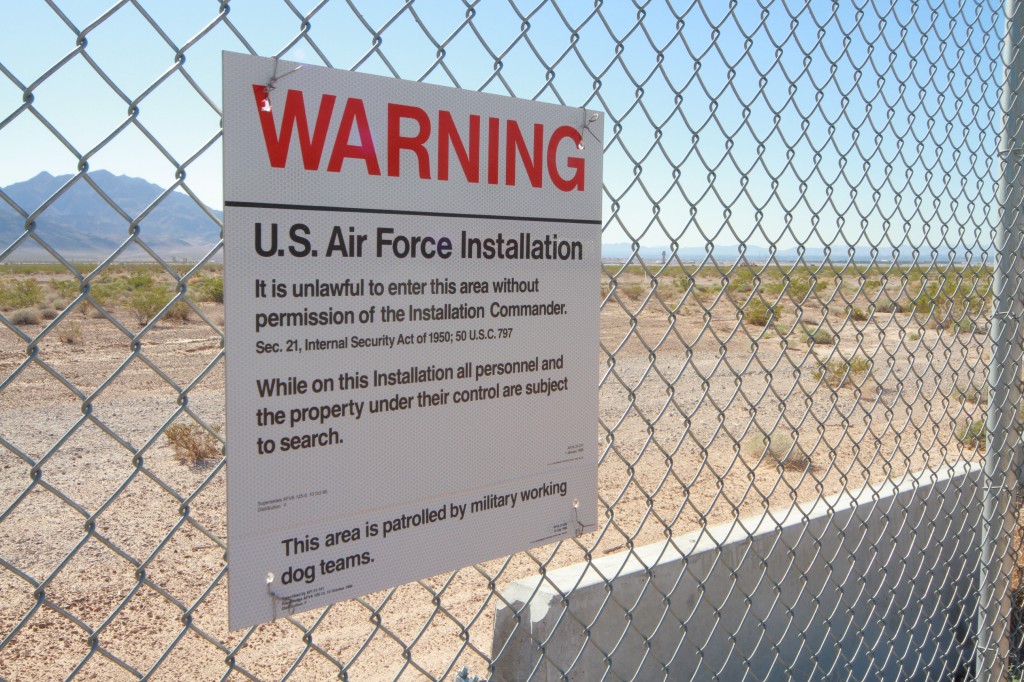 Now that we are deep in this city of sin, we are taking a few days off to spend time with my parents (they came to visit, here, of all places.) We shall soak up the weird and sad and opulent excesses, and then quite happily leave it all behind to walk out into the desert again. Bring on the culture shock.

7 Responses to walking to the end of the world